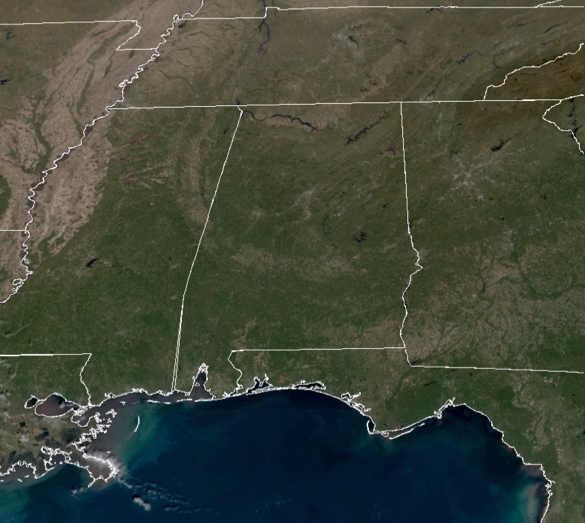 It was another cold morning across the state with 20s, 30s, and 40s widespread, but again this afternoon under a sky full of sunshine, temperatures are rebounding into the low and mid 60s for most locations. Expect another cold night with 30s common and yes frost could certainly be an issue overnight and in the morning. Our flow begins to switch from the east-southeast over the next 24 hours, so temperatures should begin to moderate for tomorrow and Friday. Highs in the upper 60s are expected tomorrow, while low 70s return on Friday.

FRIDAY NIGHT LIGHTS: For the high school playoff games Friday night, the sky will be clear with temperatures falling through the 50s.

IOTA DISSIPATES: But the remnants of Iota are moving toward the west near 12 mph, and this general motion is expected to continue today. Maximum sustained winds are near 30 mph with higher gusts. The estimated minimum central pressure is 1006 mb (29.71 inches). It will still produce gusty winds and heavy rainfall over Central America the next 24 hours.

ELSEWHERE IN THE TROPICS: Two areas of interest the NHC is monitoring. 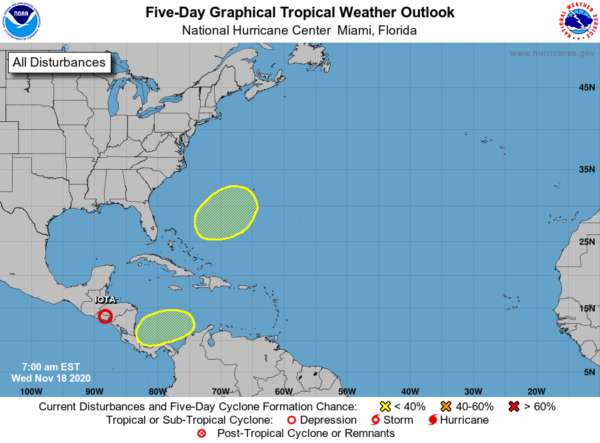 1. A broad area of low pressure could form in a day or so over the southwestern Caribbean Sea. Any development of this system is expected to slow to occur during the next several days while the system moves slowly west-southwestward or westward across the southwestern Caribbean Sea. Regardless of tropical cyclone formation, areas of heavy rain are possible during the next several days from Nicaragua southward across Central America and into Colombia. These rains could cause new flooding concerns, especially across previously inundated areas. Formation chance through 5 days…low…20 percent.

2. A non-tropical area of low pressure could form between the Bahamas and Bermuda by early next week. The system could gradually develop subtropical characteristics through the middle of next week while it moves northeastward. Formation chance through 5 days…low…20 percent.

If these two systems do develop, the next two letters in the Greek alphabet are Kappa and Lambda.

THE ALABAMA WEEKEND: Both Saturday and Sunday will feature highs in the low to mid 70s. Saturday looks generally sunny, while Sunday will feature a few more clouds as moisture levels rise ahead of a front. Sunday should remain dry, but we will at least mention an isolated shower by the end of the day across the state.

FOOTBALL WEATHER: Saturday, Alabama hosts Kentucky (3:00p CT kickoff at Bryant Denny Stadium)… the sky will be sunny with temperatures in the mid 70s at kickoff, falling back into the 60s during the second half.

Auburn hosts Tennessee Saturday evening (6:00p kickoff at Jordan Hare Stadium)… a great night for football with a clear sky. Temperatures will fall from the mid 60s at kickoff, into the upper 50s by the final whistle.

WORLD TEMPERATURE EXTREMES: Over the last 24 hours, the highest observation outside the U.S. was 110.5F at Zumbo, Mozambique. The lowest observation was -52.1F at Ojmjakon, Russia.

WEATHER ON THIS DATE IN 1873: A severe storm raged from Georgia to Nova Scotia causing great losses to fishing fleets along the coast. In Maine, the barometric pressure reached 28.49 inches at Portland.