It was another cold start to the day with widespread 30s and 40s, but our flow begins to switch from the east-southeast today, so temperatures are moderating with mid and upper 60s this afternoon, and highs tomorrow should be on either side of 70° across much of North/Central Alabama. Today is another day when it is almost impossible to find a cloud in the Alabama sky, with the exception of along the immediate Gulf Coast. 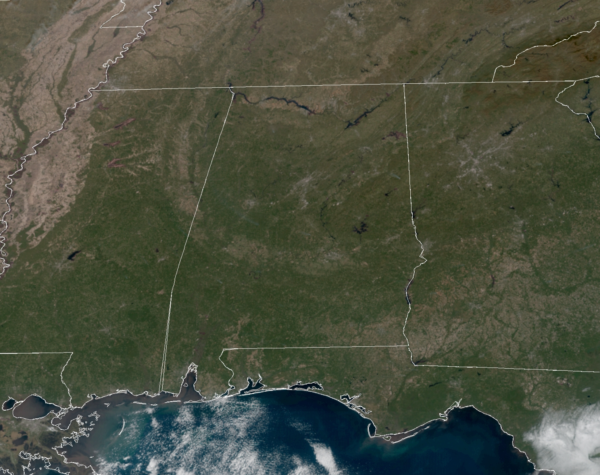 FRIDAY NIGHT LIGHTS: For the high school playoff games Friday night, the sky will be clear with temperatures falling through the 50s.

FOOTBALL WEATHER: Saturday, Alabama hosts Kentucky (3:00p CT kickoff at Bryant Denny Stadium)… the sky will be sunny with temperatures in the mid 70s at kickoff, falling back into the 60s during the second half.

Auburn hosts Tennessee Saturday evening (6:00p kickoff at Jordan Hare Stadium)… a great night for football with a clear sky. Temperatures will fall from the mid 60s at kickoff, into the upper 50s by the final whistle.

IN THE TROPICS: Two areas of interest the NHC is monitoring. If these two systems do develop, the next two letters in the Greek alphabet are Kappa and Lambda. 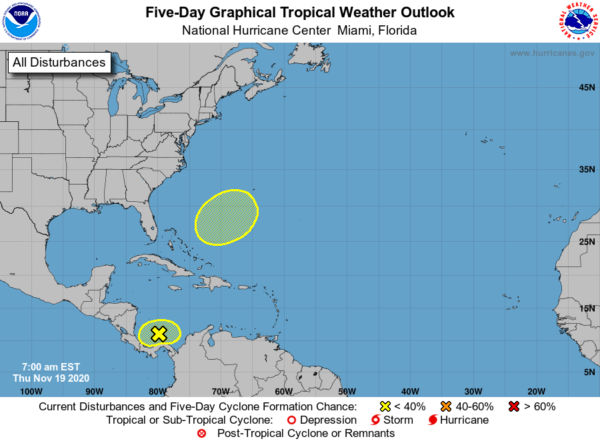 1. An area of disorganized showers and thunderstorms located over the far southwestern Caribbean Sea just off the northern coast of Panama is associated with a broad area of low pressure. Development of this system, if any, is expected to be slow to occur while it drifts westward across the southwestern Caribbean Sea during the next several days. Regardless of tropical cyclone formation, areas of heavy rain are possible during the next several days across portions of Central America from Nicaragua southward to Colombia, potentially causing additional flooding in previously inundated areas. Formation chance through 5 days…low…10 percent.

2. A non-tropical area of low pressure could form between the Bahamas and Bermuda by early next week. The system could gradually develop subtropical characteristics through the middle of next week while it moves northeastward over the western Atlantic. Formation chance through 5 days…low…20 percent.

WORLD TEMPERATURE EXTREMES: Over the last 24 hours, the highest observation outside the U.S. was 107.6F at Moomba Airport, Australia. The lowest observation was -51.9F at Ojmjakon, Russia.

WEATHER ON THIS DATE IN 1921: The Columbia Gorge ice storm finally came to an end. In Oregon, 54 inches of snow, sleet and glaze blocked the Columbia River Highway at the Dalles. Apart from traffic on the river itself, all transportation between Walla Walla WA and Portland OR came to a halt. Nine trains were stopped as railroads were blocked for several days.

Most Of Alabama Dry Through The Weekend : The Alabama Weather Blog