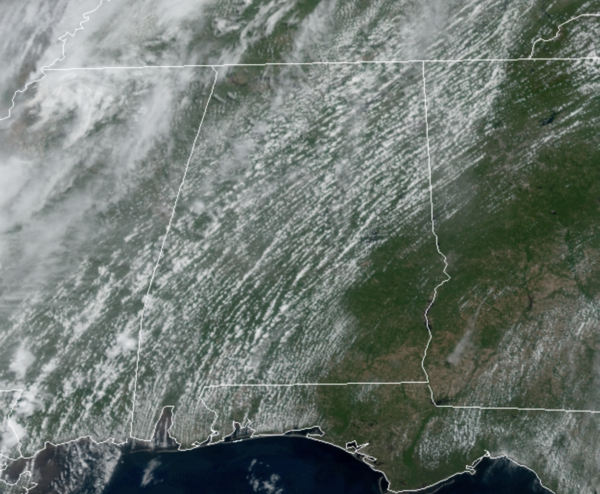 It is another warm and humid day across Alabama with a mix of sun and clouds we are seeing temperatures surge well into the 80s this afternoon. Most locations will remain dry today as rain chances are generally less than 30%. Like yesterday, we could see a few stronger storms over Northwest Alabama and the SPC has a “marginal risk” of severe storms in that part of the state today, as a few storms could produce hail and gusty winds later today. 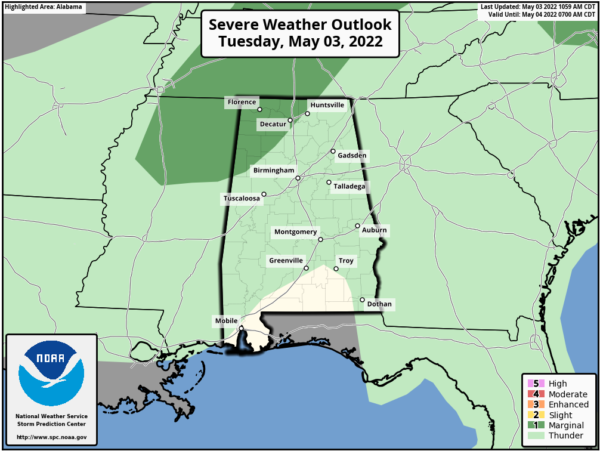 For tomorrow, showers and storms should be a little more numerous over the northern half of the state as a weakening cold front approaches the state. Highs again tomorrow will be in the 80s.

END OF WEEK FRONT: Thursday looks warm and dry, but a band of organized showers and storms will likely push into the state late Thursday night into early Friday morning as a front moves into the state. The SPC has defined a “marginal risk” (level 1/5) of severe thunderstorms for much of North and West Alabama in their “Day 3” outlook, which runs through 7am CT Friday. For now they have not defined a risk beyond 7am Friday. 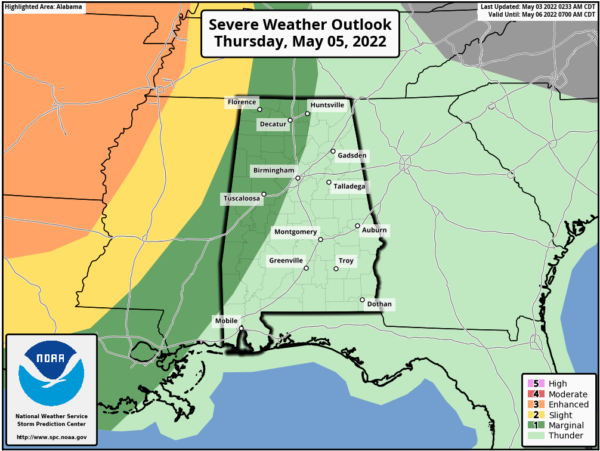 The higher severe weather probabilities are to the west Thursday. Storms could produce strong winds and hail as they move through Alabama late Thursday night, likely after midnight. The tornado threat is very low, but not zero. Most of the rain and storms will end early Friday morning, followed by a clearing sky late Friday afternoon as drier air returns; the high will be in the upper 70s.

MOTHER’S DAY WEEKEND: Saturday and Sunday will be dry and pleasant day with a good supply of sunshine both days.Highs will range from the upper 70s to lower 80s across North/Central Alabama, while lows drop into the 50s.

CRANKING UP THE HEAT: Much of the week looks quiet, although a few widely scattered showers could pop up from time to time, however, it looks like we will see our hottest week of weather so far in 2022. The upper-ridge builds in across the region, and we are likely see high temperatures closer to 90° at times next week.

WORLD TEMPERATURE EXTREMES: Over the last 24 hours, the highest observation outside the U.S. was 114.8F at Goure, Niger. The lowest observation was -98.9F at Vostok, Antarctica.