The morning clouds are giving way to afternoon sunshine today an upper ridge will build in, keeping us dry, and producing above average temperatures for early November the next couple of days. Highs today are in the mid 70s, followed by upper 70s tomorrow and Friday. Nights are fair and cool with 40s and 50s.

THE ALABAMA WEEKEND: A front will bring showers into parts of the state Saturday afternoon and evening. For now it looks like the best chance of rain will be along and north of I-59. A rumble of thunder is possible, but there is no risk of severe storms as the dynamic support will be weakening quickly. Otherwise, Saturday will be a mostly cloudy day with a high between 76 and 80 degrees. The front will stall and wash out Sunday; we will mention a chance of scattered showers Sunday statewide. The sky will be mostly cloudy with a high in the upper 70s again. The rain Sunday won’t be especially widespread.

FALL BACK: Time changes this weekend as we fall back onto standard time. That will give us an extra hour of sleep Saturday night, but also mean sunset Sunday in Birmingham will be 4:50 PM CST.

FOOTBALL WEATHER: The sky will be clear Friday night for the high school playoff games; temperatures will fall from the low 70s at kickoff, into the upper 60s by the final whistle.

UAB will host UTSA Saturday at Protective Stadium in downtown Birmingham (2:30p CT kickoff)… the sky will be cloudy with a chance of showers during the game. Temperatures will be in the low to mid 70s.

Auburn will take on Mississippi State in Starkville Saturday evening (6:30p CT kickoff)… the sky will be cloudy with a chance of some rain, mainly during the first half. Temperatures will be in the low 70s at kickoff, and in the upper 60s by the final whistle.

And, Alabama will be in Baton Rouge to play LSU in “Death Valley” (6:00p CT kickoff)… the sky will be cloudy with a lingering shower possible during the first half. Temperatures will be close to 70 degrees during the game.

NEXT WEEK: We will maintain a chance of scattered showers Monday, but the rest of the week is looking dry and mild with highs in the 70s.

TROPICS: Lisa is now a hurricane and will make landfall as hurricane in Belize late tonight. Tropical Storm Martin is gaining strength as well, and is forecast to become a hurricane, but it is no threat to land. Also, a complex, broad area of low pressure is expected to develop this weekend near the Greater Antilles or over the southwestern Atlantic. Some slow subtropical or tropical development of this system is possible afterward while it moves generally northward to northwestward. Formation chance through 5 days…low…20 percent. If this develops, the next name up is Nicole. Hurricane season ends November 30th. 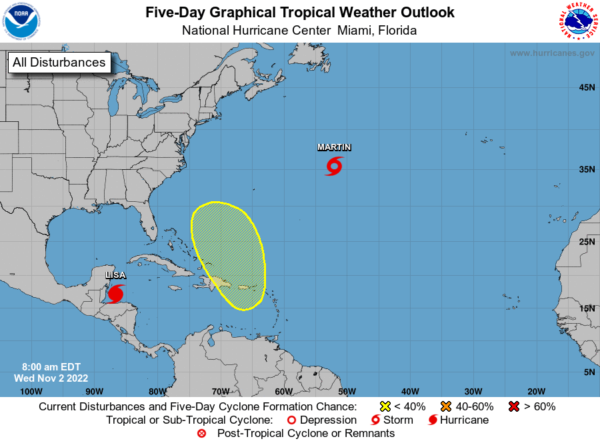 WORLD TEMPERATURE EXTREMES: Over the last 24 hours, the highest observation outside the U.S. was 109.0F at Ondangwa, Namibia. The lowest observation was -67.7F at Vostok, Antarctica.