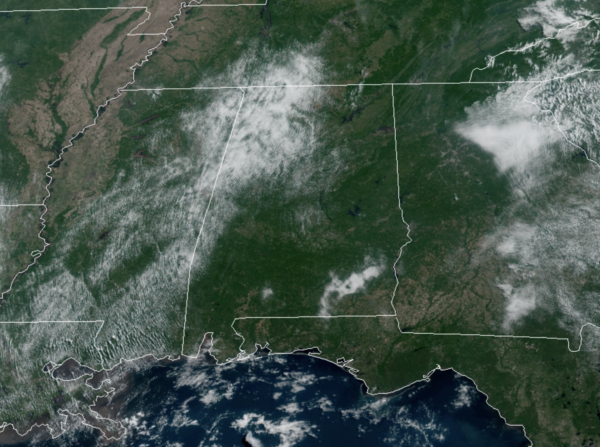 Lots of sunshine in the forecast the rest of today with temperatures in the mid to upper 80s across the state. Not at all a bad Memorial Day in the weather department. More of the same tomorrow and Wednesday as afternoon temperatures approach the 90° mark. Rain chances are near zero, but a stray shower is certainly possible the next few afternoons.

Rain chances will increase a bit for the second half of the week, so we will mention the chance of scattered showers Thursday and Friday as a weakening front approaches from the north, but the rain won’t be especially widespread or heavy. Otherwise, look for a mix of sun and clouds both days with highs in the mid to upper 80s. Pretty close to average for the first few days of June.

THE ALABAMA WEEKEND: Routine early June weather as the sky will be partly to mostly sunny Saturday and Sunday with highs between 88 and 92 degrees. Odds of any one spot getting a cooling shower will be very low, generally 20 percent or less.

NEXT WEEK: We are looking at a pretty routine week for early June; partly sunny days, fair nights, and the chance of “scattered, mostly afternoon and evening showers and thunderstorms” on most days. Highs will stay close to the 90 degree mark

IN THE TROPICS: Hurricane Agatha in the Pacific will make landfall along the Mexican Coast later today. The system will cross through Mexico and emerge in the southwest Gulf of Mexico in the coming days. Gradual development is possible within this system in the far southwest Gulf of Mexico around mid-week or in the northwest Caribbean by the latter part of this week as it drifts eastward or northeastward. Regardless of development, locally heavy rains will be possible across southern Mexico, the Yucatan Peninsula, Guatemala, and Belize through the week. Formation chance through 5 days…medium…40 percent. If it develops it would be Alex. 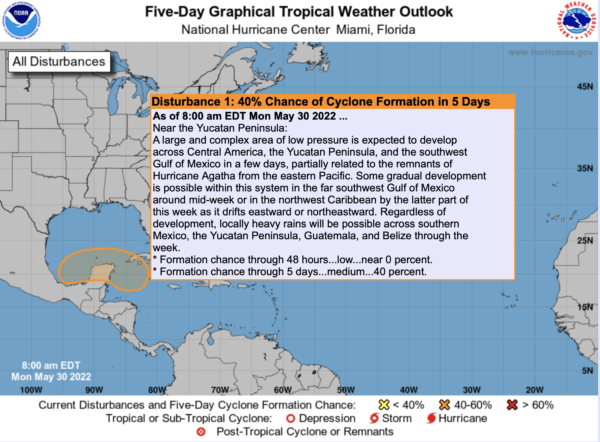 WORLD TEMPERATURE EXTREMES: Over the last 24 hours, the highest observation outside the U.S. was 118.4F at Jacobabad, Pakistan. The lowest observation was -91.5F at Concordia, Antarctica.