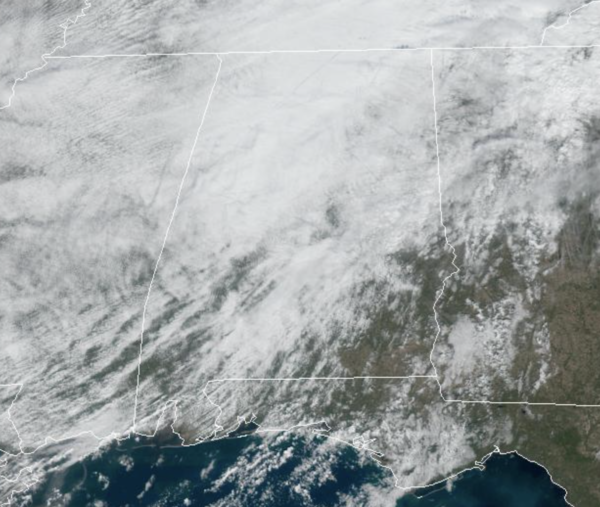 We are seeing more clouds than sun today with temperatures surging into the upper 60s and lower 70s. A few showers are possible as southerly flow increase ahead of the approaching cold front, but overall the weather today is fairly nice for mid-January.

STORMS TOMORROW: Not much change in the forecast tomorrow…A cold front will bring a band of rain and thunderstorms into Alabama through the day. The SPC maintains a “slight risk” (level 2/5) of severe storms for most of Alabama tomorrow. Storms will enter Northwest Alabama tomorrow morning, and will progress through the state during the day. The storm mode is expected to be linear, meaning the main threat will come from damaging wind gusts. A brief tornado can’t be totally ruled out, but the threat is relatively low. Rain amounts of 1/2 to 1 inch are expected. Otherwise, the day will be mostly cloudy, mild, and windy with a high in the mid to upper 60s. Pressure gradient winds (not related to thunderstorms) could gust to 35 mph at times.

COLDER WEEKEND: The weather turns sharply colder Friday behind the front with a mix of sun and clouds and a brisk north wind. A few snow flurries are possible during the morning hours over far North Alabama, but no impact or accumulation is expected. Temperatures won’t get out of the 40s across North Alabama. The weekend will feature sunny cool days and clear cold nights…temperatures will be below freezing over the northern half of the state both Saturday and Sunday morning. Highs will struggle to climb out of the 40s again on Saturday, but 50s will be common on Sunday.

NEXT WEEK: The weather looks rather unsettled with multiple rounds of rain and thunderstorms likely…the first one coming Monday night into Tuesday morning. Highs will be mostly in the 60s.

WORLD TEMPERATURE EXTREMES: Over the last 24 hours, the highest observation outside the U.S. was 115.3F at Vioolsdrif, South Africa. The lowest observation was -75.6F at Delyankir, Russia.