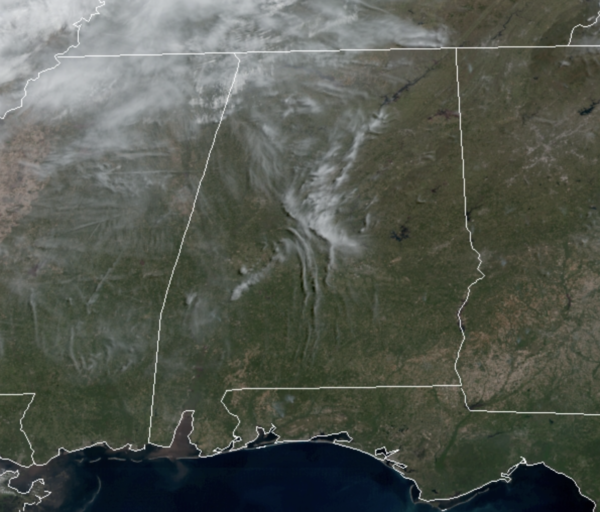 Lots of sunshine in the Alabama sky today, and that is allowing temperatures to surge into the mid-70s across North/Central Alabama. Enjoy the rest of today, because clouds will increase tonight ahead of an approaching storm system that will bring unsettled weather to the state tomorrow and Wednesday, including the threat for severe storms and heavy rainfall. The severe weather potential for both days is complex, and somewhat conditional.

SEVERE STORMS RETURN TO ALABAMA: Late today, a MCS (mesoscale convective system) or complex of storms will develop across Eastern Texas and head east across the Mississippi Valley overnight, arriving in Alabama by dawn tomorrow morning. Much of the Southern Mississippi Valley is included in a risk of severe weather tonight. 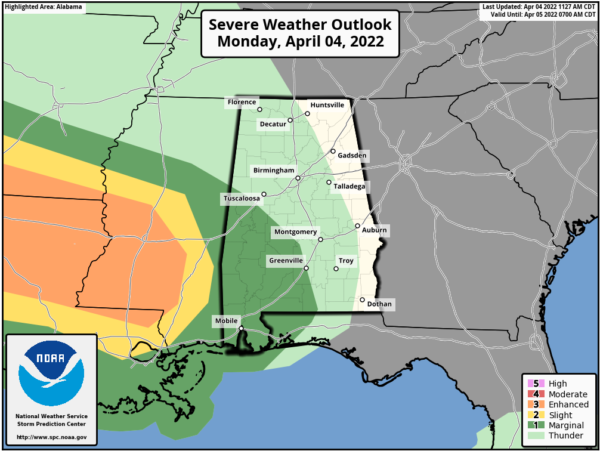 PLACEMENT: For Alabama tomorrow, the SPC maintains an “enhanced risk” (level 3/5) of severe thunderstorms for much of Central and South Alabama…for areas south of a line from Eutaw to Calera Roanoke. A “slight risk” (level 2/5) extends as far north as Fayette, Oneonta, and Gadsden… and the northern third of the state is under a “marginal risk” (level 1/5). 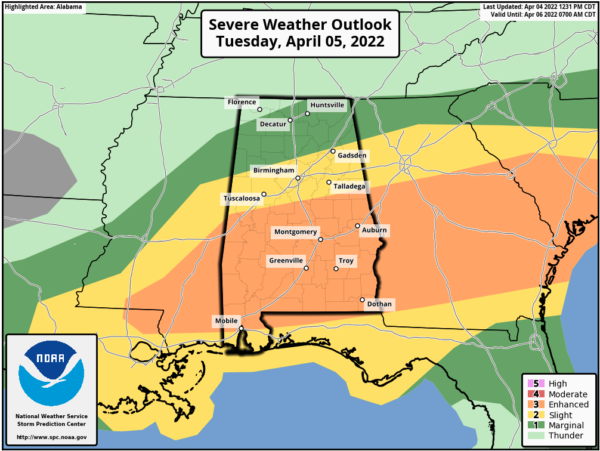 Tomorrow morning, the organized area of rain and storms will move through the state, generally in the 5AM-1PM time frame. There will be little to surface based instability over the northern half of the state, so the severe weather threat will be mainly confined to the South Alabama, where stronger storms will be capable of producing strong winds, hail, and some tornadoes are possible. The rain will be heavy at times statewide tomorrow morning with rainfall totals of 1-2 inches possible. This morning round of convection should really work over the atmosphere.

If the atmosphere can recover (become unstable) from the morning convection, additional storms could develop later tomorrow afternoon and evening. These storms could be severe with potential for hail, strong winds, and isolated tornadoes. Again, this round of storms may or may not happen and is a conditional threat only if the atmosphere recovers behind the morning convection. The main window for this threat comes from 2PM-8PM.

MORE SEVERE STORMS WEDNESDAY: A cold front will drop into the state Wednesday afternoon. This front should cause a line of strong to severe storms to develop Wednesday afternoon and evening. There will be lots of instability available, and the storms along the line will be capable of producing large hail and strong, possibly damaging winds. The tornado threat is low due to a unidirectional wind profile that is forecast to be in place across the state.

For now, the SPC has defined an “enhanced risk” (level 3/5) for parts of North and Central Alabama, including places like Tuscaloosa, Birmingham, Anniston, Gadsden, and Huntsville. The rest of the state is in a “slight risk” (level 2/5). 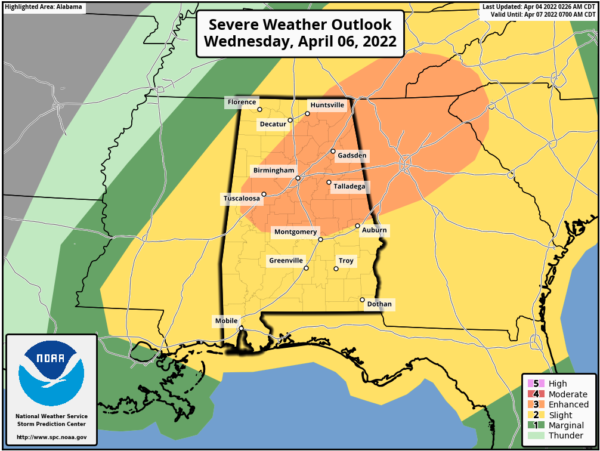 The line of storms will pass through the state between 3PM-10PM Wednesday. Additional rainfall totals of 1-2 inches will be possible, so both tomorrow and Wednesday, we will have to watch for areas of flash flooding.

CALL TO ACTION: As always, be weather aware tomorrow and Wednesday and pay attention to warnings if they are issued. And, watch for updates since the forecast is somewhat complex. Again, this is the core of our severe weather season in Alabama, so events like this are not uncommon.

Be prepared and make sure you have all aspects of your severe weather safety plan ready for action. Be sure you have multiple ways of hearing and receiving severe weather warnings, and an action plan if you are in a tornado warning polygon, take severe thunderstorm warnings seriously too. Have a NOAA Weather Radio in your home and business, properly programmed with a fresh battery in case of power failure. Be sure WEA (Wireless Emergency Alerts) enabled on your phone… this is not an app, but built into every phone sold in the U.S. Check settings, and notifications, and be sure emergency alerts are on. Have the free ABC 33/40 weather app on your phone as a secondary way of getting warnings. Search the App Store for “ABC 33/40 Weather” if you don’t have it already.

Many of you have anxiety about severe weather, especially those that have gone through tornadoes or other kinds of violent weather. Have comfort knowing that even on the biggest severe weather days, odds of any one home being hit by a tornado are very low. But, you have to pay attention and be prepared. We will get through the day together.

COOLER AIR RETURNS: A deep trough will begin to dig down into the eastern half of the U.S. behind the front. Thursday and Friday will be dry with a significant cooling trend; expect partly sunny days with a high in the mid 60s Thursday, and likely only in the upper 50s Friday…well below average for April in Alabama.

WEEKEND FROST/FREEZE THREAT: We expect lows well down in the 30s Saturday and Sunday morning over the northern half of the state, with potential for frost, and a freeze for colder spots. Growers will need to watch temperature forecasts both mornings. Otherwise, the weekend will feature lots of sunshine with a high in the low 60s Saturday, followed by low to mid 70s Sunday.

WORLD TEMPERATURE EXTREMES: Over the last 24 hours, the highest observation outside the U.S. was 113.0F at Goure, Niger. The lowest observation was -95.1F at Vostok, Antarctica.