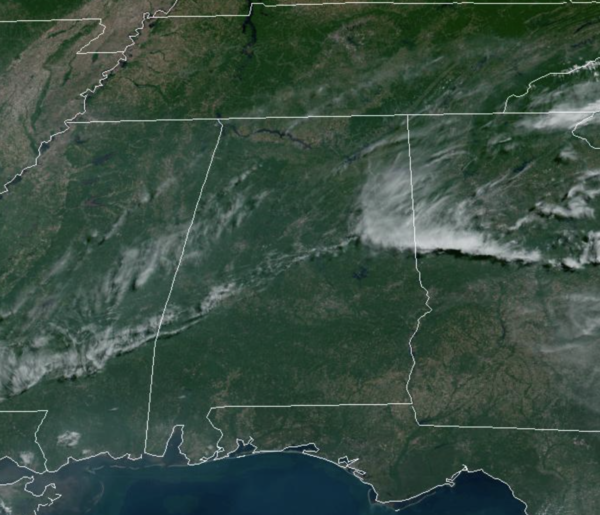 The upper-level ridge remains in place, our temperatures remain very hot and our rain chances very low. The combination of hot temperatures and higher humidity still causing our heat index values to climb to near 105° this afternoon, but as of now, there is no Heat Advisory in effect, but that doesn’t mean one won’t be issued as we head through the day. Advisory or not, it remains dangerously hot.

Today and tomorrow, the sky remains mainly sunny, and highs are generally in the upper 90s with some low 100s. A few blips may show up on the radar either day, but rain chances remain generally less than 10%.

THE ALABAMA WEEKEND: The sky will remain mostly sunny and temperatures will remain hot, but some locations will see isolated afternoon showers and storms. Saturday’s highs will be in the mid to upper 90s, while Sunday’s highs look to drop back into the low to mid 90s for Central Alabama. Rain chances this weekend will be in the 20-30% range.

THE TROPICS: All is quiet with no tropical cyclone development expected through the weekend and into next week.

NEXT WEEK: The ridge slides back to the west, allowing for a more typical summer pattern for Alabama. Highs in the low to 90s each day, and it will be a more humid, allowing for a higher coverage of showers and storms, mainly during there afternoon and evening hours.

WORLD TEMPERATURE EXTREMES: Over the last 24 hours, the highest observation outside the U.S. was 118.9F at Al-Wafra, Kuwait. The lowest observation was -97.6F at Concordia, Antarctica.