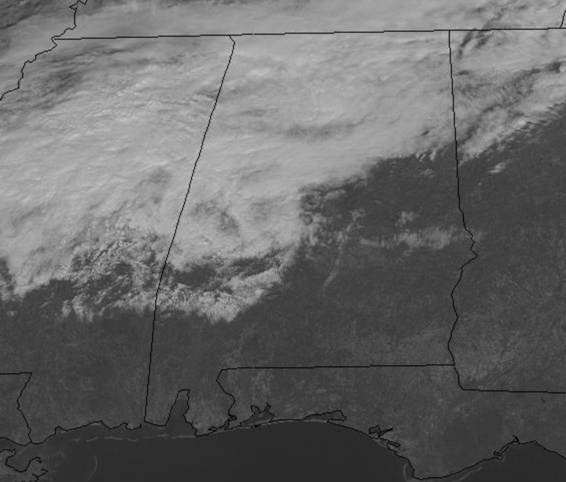 A cold front is moving into Alabama today, and the we have been seeing a steady increase in clouds across the northern half of Alabama through the morning hours. There are even a few spotty showers, but these are few and far between and are not amounting too much due to limited moisture. 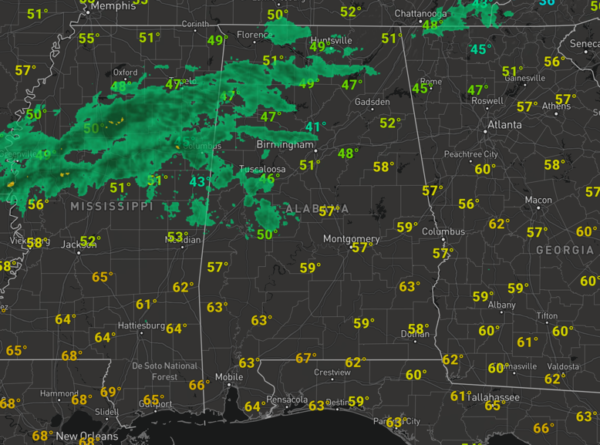 Where it is cloudy with the showers, we are seeing temps in the 40s, while in sunny locations highs this afternoon will be in the mid 50s, while mid 60s are expected across South Alabama. The front settles down into South Alabama tonight and stalls the rest of the week.

REST OF THE WEEK: With the front to the south, tomorrow will be a dry day with a mix of sun and clouds; afternoon temperatures return to the 50s. Clouds return late tomorrow and the weather turns wet Thursday and Friday as waves of energy will track along the stalled front, bringing periods of rain back to the state both days. No risk of severe storms, and probably no thunder as the air will be stable with temperatures in the mid and upper 50s. Rainfall totals Thursday and Friday will be in the 1-2 inch range for much of the state.

WORLD TEMPERATURE EXTREMES: Over the last 24 hours, the highest observation outside the U.S. was 111.0F at Roebourne Airport, Australia. The lowest observation was -71.5F at Verhojansk, Russia.

WEATHER ON THIS DATE IN 1933: Giant Forest, CA received 60 inches of snow in just 24 hours, a state record, and the second highest 24 hour total of record for the U.S.