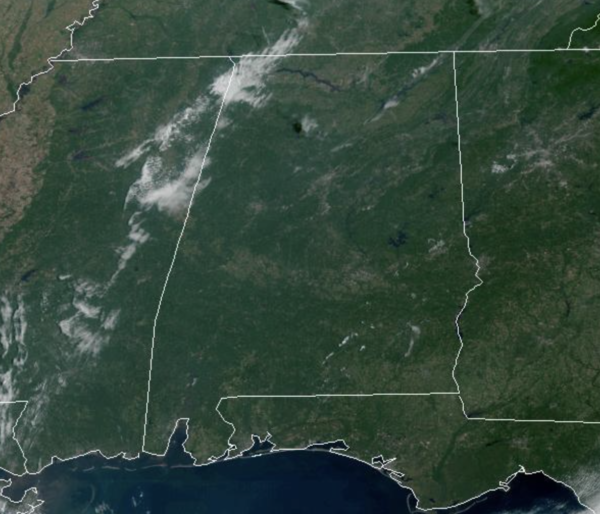 More dry weather this week with lots of sunshine each day. Highs today will be in the upper 80s for most locations, but will be much hotter the rest of the week. A surface high and an upper ridge will will cause sinking air keeping us dry, and will allow for highs to be in the mid 90s tomorrow and Wednesday as rain chances remain near zero.

FALL ARRIVES: A dry cold front will pass through the state Thursday; the day will be partly to mostly sunny with a high in the low 90s, but due to low moisture levels, rain is not expected. Thursday will be the first day of fall as the autumnal equinox occurs at 8:03PM CDT.

FRIDAY AND THE WEEKEND: Behind the front, Friday will be noticeably cooler with a high in the low 80s. Many places over North Alabama will see lows in the 50s early Friday and Saturday morning, making it feel like fall some. Saturday will be a sunny day with a high in the mid 80s. Most of Sunday looks dry with a high in the 80s, but we will bring in a chance of showers Sunday night ahead of another cold front. Rain amounts should be generally light.

NEXT WEEK: Showers end early Monday; the temperatures will hold in the 70s much of the day. Then, the rest of the week looks generally dry with highs in the low to mid 80s, with lows in the 60s, close to average values. 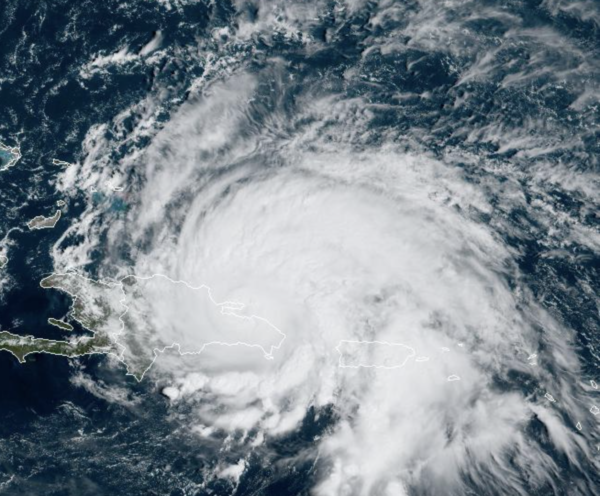 HURRICANE FIONA: The center of Hurricane Fiona was located near latitude 18.8 North, longitude 69.0 West. Fiona is moving toward the northwest near 8 mph. This general motion is expected to continue through tonight, followed by a turn toward the north-northwest on Tuesday and to the north on Wednesday. On the forecast track, the center of Fiona will move over the eastern portion of the Dominican Republic during the next few hours and emerge over the southwestern Atlantic this afternoon. The center is forecast to pass near or to the east of the Turks and Caicos on Tuesday. 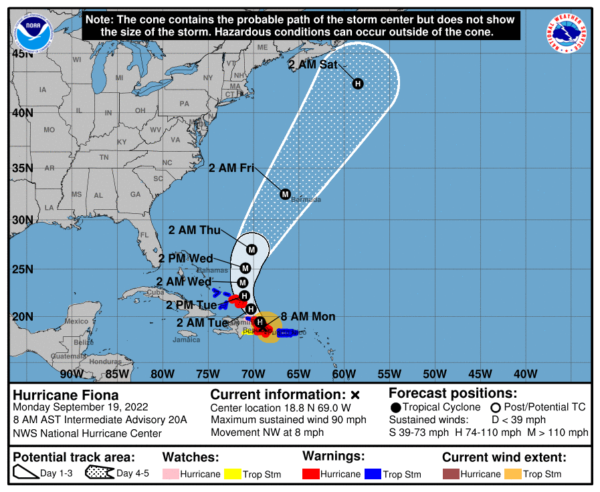 Maximum sustained winds are near 90 mph with higher gusts. Some strengthening is expected during the next few days after the hurricane emerges over the southwestern Atlantic, and Fiona is forecast to become a major hurricane by Wednesday, and could deal a devastation blow to Bermuda later this week. Hurricane-force winds extend outward up to 30 miles from the center and tropical-storm-force winds extend outward up to 150 miles. A Tempest weather station at Miches, Dominican Republic recently reported a wind gust to 51 mph. The estimated minimum central pressure is 977 mb (28.85 inches).

WORLD TEMPERATURE EXTREMES: Over the last 24 hours, the highest observation outside the U.S. was 113.5F at In-Salah, Algeria. The lowest observation was -99.6F at Vostok, Antarctica.