It is another hot and humid day with temperatures surging into the low and mid 90s across Alabama this afternoon. The surface boundary to our north is slowly sinking south bringing much higher rain chances across northern portions of the state today. The SPC maintains a “marginal risk” (level 1/5) of severe thunderstorms for the northern quarter of the state this afternoon and evening as stronger storms could produce strong straight line winds. Expect pockets of heavy rainfall as well. 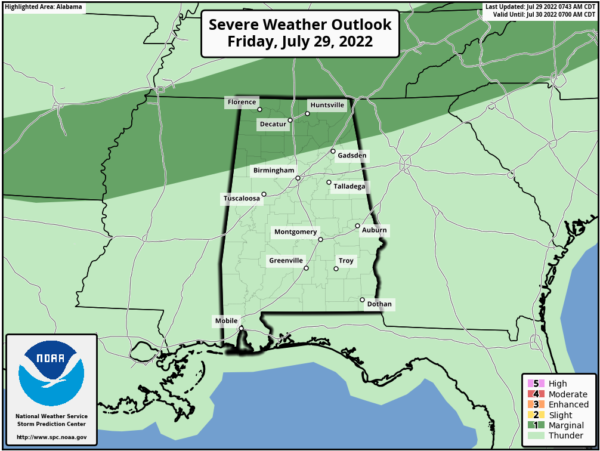 HIGHER RAIN CHANCES: For the weekend, expect occasionally cloudy conditions with numerous showers and storms both Saturday and Sunday. It will not be a “weekend washout”, but have back-up plans as you will likely be dodging rain at times. Rainfall distribution will be very uneven, we can’t promise everyone will get rain, but over the weekend, the odds are very favorable for most locations to see some rain. A few stronger storms are possible and we will have to monitor rainfall trends for areas of isolated flash flooding. Highs will be closer to 90° both days.

HELLO AUGUST: Scattered showers and storms remain in the forecast, especially for the first half of the week with highs in the upper 80s to low 90s. The second half of the week, looks to feature pretty routine early August weather with partly sunny days, fair nights, and scattered, mostly afternoon and evening showers and thunderstorms. Highs will be in the low to mid 90s.

THE TROPICS: The Atlantic Basin remains quiet with no signs of development and into next week. The next few names up are Danielle, Earl, and Fiona. The season will pick up in the coming weeks as we enter the heart of the season, late August, September, and early October.

WORLD TEMPERATURE EXTREMES: Over the last 24 hours, the highest observation outside the U.S. was 119.1F at Jahra, Kuwait. The lowest observation was -83.9F at Dome A, Antarctica.