We are seeing more sun than clouds this afternoon, but we are seeing upper-level clouds roll into the Alabama sky, giving us a filtered sunshine look, but other than that, the weather is quite pleasant for a December day in Alabama. 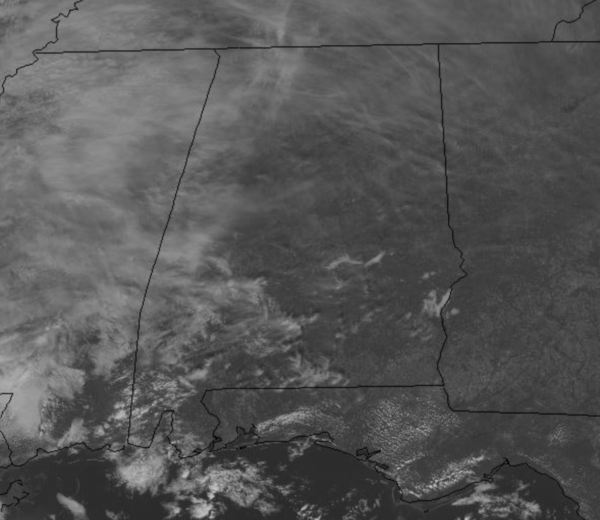 We do note, some areas of fog were still present through the late morning hours around the Alabama River, but most of it has mixed out as we as we approach the midday hours. Temperatures at midday are in the 60s and again, many of us will be flirting with those low 70s by the end of the day. 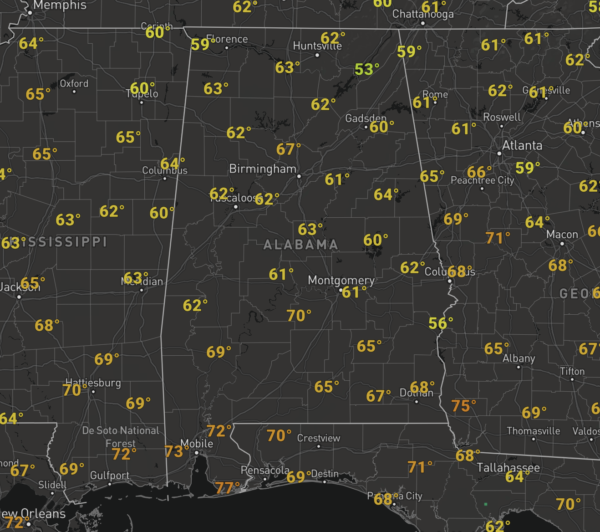 Overnight, clouds begin to increase, and showers should begin to work into the state from the west overnight ahead of an approaching cold front.

WEEKEND WEATHER: The cold front will bring a batch of showers to the state tomorrow; looks like the best chance of rain will come during the morning and early afternoon hours. With little instability present, though a rumble of thunder may be possible, there is no risk of severe storms. Rain amounts under one-half inch are expected, and therefore the day certainly won’t be a “wash-out”. The sky will be mostly cloudy and the high will be in the mid 60s. Showers could linger over South Alabama tomorrow night as the front stalls out there.

Much of Sunday looks dry for North/Central Alabama, although showers remain possible over the southern counties of the state. Then, a wave of low pressure will develop on the front, and will bring widespread rain statewide Sunday night into early Monday morning. Rain amounts of around one inch are likely; not expecting any thunder for most of the state. The high Sunday will be in the 60s.

FOOTBALL WEATHER: Alabama will take on Arkansas in Fayetteville tomorrow (11:00a CT kickoff)… the weather looks dry but cold. The sky will be cloudy with temperatures rising from 39 degrees at kickoff, into the low 40s during the second half.

UAB plays Rice in Houston tomorrow (11:00a CT kickoff)… the sky will be sunny with temperatures rising from 66 at kickoff, to near 70 by the second half.

Then, tomorrow evening, Auburn travels to Starkville to take on Mississippi State (6:30p CT kickoff). The sky will be mostly fair with temperatures falling the low 50s at kickoff, into the mid 40s by the final whistle.

WORLD TEMPERATURE EXTREMES: Over the last 24 hours, the highest observation outside the U.S. was 113.0F at Kimberley, South Africa. The lowest observation was -67.2F at Ojmjakon, Russia.

WEATHER ON THIS DATE IN 1932: Very cold weather prevailed along the West Coast. San Francisco received 0.8 inch of snow, and at the airport the temperature dipped to 20 degrees. At Sacramento CA, the mercury dipped to 17 degrees to establish an all-time record low for that location. Morning lows were below freezing from the 9th to the 15th at Sacramento, and the high on the 11th was just 34 degrees. The cold wave dealt severe damage to truck crops and orange groves in the Sacramento Valley.