DRY TODAY, RAIN RETURNS TOMORROW: It was a frosty start to the day but we are warming up into the 40s and 50s across the state this afternoon. 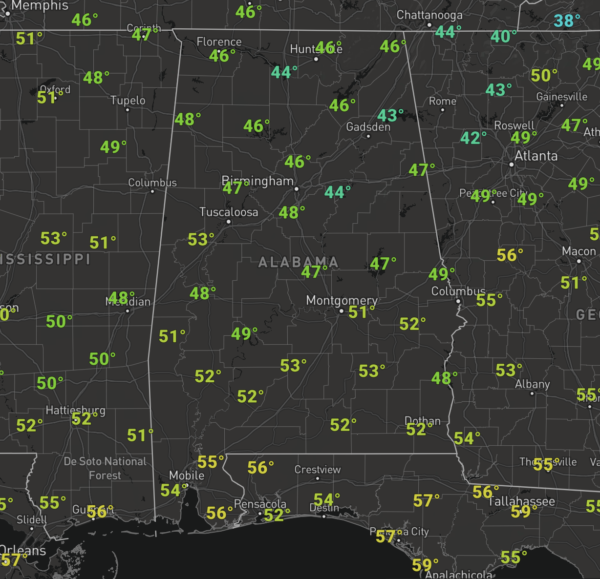 We are starting to get upper-level clouds rolling into the state, giving us the filtered sunshine look. 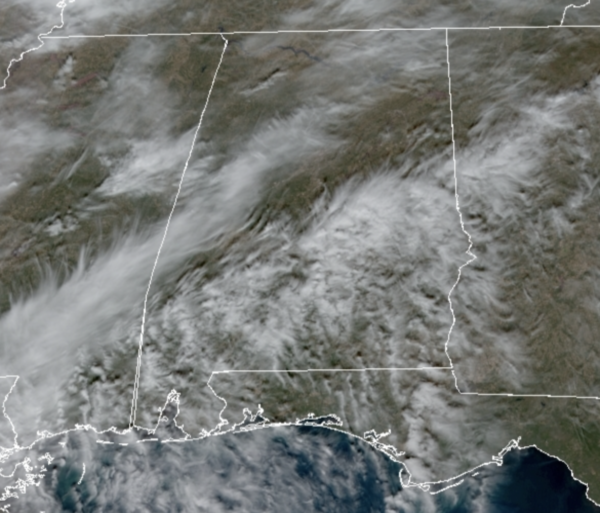 Late in the day, clouds will be on the increase and those will be keep temperatures warmer tonight with most locations around the 40 degree mark overnight. We should see rain move into West Alabama early tomorrow morning.

Tomorrow will be a cold and wet day, with brisk winds out of the east at 10-20 mph. We will see periods of rain throughout the day, a steady soaking rain for many of us with rainfall totals around 1/2 inch are expected. Highs tomorrow will most likely hold in the 40s. With the cold, stable air, there is no threat for severe weather and likely no thunder for much of the state, however, we note the SPC has defined a “marginal risk” (level 1/5) of severe storms near the Gulf Coast, for Mobile and Baldwin counties, and the Florida Panhandle. A few storms there could produce gusty winds tomorrow afternoon and evening, but the overall threat of severe storms is not especially high.

WINTRY MISCHIEF???: Tomorrow night, as the cold core upper low swings through North Alabama, there is a chance the rain could mix with, or change to snow over some of the northern counties of Alabama. The upper-level lows are notorious for over-producing as they ring the moisture out of the air, so definitely something we will need to monitor tomorrow night. For now, the best chance of seeing some snow is along and north of U.S. 278, north of a line from Hamilton to Cullman to Gadsden. Where heavier snow showers form under the upper low, the ground could become white in spots, but at the moment we are not expecting any major accumulation or meaningful impact.

FOUL FRIDAY: Friday looks to be a rather raw winter’s day….expect lingering areas of light rain to start Friday, with the sky likely staying cloudy all day and temperatures struggling to reach the 40s for many locations. Factor in northerly winds, and it will feel even colder. The sky should finally clear Friday night, allowing temperatures to fall to below freezing for many of us.

WORLD TEMPERATURE EXTREMES: Over the last 24 hours, the highest observation outside the U.S. was 105.8F at Gaya, Niger. The lowest observation was -60.3F at Verhoyanskij Perevoz, Russia.

WEATHER ON THIS DATE IN 1989: A “bonafide blizzard” ripped through south central and southeastern Idaho. Strong winds, gusting to 60 mph at the Fort Hall Indian Reservation, whipped the snow into drifts five feet high, and produced wind chill readings as cold as 35 degrees below zero. The blizzard prompted an Idaho Falls air controller to remark that “the snow is blowing so hard you can’t see the fog”.