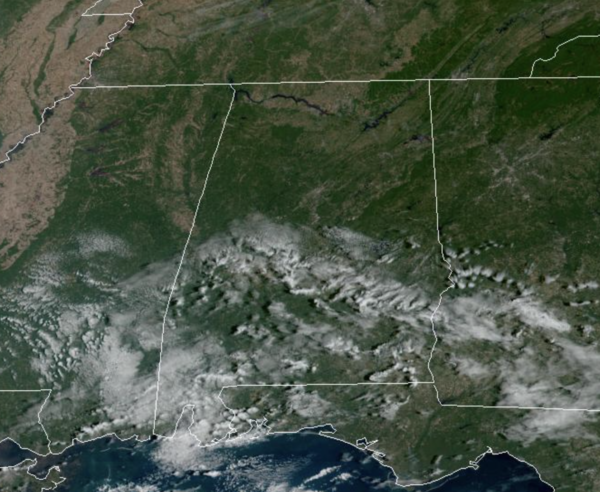 DRY, MILD DAYS: The daily forecast through Friday continues to feature mainly sunny, mild days and clear, cool nights. Highs will be in the upper 70s to lower 80s, while nights will be in the 50s. Great weather for early October in Alabama and this dry pattern will likely persist another 10-14 days.

FRIDAY FRONTS: On Friday, a couple of cold fronts will pass through the state, but with little moisture to work with, there will be some clouds, but no rain. These front will deliver much cooler air for the upcoming weekend. The cooler air arrives Saturday as the high drops into the low 70s with a brisk north wind at times. Sunday morning will be our coolest morning so far this season with lows well down in the 40s…and cooler spots could visit the 30s. Sunday will be sunny and gorgeous with highs staying in the 70s.

FOOTBALL WEATHER: Another delightful evening for high school football games across the state Friday night; the sky will be clear with temperatures falling through the 60s.

Auburn travels to Athens Saturday to take on the Georgia bulldogs (2:30p CT kickoff)… the sky will be sunny; about 77° at kickoff, falling into the low 70s by the final whistle.

UAB has a home game in downtown Birmingham Saturday at Protective Stadium against Middle Tennessee (also a 2:30p CT kickoff)… it will be sunny afternoon with temperatures falling from around 75° at kickoff to near 70 by the final whistle.

Then, Saturday night Alabama hosts Texas A&M (7p CT kickoff) at Bryant-Denny Stadium in Tuscaloosa; the sky will be clear with temperatures falling from 65° at kickoff into the 50s by the fourth quarter. A perfect night for football

TROPICAL DEPRESSION TWELVE: At 1100 AM AST, the center of Tropical Depression Twelve was located near latitude 15.6 North, longitude 32.0 West. The depression is moving toward the west-northwest near 9 mph and this motion is expected to continue through Thursday. Maximum sustained winds are near 35 mph with higher gusts. Slow weakening is forecast, and the depression is expected to become a remnant low by Thursday. The estimated minimum central pressure is 1007 mb (29.74 inches). 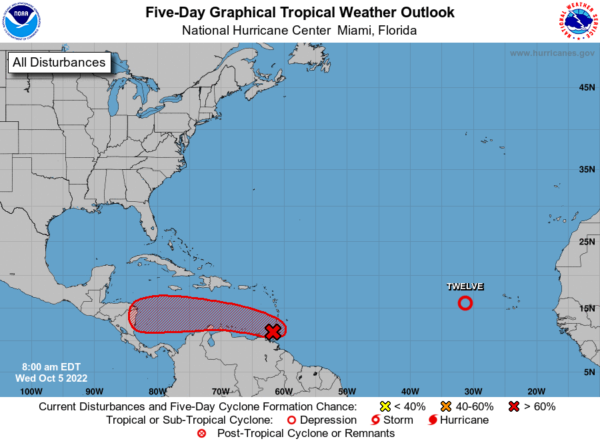 Also, a broad area of low pressure located near the southern Windward Islands continues to produce a large area of disorganized showers and thunderstorms. Radar imagery from Barbados and surface observations indicate that the system has not become any better organized since yesterday. However, upper-level winds are forecast to become more conducive for development, and a tropical depression is likely to form over the next several days if the system remains over water while moving generally westward at about 15 mph over the southeastern and southern Caribbean Sea. An Air Force reconnaissance mission is currently en route to investigate the system this morning.

Regardless of development, heavy rainfall with localized flooding, as well as gusty winds to gale force, are expected over portions of the Windward Islands, northern portions of South America, and the ABC Islands during the next couple of days. Interests in those locations, in addition to those in Central America, should continue to monitor the progress of this system. Formation chance through 5 days…high…80 percent.

NEXT WEEK: No real change in the pattern with sunny pleasant days and clear cool nights. No signs of rain through at least next Friday for Alabama. Highs next week in the 70s, lows in the 50s.

WORLD TEMPERATURE EXTREMES: Over the last 24 hours, the highest observation outside the U.S. was 122.5F at Macapa, Brazil. The lowest observation was -87.2F at Dome A, Antarctica.