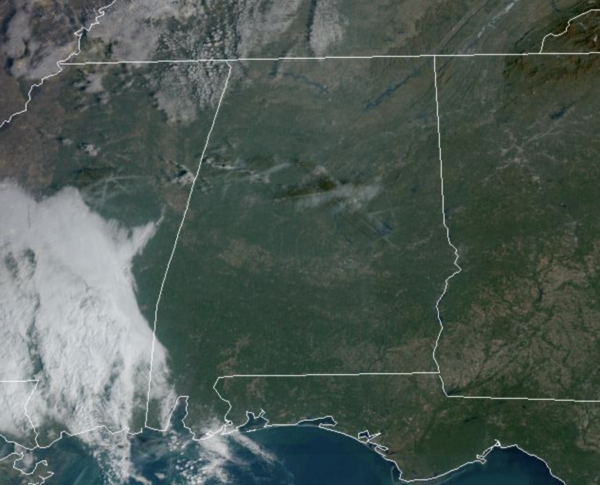 Plenty of sunshine today and above average temperatures continue for our Friday afternoon across Alabama with many locations around 80°. To our west, we are watching a major severe threat for severe storms across the Arklatex, and though that system is due in here tomorrow, it will be weakening and will not be a major issue for us. 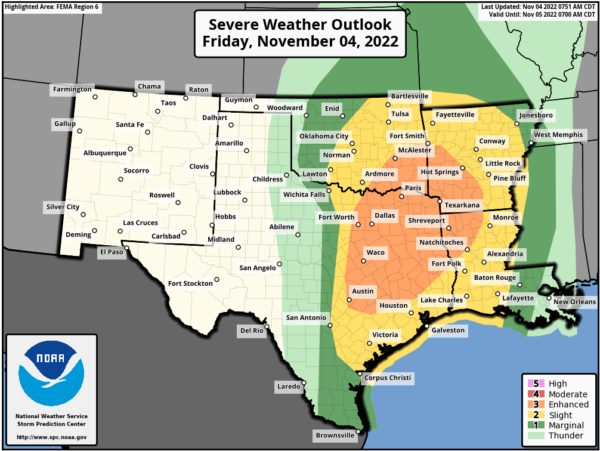 FRIDAY NIGHT LIGHTS: The sky will be fair tonight for the high school playoff games; temperatures will fall from the low 70s at kickoff, into the upper 60s by the final whistle.

THE ALABAMA WEEKEND: A band of weakening showers will push into Northwest Alabama tomorrow morning, making slow progress across the state during the midday hours. A thunderstorm is possible tomorrow afternoon over the southwest corner of the state, where SPC has introduced a “marginal risk” (level 1/5) of severe storms around Mobile. 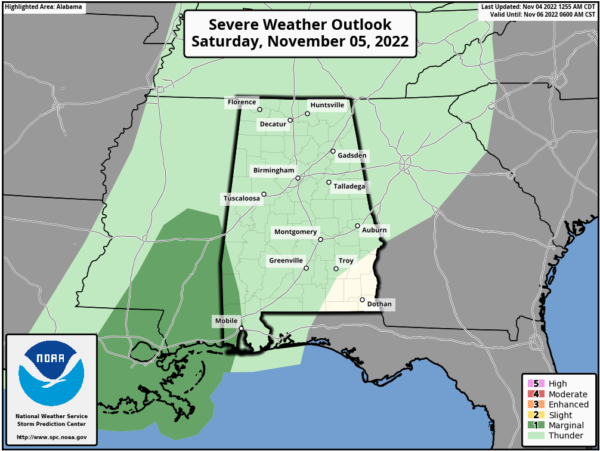 Gusty winds are possible with heavier storms, but this is a very low end threat. Showers will fade late tomorrow across the state; amounts of 1/4 to 1/2 inch are possible over Northwest Alabama, but the eastern counties of the state will see only very light and spotty rain. No “all day” rain and not a “washout”, but if you have something planned outdoors tomorrow have the rain gear handy. The sky will be mostly cloudy with a high in the mid 70s. Sunday, a few widely scattered showers are possible, but much of the day will be dry with a mix of sun and clouds. The high Sunday afternoon will be in the in the upper 70s.

FOOTBALL FORECAST: UAB will host UTSA tomorrow at Protective Stadium in downtown Birmingham (2:30p CT kickoff)… the sky will be cloudy with a chance of a few showers during the game. Temperatures will be in the mid 70s.

And, Alabama will be in Baton Rouge to play LSU in “Death Valley” (6:00p CT kickoff)… the sky will be cloudy with temperatures will be close to 70 degrees during the game. No rain is expected. We note that is rain is likely in both Starkville and Baton Rouge during the day tomorrow the games. Not raining all day, but occasional rain with potential for some thunder.

FALL BACK: Don’t forget time changes this weekend as we fall back onto standard time tomorrow night. That will give us an extra hour of sleep tomorrow night, but also mean sunset Sunday in Birmingham will be 4:50 PM CST.

NEXT WEEK: The week starts off very warm with lows 80s under a partly sunny sky. Temperatures slowly trend downward for the rest of the week, with highs back in the 70s Wednesday through Friday. For now much of the week looks dry, but we will keep an eye on a broad area of low pressure that is expected to be over the Florida Peninsula, which could push moisture into the eastern counties by Friday. This would be associated with some possible late season tropical mischief. 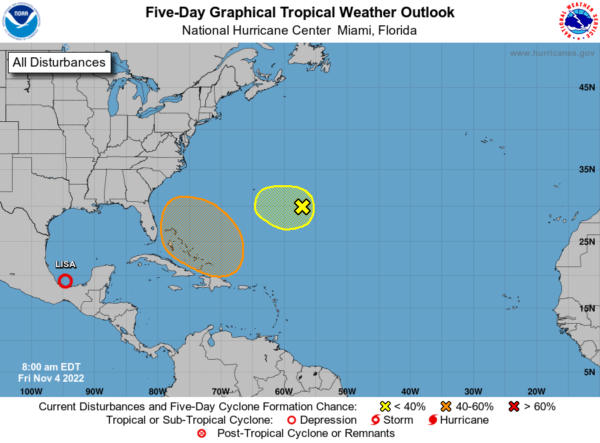 TROPICS: Lisa continues to dissipate over the Bay of Campeche and Martin is no more. Two other areas the NHC is monitor, one near Bermuda has a very low chance of development. However, a large non-tropical low pressure system is expected to develop across the northeastern Caribbean Sea and southwestern Atlantic during the next day or two. The system is initially expected be very broad and disorganized, but it could begin to acquire subtropical or tropical characteristics by the end of the weekend. Environmental conditions could support additional gradual development early next week and a subtropical or tropical depression could form while the disturbance moves generally northwestward or westward over the southwestern Atlantic. Formation chance through 5 days…medium…40 percent. If this develops, the next name is Nicole.

WORLD TEMPERATURE EXTREMES: Over the last 24 hours, the highest observation outside the U.S. was 109.0F at Ondangwa, Namibia. The lowest observation was -67.7F at Vostok, Antarctica.