The cold front is stalled across South Alabama as we head into the afternoon hours. Along and south of the front, rain and a few strong storms will remain a threat today across South Alabama and the SPC maintains a “marginal risk” (level 1/5) of severe thunderstorms down that way as some of the heavier storms later today could produce gusty winds and some hail. 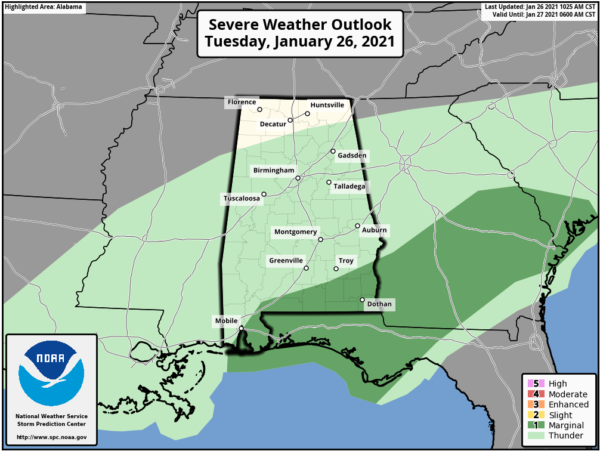 North of the front, we are dry and seeing more sun than clouds with temperatures in the 60s.

RAIN RETURNS TONIGHT: A wave of low pressure develops along the front, and that will cause moisture to spread back north with increasing clouds this afternoon and evening with rain returning statewide tonight and into a part of the day tomorrow, The air will be stable so there is no risk of severe storms, and rain amounts should be around 1/2 inch. The rain will end tomorrow from northwest to southeast as drier and colder air drops into the state. Temperatures will likely fall into the 40s over North Alabama by afternoon with a brisk north wind, making it feel evening colder. The sky will clear tomorrow night and temperatures should fall to near 30° by Thursday morning.

SUNNY END TO WORK WEEK: With high pressure firmly in control of our weather, both Thursday and Friday will feature tons of sunshine, but chilly temperatures. Highs Thursday will struggle to climb out of the 40s for many locations, while Friday highs should return to the mid 50s. Friday morning will be the coldest as we start the day in the mid 20s across much of North/Central Alabama.

WORLD TEMPERATURE EXTREMES: Over the last 24 hours, the highest observation outside the U.S. was 108.9F at Augrabies Falls, South Africa. The lowest observation was -68.8F at Verhojansk, Russia.

WEATHER ON THIS DATE IN 1978: A paralyzing blizzard struck the Midwest. One to three feet of snow fell in Michigan, and 20 to 40 inches was reported across Indiana. Winds reached 70 mph in Michigan, and gusted above 100 mph in Ohio. The high winds produced snow drifts twenty feet high in Michigan and Indiana stranding thousands on the interstate highways. Temperatures in Ohio dropped from the 40s to near zero during the storm.