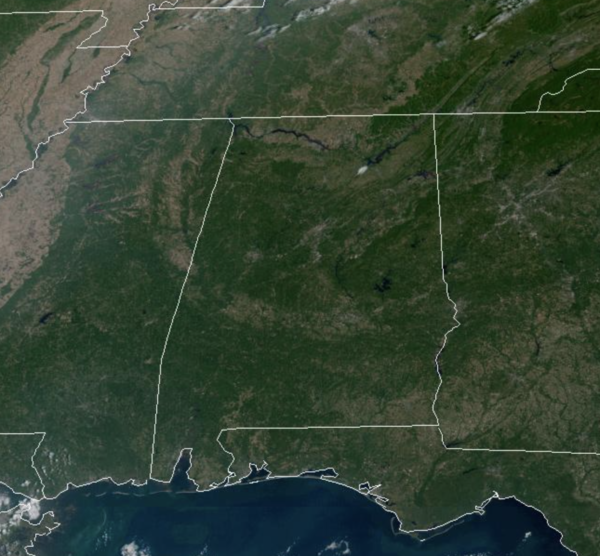 ANOTHER BEAUTIFUL DAY: Tons of sunshine again today and expect more of the same tomorrow with mild temperatures; upper 70s to lower 80s, and clear and cool nights with 40s and 50s.

DROUGHT MONITOR: The recent dry spell is starting to take its toll on the state as the Abnormally Dry and Moderate Drought conditions are increasing fast across Alabama. With no signs of rain in the forecast the next 8-10 days, expect drought conditions to continue to spread and increase in coverage over the next week or two. 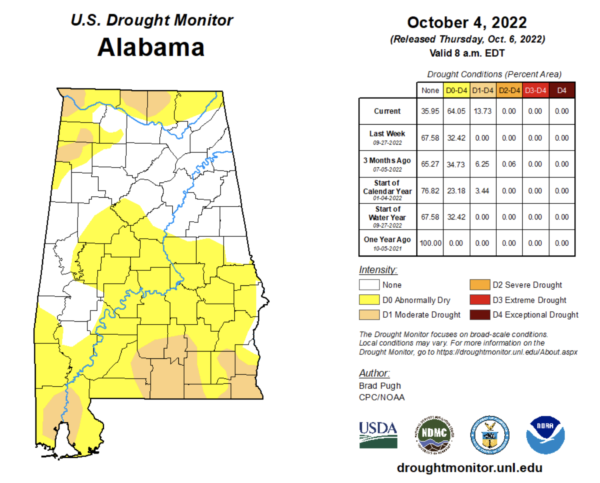 Compare this week’s to last week’s monitor, and we can really see the difference in just a week. 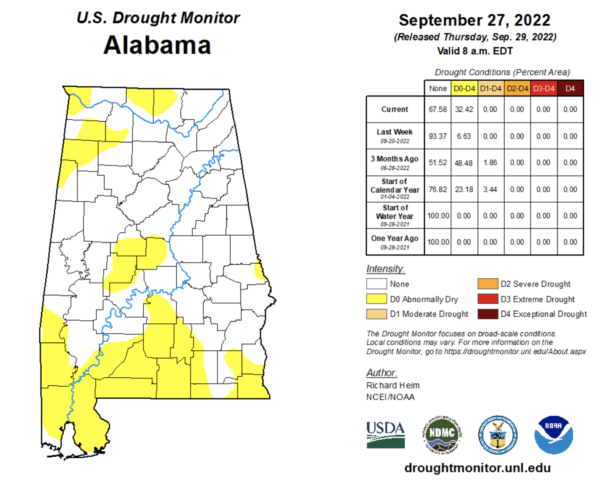 FRIDAY FRONT: Tomorrow, a couple of cold fronts will pass through the state, but with little moisture to work with, there will be some clouds, but no rain. These front will deliver much cooler air for the upcoming weekend. The cooler air arrives Saturday as the high drops into the low 70s with a brisk north wind at times. Sunday morning will be our coolest morning so far this season with lows well down in the 40s…and cooler spots could visit the 30s. Sunday will be sunny and gorgeous with highs staying in the 70s.

FOOTBALL WEATHER: Another delightful evening for high school football games across the state Friday night; the sky will be clear with temperatures falling through the 60s.

Auburn travels to Athens Saturday to take on the Georgia bulldogs (2:30p CT kickoff)… the sky will be sunny; about 75° at kickoff, falling to near 70° by the final whistle.

UAB has a home game in downtown Birmingham Saturday at Protective Stadium against Middle Tennessee (also a 2:30p CT kickoff)… it will be sunny afternoon with temperatures falling from around 73° at kickoff into the upper 60s by the final whistle.

Then, Saturday night Alabama hosts Texas A&M (7p CT kickoff) at Bryant-Denny Stadium in Tuscaloosa; the sky will be clear with temperatures falling from 65° at kickoff into the 50s by the fourth quarter. A perfect night for football

TROPICAL DEPRESSION TWELVE: The center of Tropical Depression Twelve was located near latitude 18.0 North, longitude 33.4 West. The depression is moving toward the west-northwest near 13 mph and this motion is expected to continue for the next day or so. Maximum sustained winds are near 35 mph with higher gusts. Slow weakening is forecast, and the depression is expected to become a remnant low within the next day. The estimated minimum central pressure is 1007 mb (29.74 inches). 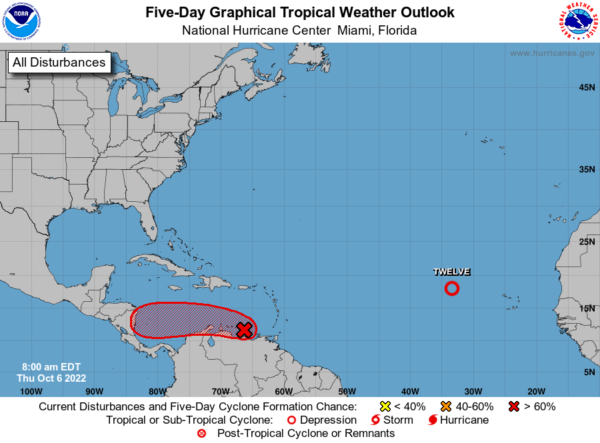 Also, the NHC has started issuing advisories on Potential Tropical Cyclone 13 which is the broad and elongated area of low pressure located over the far southeastern Caribbean Sea just off the coast of Venezuela. It continues to produce an expansive area of showers and thunderstorms over the southern Windward Islands, northern South America, and adjacent waters. While land interaction with the northern coast of South America may hinder significant development during the next day or so, environmental conditions are expected to be mostly conducive for development while the system moves westward at about 15 mph, and a tropical depression is likely to form in the next day or two by the time it enters the south-central Caribbean Sea. Additional strengthening is anticipated while the system moves westward over the southwestern Caribbean Sea toward Central America late Friday through Sunday.

Regardless of development, heavy rainfall with localized flooding, as well as gusty winds to gale force, are expected over portions of the Windward Islands, northern portions of Venezuela including Isla Margarita, the ABC Islands, and the Guajira Peninsula of Colombia during the next day or two. Interests in those locations, in addition to those in Central America, should continue to monitor the progress of this system. Formation chance through 5 days…high…90 percent.

NEXT WEEK: No real change in the pattern with sunny pleasant days and clear cool nights. No signs of rain through at least next Friday for Alabama. Highs next week will be in the 70s and 80s, while lows will be in the 50s.

WORLD TEMPERATURE EXTREMES: Over the last 24 hours, the highest observation outside the U.S. was 111.6F at Ondangwa, Namibia. The lowest observation was -84.6F at Dome A, Antarctica.