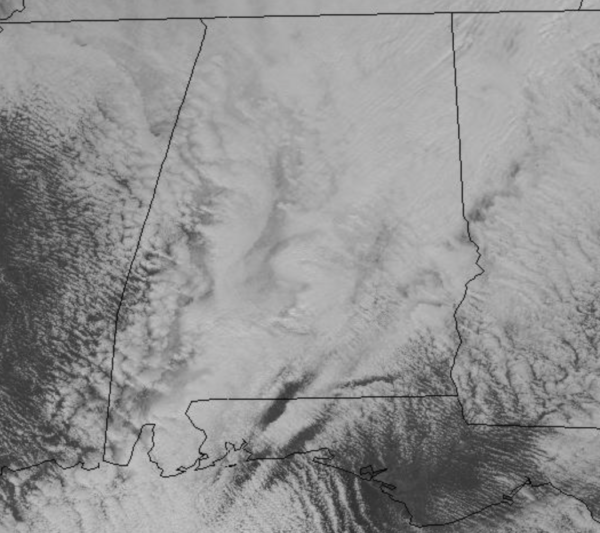 Temperatures have been falling all morning long and many locations are heading into the 30s at midday. Add in those blustery north winds, and it feels even colder across the state today. A deep upper trough is swinging across the state today, and it continues to produce clouds and areas of light rain, with even some snow flurries and snow showers at times this afternoon. 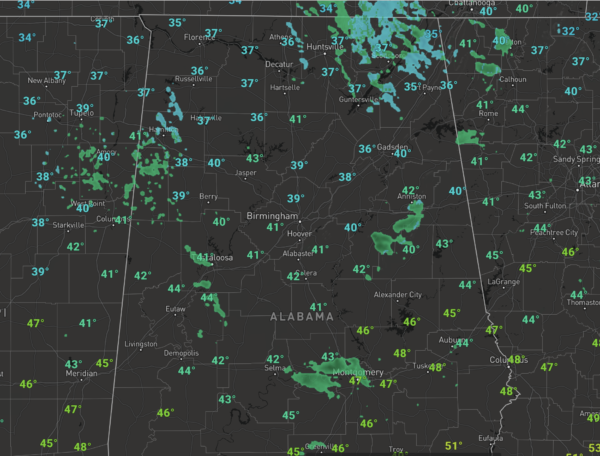 Even a few moderate snow showers are ongoing over North Alabama this afternoon, but for now we expect no significant impact or accumulation due to warm ground temperatures. However, there is a chance, of a “dusting” on grassy areas across the higher terrain of Northeast Alabama where heavier snow showers develop. Also, the mountains of East Tennessee look to have significant accumulations the next 24-48 hours from this system.

TONIGHT: The sky will gradually clear late tonight, and by daybreak tomorrow we project lows down in the lower and mid 20s for all of North/Central Alabama, with a freeze all the way down to the Gulf Coast. In fact, freeze warnings are in effect for South Alabama and the Florida Panhandle overnight tonight.

REST OF THE WEEK: Tomorrow and Wednesday will both be sunny, tomorrow remains quite cold for the first day of December with highs in the 40s, but 50s return Wednesday afternoon. Clouds move back in Wednesday night, and we will mention a chance of some light rain Thursday and Friday with a passing disturbance. Moisture levels will remain low so the rain should be scattered in nature with amounts less than half an inch expected. With the clouds and showers, temperatures will only be in lower 50s Thursday. The rain should exit the area early on Friday, and the sky should become partly sunny Friday with highs in the mid 50s for most North/Central Alabama locations. .

IN THE TROPICS: Today is officially the last day of hurricane season, and what a season it has been. More named storms than ever occurred this year, with the most U.S. landfalls on record as well. For the most part, we are done with the season, but still the NHC is monitoring one area of concern in the eastern Atlantic. 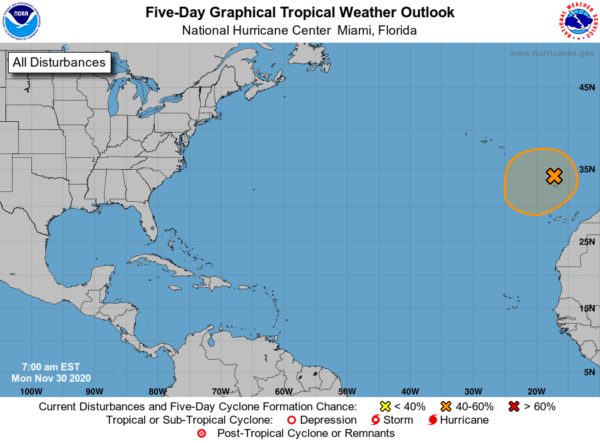 A large non-tropical low pressure system centered just north of the Madeira Islands is continuing to produce disorganized showers and thunderstorms. This low is expected to meander over the next day or so and could acquire subtropical characteristics during that time. Afterwards, environmental conditions are forecast to become unfavorable for further development. Regardless of subtropical formation, this system will continue to produce strong winds and locally heavy rains in the Madeira Islands through Tuesday. Formation chance through 5 days…medium…40 percent.

WORLD TEMPERATURE EXTREMES: Over the last 24 hours, the highest observation outside the U.S. was 115.7F at Birdsville Airport, Australia. The lowest observation was -50.3F at Iema, Russia.

WEATHER ON THIS DATE IN 1875: A severe early season cold wave set November records in the northeastern U.S. The temperature dipped to 5 above zero at New York City, 2 below at Boston MA, and 13 below at Eastport ME.