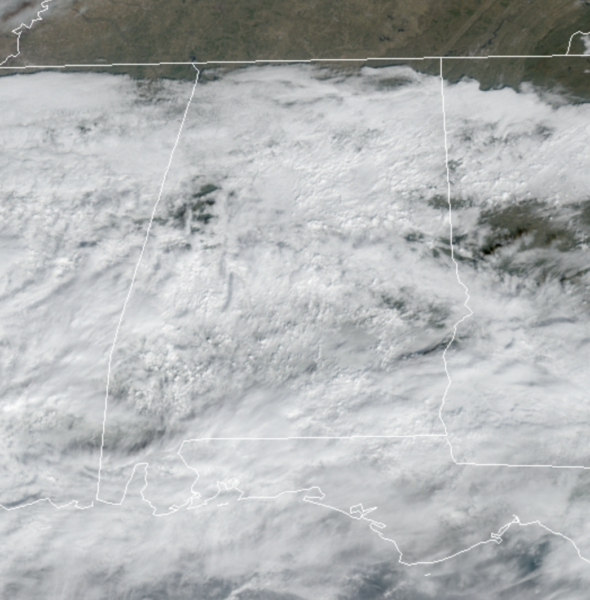 The cold front has become stationary over South Alabama, and is keeping the state cloudy and much colder today compared to yesterday. Late this morning, temperatures are in the lower 40s, but should wind up in the upper 40s and lower 50s across the area today. 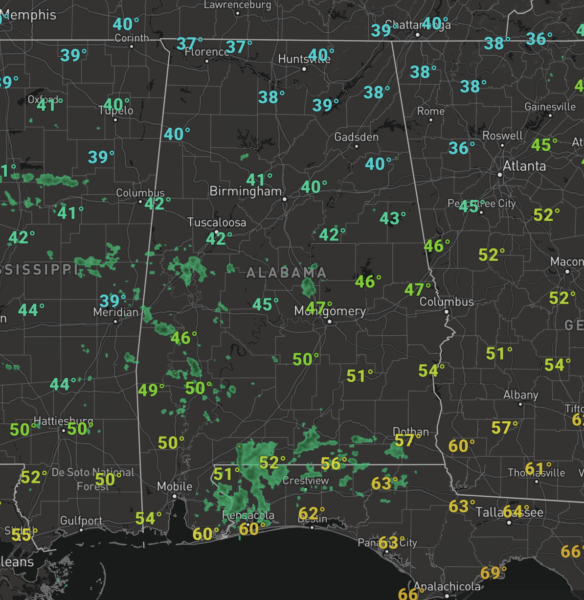 Most of North/Central Alabama is dry, but there are some areas of light rain, but most of this should stay over the southern half of the state.

TONIGHT: Rain overspreads the state late tonight as a wave of low pressure develops and moves along the front. It will be a chilly night with lows in the 40s. Tomorrow should start off we, but the rain should end by late morning and we should see sunshine return through the afternoon hours. Tomorrow will be warmer as highs return to the upper 50s and lower 60s.

WARMER TO END WEEK: The front moves back north late this week as a warm front and temperatures reach the upper 60s and lower 70s on Thursday. Friday will be warm with highs in the mid and upper 70s. Both days will feature more clouds than sun, and the chance for some scattered showers at just about anytime, some storms may be possible Friday night as well.

STORMY SATURDAY: Our next cold front will head towards Alabama on Saturday, bringing widespread rain, which could be heavy at times, and storms back to Alabama Saturday and Saturday night. The air will be unstable, as temperatures are likely to be in the 70s, so we should see some strong storms, but the overall severe weather threat still looks low as the main dynamics will be well north of Alabama and the upper trough remains positively tilted.

For now the SPC has no areas of Alabama or the Southeast defined in a severe weather threat for this weekend, but of course that can change later this week. By the time we get to Saturday, I would not be surprised to see at least a marginal risk for portions of Alabama. Of course we continue to watch model trends the next several days and will have a better handle on overall impacts and timing as we get closer to the weekend.

WORLD TEMPERATURE EXTREMES: Over the last 24 hours, the highest observation outside the U.S. was 109.0F at Marble Bar, Australia. The lowest observation was -73.8F at Delyankir, Russia.