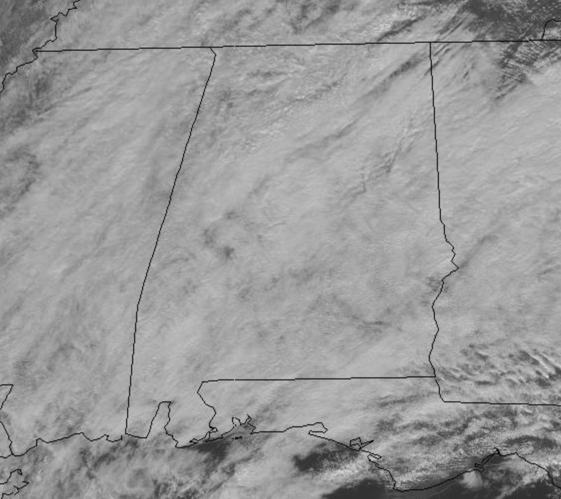 Another cloudy and gray day across the state, with temperatures well above average once again as lower to upper 70s are widespread rolling into the afternoon hours. Moisture levels continue rise, and therefore the clouds, and some light spotty showers are showing up across the Alabama landscape. Nothing too heavy or widespread, but you may certainly have to use your windshield wipers a time or two the rest of today and tonight. A cold front will be approaching the state by tomorrow, and we are expecting widespread showers with embedded storms through the day tomorrow as the front moves through the state, but no severe storms are expected. Rain amounts will be generally in the 1/2 inch range for much of North/Central Alabama. Drier air will move into the northern half of the state behind the front Wednesday night.

THURSDAY/FRIDAY: Not much change in the forecast for these two days are we should see more sun than clouds, lower humidity, and somewhat cooler temps. Highs will remain in the 70s, but nights will be a bit more refreshing with temps in the upper 40s and low 50s.

ETA UNCERTAINTY: Eta remains in the Southern Gulf of Mexico this afternoon, nearly stationary, and little motion is expected through this afternoon. A slow northward motion is forecast to begin by this evening and continue through Thursday. 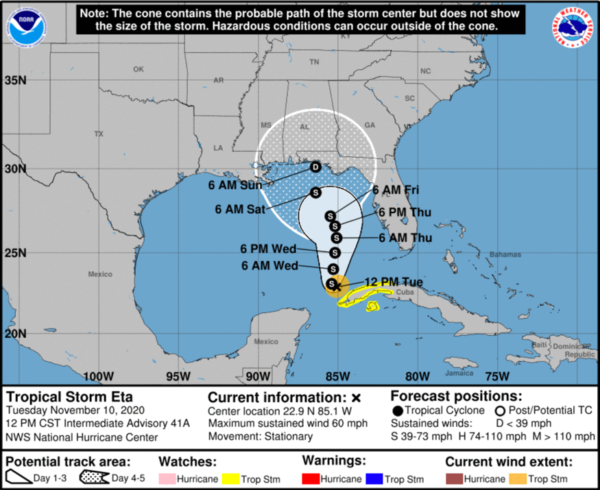 Maximum sustained winds are near 60 mph with higher gusts. Some strengthening is forecast during the next day or two, followed by weakening likely starting on Thursday. Tropical-storm-force winds extend outward up to 60 miles from the center. The estimated minimum central pressure is 992 mb (29.30 inches).

Steering currents have all but collapsed with this system, so there is pure model madness on the where the system ends up…The latest track just out from the NHC has the system slowly drifting north through the Central Gulf the rest of this week, with landfall along the Florida Panhandle, somewhere around Destin or Ft. Walton Beach, as a weakening Tropical Storm or Tropical Depression. If this forecast continues, this would certainly cause impacts in Alabama, but mainly rain, and little to no wind.

Again, this will likely change in the coming days and it continues to be way too early to know if this even occurs. Stay tuned for updates throughout the week.

ELSEWHERE IN THE TROPICS: THETA: Subtropical Storm Theta formed last night in the middle of the Atlantic and will not impact the U.S. and will be our favorite kind of storm, a fish storm, only impacting the fish. It is moving east at 15 mph and has winds of 70 mph. 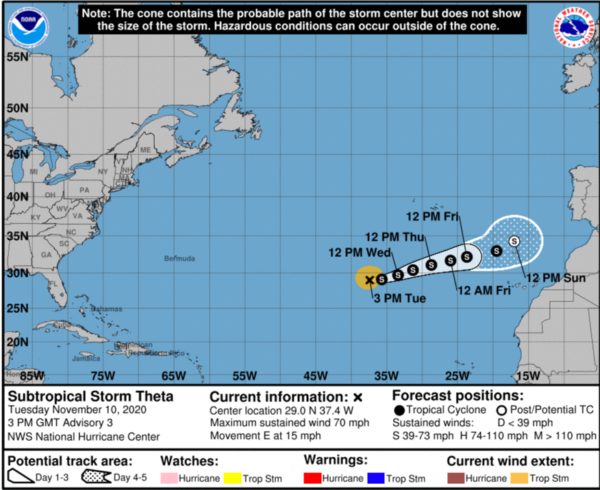 IOTA IS THAT YOU?: A tropical wave located over the eastern Caribbean Sea is producing disorganized showers and thunderstorms. The wave is expected to move westward into more conducive environmental conditions over the next several days, and a tropical depression is likely to form late this week or this weekend when the wave reaches the central or western Caribbean Sea. Formation chance through 5 days…high…70 percent. 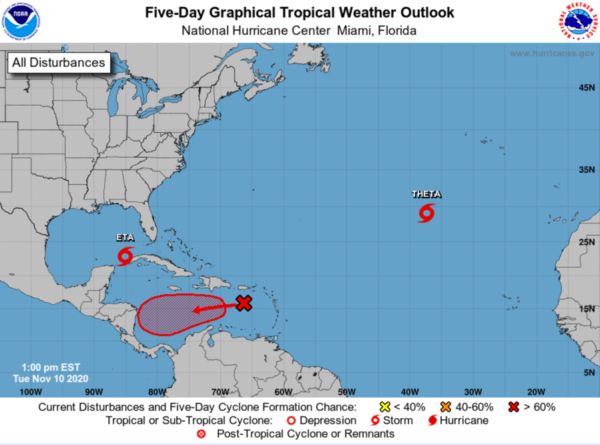 WORLD TEMPERATURE EXTREMES: Over the last 24 hours, the highest observation outside the U.S. was 111.6F at Tete, Mozambique. The lowest observation was -63.6F at Dome A, Antarctica.

WEATHER ON THIS DATE IN 1915: An unusually late season tornado struck the central Kansas town of Great Bend killing eleven persons along its 35 mile track. The tornado destroyed 160 homes in Great Bend killing 11 persons and causing a million dollars damage. Hundreds of dead ducks dropped from the sky northeast of the track’s end.