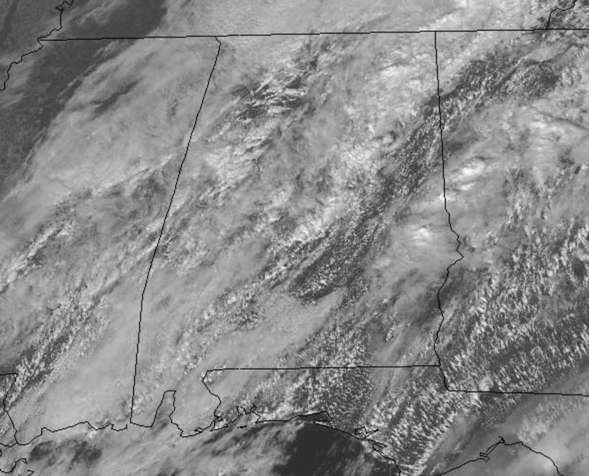 A cold front is pushing through the state today, and we continue to see widespread showers with embedded storms across the Alabama landscape as we roll into and through the afternoon hours, but again, no threat of severe storms. 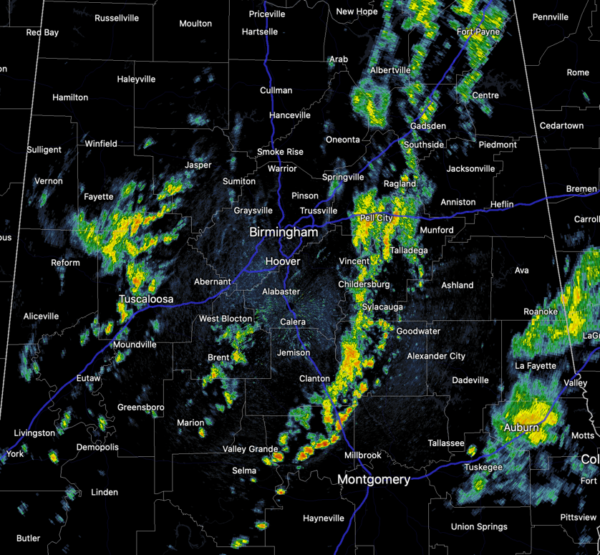 Rain amounts the rest of today will be generally in the 1/2 inch range for much of Alabama. Drier air will move into the northern half of the state behind the front late tonight.

THURSDAY/FRIDAY: Tomorrow will feature morning clouds, but the sky should clear by the afternoon. Expect lower humidity, and somewhat cooler temps. Highs will remain in the 70s, but nights will be a bit more refreshing with temps back in the 50s.

ETA HEADING TOWARDS FLORIDA PENINSULA: Finally we have model consistency to know Eta will not be an issue for Alabama. Eta become a hurricane again this morning, but the new update has they system back down to a tropical storm, with winds of 70 mph. Eta is moving toward the north-northeast near 10 mph, and this general motion is expected to continue through Thursday. On the forecast track, the center of Eta will move closer to but just offshore of the coast of west-central coast of Florida today and tonight, and move inland over the northern portion of the Florida peninsula on Thursday. Eta is expected to move northeastward into the western Atlantic late Thursday or early Friday. 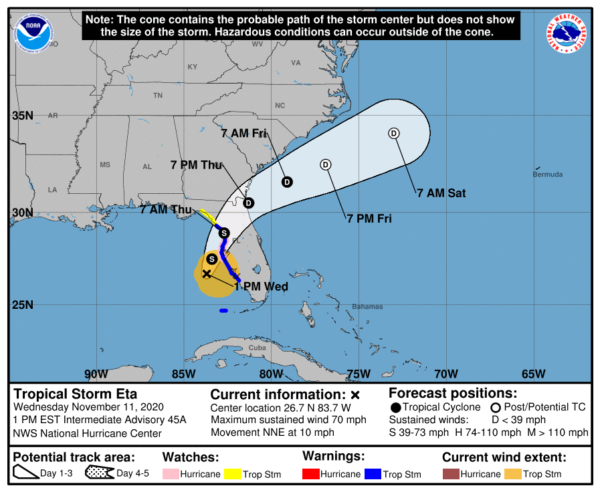 Data from the aircraft and NOAA Doppler weather radars indicate that maximum sustained winds have decreased to near 70 mph with higher gusts. Slow weakening is expected as Eta approaches the west coast of Florida tonight, followed by rapid weakening after landfall occurs on Thursday. Tropical-storm-force winds extend outward up to 115 miles, mainly northeast through southeast of the center. A wind gust to 40mph was recently reported in Venice Beach, Florida, while a gust to 45 mph was reported by a buoy just offshore Venice Beach. The minimum central pressure recently measured by the reconnaissance aircraft was 990 mb (29.23 inches).

ELSEWHERE IN THE TROPICS: Theta continue to move across the middle and eastern Atlantic and will not impact the U.S. It is our favorite kind of storm, a fish storm, only impacting the fish. It is moving east at 10 mph and has winds of 60 mph. 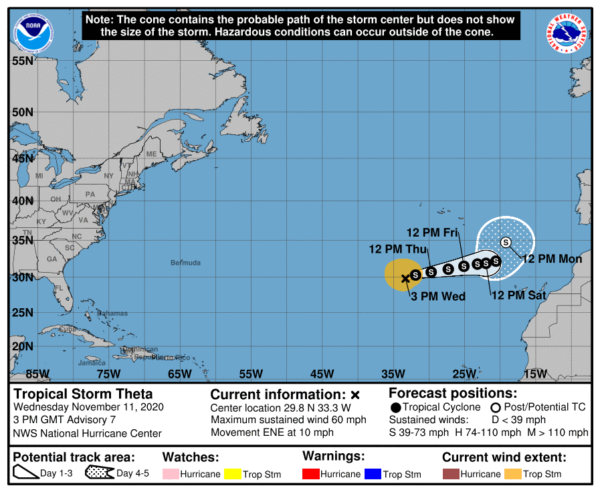 WAITING ON IOTA: A tropical wave located over the east-central Caribbean Sea is producing a large area of disorganized showers and thunderstorms. The wave is expected to move slowly westward into more conducive environmental conditions over the next several days, and a tropical depression is likely to form late this week or this weekend when the disturbance reaches the central or western Caribbean Sea. Regardless of development, this system is expected to bring heavy rainfall along with possible flash flooding to the Virgin Islands, Puerto Rico, and portions of Hispaniola over the next day or so. Formation chance through 5 days…high…80 percent.

WORLD TEMPERATURE EXTREMES: Over the last 24 hours, the highest observation outside the U.S. was 120.2F at Maun, Botswana. The lowest observation was -62.1F at Dome A, Antarctica.

WEATHER ON THIS DATE IN 1911: The central U.S. experienced perhaps its most dramatic cold wave of record. During the early morning temperatures across the Central Plains ranged from 68 degrees at Kansas City to 4 above North Platte NE. In Kansas City, the temperature warmed to a record 76 degrees by late morning before the arctic front moved in from the northwest. Skies become overcast, winds shifted to the northwest, and the mercury began to plummet. By early afternoon it was cold enough to snow, and by midnight the temperature had dipped to a record cold reading of 11 degrees above zero. Oklahoma City also established a record high of 83 degrees and record low of 17 degrees that same day. In southeastern Kansas, the temperature at Independence plunged from 83 degrees to 33 degrees in just one hour. The arctic cold front produced severe thunderstorms and tornadoes in the Mississippi Valley, and a blizzard in the Ohio Valley.