BIG CHANGES THE NEXT 24 HOURS: Another decent day of weather for Alabama with temperatures surging into the 60s this afternoon, enjoy those temps, because they will fall like a rock the next 24 hours. 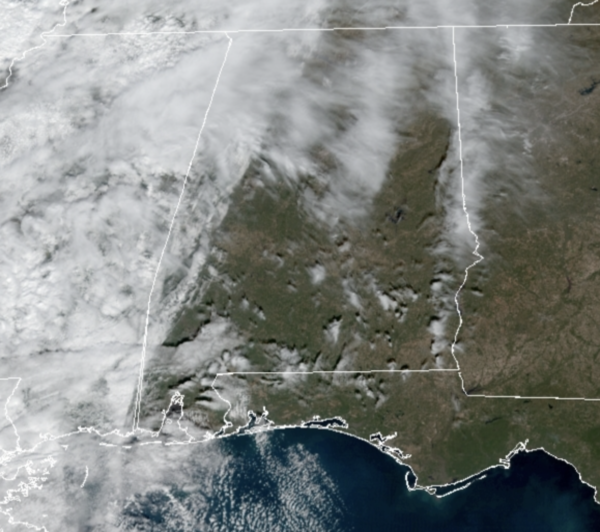 Clouds are increasing today and rain will arrive later this evening and overnight ahead of a strong cold front pushing across the Southeast. To the west of Alabama, the “marginal risk” has been reintroduced along the Mississippi River to the north of Memphis for this afternoon, but for now, much of Alabama is not included. 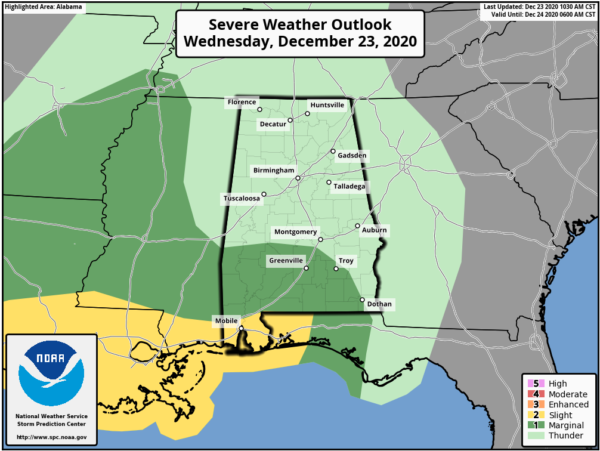 TONIGHT: A wet and windy night is in store for Alabama with the front moving into and through the state. A widespread soaking rain is expected with many locations receiving around an inch of rain before tomorrow morning. Along with the rain, expect very strong gradient winds (not related to rain or storms), these could gust as high as 35 mph during the night. As far as severe weather, the SPC has removed the threat for much of the state, but the SPC has parts of South and Southwest Alabama in a low end “marginal risk” (level 1/5) of severe thunderstorms late tonight, with the coastal counties in the level 2/5 “slight risk”. A few storms there could produce strong gusty winds, and there is an outside chance of an isolated, brief tornado (the southwest corner of the state).

ARCTIC BLAST: Once the front passes your location, temperatures will only fall through the day tomorrow. Highs for Christmas Eve will actually come at midnight tonight. By daybreak tomorrow, much of North/Central Alabama will have already fallen into the 40s, and those temps will continue to fall into the 30s by the afternoon. Add in those blustery northwest winds of 15-35 mph, and it will feel much colder. As the cold air spills into the state, some light sleet, snow flurries, and snow showers will be possible over the northern half of the state, but we are not expecting any meaningful accumulations or impacts. The ground could become white on grassy areas across higher terrain of Northeast Alabama, but icy travel is not expected with temperatures above freezing and warm soil temperatures. Sure there will be some excitement with the flurries flying around, but the main story will be the frigid air as the sky will clear tomorrow night, and by daybreak Friday we project temperatures in the 15-25 degree range over North/Central Alabama, again, with breezy conditions lingering, wind chills on Christmas morning, will be well down in the teens or lower, but the roads will be dry, so no travel impacts are expected. For Christmas Day, expect a day full of sunshine, but it will remain cold with highs only in the upper 30s for most locations.

WORLD TEMPERATURE EXTREMES: Over the last 24 hours, the highest observation outside the U.S. was 120.9F at Ndzevane, Swaziland. The lowest observation was -63.0F at Verhojansk, Russia.

WEATHER ON THIS DATE IN 1982: A major winter storm struck Colorado producing heavy snow and blizzard conditions. A record two feet of snow was reported at Stapleton Airport in Denver, which was shut down for 33 hours. Up to 44 inches of snow fell in the foothills surrounding Denver. The storm hurt the ski industry as skiers were unable to make it out of Denver to the slopes, and the closed airport became a campground for vacationers.