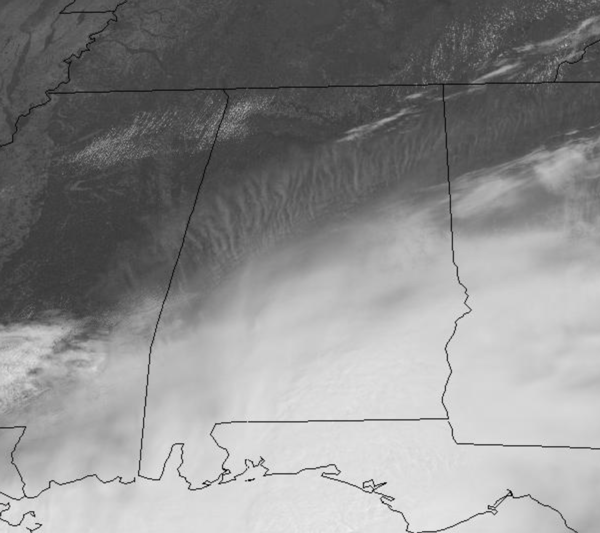 The sky is becoming partly to mostly sunny this afternoon as drier air works into the state, and overall it is a pretty nice afternoon across North/Central Alabama with temperatures in the upper 60s and low 70s. Tonight will be a cool one with lows in the upper 40s and lower 50s, and clouds will begin to increase overnight across Alabama.

FRIDAY & THE WEEKEND: Clouds continue to increase through the day tomorrow, as a low develops along the front to south. This feature will spread rain back across Alabama late tomorrow and into Saturday. A few showers are possible through the afternoon tomorrow, but the more widespread rain looks to arrive tomorrow night and continuing into the first half of Saturday. No severe storms, probably no thunder as the air will be cool and stable with temperatures in the 50s and 60s. Rainfall amounts for North/Central Alabama will be around one-half inch, with amounts over an inch to the south, and several inches likely along the Gulf Coast. The rain ends by the midday hours for much of the state, as the rain shifts east of Alabama, but the sky will remain cloudy Saturday afternoon with below average temperatures mainly in the mid-60s. Sunday will feature a mix of sun and clouds and highs closer to 70°.

FOOTBALL WEATHER: Both Auburn and Alabama will hold their annual spring scrimmage games Saturday. The game in Tuscaloosa kicks off at 12 Noon… kickoff in Auburn is set for 1:00. Some rain is likely Saturday morning across the state, but that will will be gone by early afternoon. Expect dry, but mostly cloudy weather in Tuscaloosa with temperatures in the 60s. Some lingering light rain is possible around kickoff in Auburn, but most of the game will be rain-free with overcast conditions. Temperatures there will also be in the 60s.

WORLD TEMPERATURE EXTREMES: Over the last 24 hours, the highest observation outside the U.S. was 111.2F at Kayes, Mali. The lowest observation was -93.1F at Vostok, Antarctica.

WEATHER ON THIS DATE IN 1988: Death Valley, CA, was soaked with 1.53 inches of rain in 24 hours. Snow fell in the mountains of southern California.