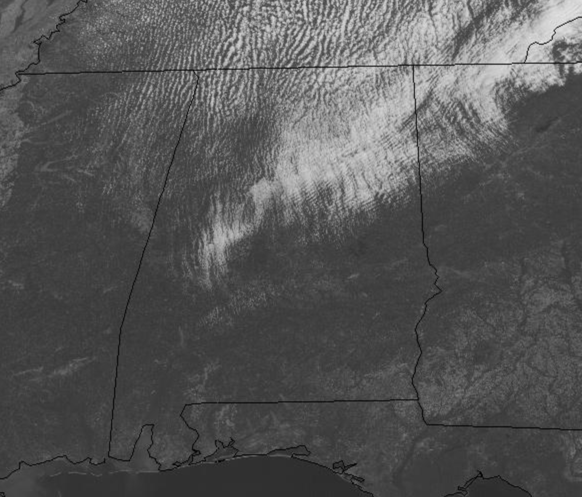 The cold front has pushed through and out of the state and has brought a down-right chilly air mass to Alabama today. The clouds are giving way to sunshine through the midday hours, and later today it will be all sunshine. 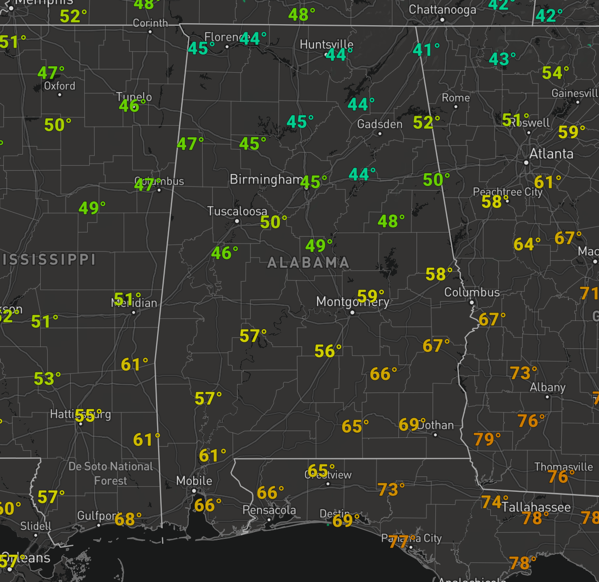 However, it is a rather cool April day with temps in the 40s, but once the sun comes out, temps will be climbing in the 50s and 60s this afternoon. Factor in those gusty northwesterly winds of 15-25 mph, and it is feeling cooler.

FROST ADVISORY TONIGHT: The winds go light tonight and with a clear sky, temperatures will have no problems falling into the 30s overnight. Temperatures will be in the 33-40 degree range, but some colder spots could hit 32 degrees or lower. Expect quite a bit of frost tomorrow morning, a classic case of a “Blackberry Winter” and in fact the National Weather Service has issued a Frost Advisory tonight for the northern third of Alabama, essentially along and north go the Interstate 20 corridor…Growers beware, precautions are needed!!! 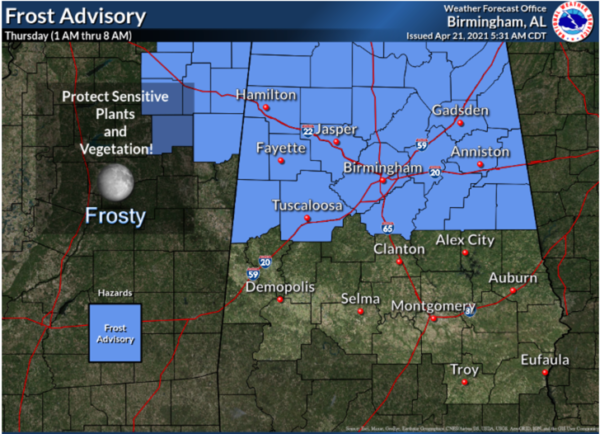 TOMORROW/FRIDAY: After the cold start to the day, tomorrow feature tons of sunshine with highs in the mid 60s. Friday will be another dry day with highs in the upper 60s to low 70s, but clouds will increase through the day as a surface low will be getting its act together off to our west. Friday night the sky will become overcast and some rain is possible after midnight.

RAIN/STORMS RETURN SATURDAY: The dynamic storm system to our west, moves into Alabama on Saturday and will bring widespread rain and thunderstorms to Alabama late Friday night and through the day on Saturday. It won’t rain constantly, and it looks like there could be two rounds of storms…an overnight/early Saturday morning round with a northward moving warm front, then a round of afternoon storms.

The SPC has a risk of severe thunderstorms for the the southern two-thirds of Alabama, essentially along and south of the Interstate 20 corridor (Tuscaloosa, Birmingham, and Anniston). This is a conditional threat, and is dependent on how far the warm front makes it, plus other parameters still need to come into play. But for now, with both potential rounds of storms, the stronger storms could produce strong winds, and there is some potential for some isolated tornadoes. All of the state will see a good soaking, with rain amounts of 1-3 inches likely. Some isolated flooding issues could develop during the day; Saturday’s high will be in the low to mid 70s.

WORLD TEMPERATURE EXTREMES: Over the last 24 hours, the highest observation outside the U.S. was 113.0F at Ndjamena, Chad. The lowest observation was -94.0F at Vostok, Antarctica.

WEATHER ON THIS DATE IN 1958: Portions of Montana were in the midst of a spring snowburst. Snowfall amounts ranged up to 55 inches at Red Lodge, 61 inches at Nye Mine, and 72 inches at Mystic Lake.