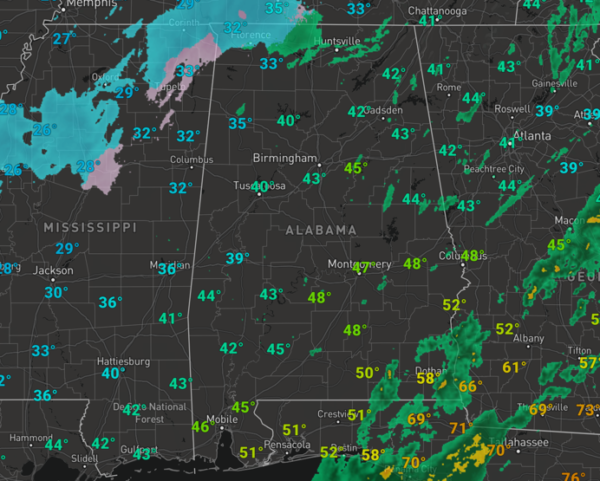 We are still seeing a few areas of drizzle and light rain across the state as we approach the midday hours and head into the afternoon, but for the most part, the precipitation continues to wind down. 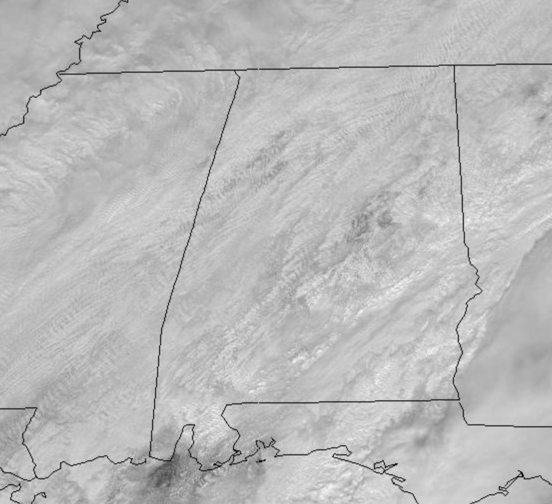 It remains mainly cloudy and cold with highs in the 30s over North Alabama, 40s in Central Alabama, and 50s for South Alabama. Heading into tonight, it will remain cloudy with some snow flurries and snow showers perhaps as far South as Interstate 20, but with a drier air mass moving, no accumulations or impacts are expected. It will be quite cold tonight with teens across North Alabama and 20s for Central Alabama, also our winds will start increasing so expect some very cold wind chills in the morning with singles digits north and teen for Central Alabama.

FRIDAY WEATHER: Tomorrow will be cold, dry, and blustery. We start the day with clouds and freezing temperatures, but through the day, the sky will clear and temps climb into the 30s and 40s. Winds will be brisk as well, gusting out of the north at 10-20 mph, giving the cold air more of a bite throughout the day.

THE ALABAMA WEEKEND: Expect a very cold Saturday morning with a significant freeze as temperatures fall into the upper teens and 20s, but then the warming trend begins by the afternoon. Saturday will feature a good supply of sunshine with highs in the low and mid 50s. The sky remains mainly sunny Sunday, and it will be even warmer as highs surge into the lower 60s. A few more clouds will appear in the Alabama sky as we head into Sunday night.

WORLD TEMPERATURE EXTREMES: Over the last 24 hours, the highest observation outside the U.S. was 109.2F at Nullarbor, Australia. The lowest observation was -66.8F at Vostok, Antarctica.

WEATHER ON THIS DATE IN 1899: While much of the central and eastern U.S. was recovering from the most severe cold wave of modern history, the temperature at San Francisco soared to 80 degrees to establish a record for month of February.