The final day of July 2022 has been partly cloudy and hot across North and Central Alabama. 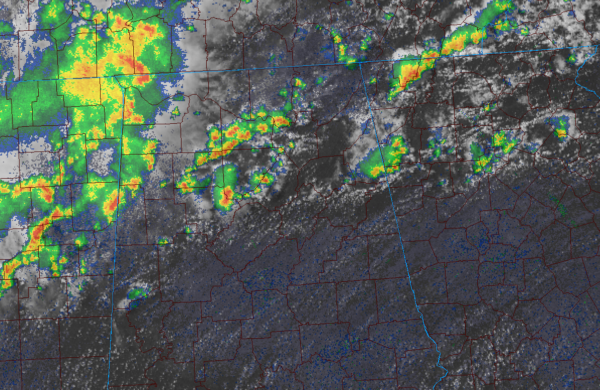 Isolated storms have been limited to the northern third of the state, as promised, but have been pretty few and far between. They have been increasing over the past hour though between Huntsville, Decatur, Jasper, and Oneonta. There were some decent thundershowers in the Gadsden area earlier. These storms are taking advantage of the better moisture in that area.

Most showers and storms were moving into Northwest Alabama from northern Mississippi ahead of a shortwave disturbance. Those showers/storms are expected to move into North Alabama over the next few hours, but should weaken quickly after sunset.

Temperatures are in the upper 80s to near 90F where it hasn’t been raining, with lower 80s in those spots. Auburn was at 93F, Birmingham 89F.

Tonight should be fair and dry after the shortwave’s showers meet their demise. A few more showers could form over the Tennessee Valley during the early morning hours.

The best chance for showers and storms tomorrow will be over the Tennessee Valley again. Looks like the stalled frontal boundary to our north might settle down into Central Alabama late Monday night and early Tuesday, perhaps giving us increased rain chances at an unusual time, during the morning hours Tuesday.