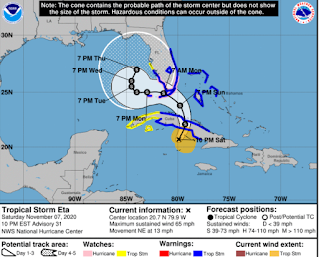 Florida Keys in the path of Tropical Storm ETA.

A good part of Florida has watches and warnings up. 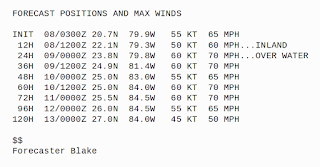 Just to be clear here, most likely this goes through the Florida Keys, Miami is on the North dirty side and gets more weather than they expect. If I was chasing I’d go down to Upper or Lower Matecumbe, somewhere between Key Largo and Marathon though this could be a Key West storm. But because there is much diversion in models and how and where it crosses Cuba is still an unknown and how strong it will be after crossing Cuba and the merging movement with the Low is more like some strange Tantric Dance than a smooth steady movement and that means this could evolve or devolve or just stall out a bit and Miami don’t need any more rain this week. Could it impact further North along the West Coast of Florida? Yes, that could happen.

What is weird is the divergence of the models in that the EURO moves this eventually into the Eastern Gulf of Mexico doing a normal, dance merging with a front and moving across land again, but the GFS keeps it out in the Gulf of Mexico for days moving westbound so we will see in real time what happens.

That’s EURO on the left for Friday.

That’s the GFS on the right for Friday. 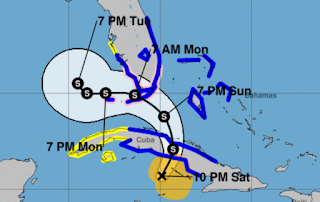 Up close and personal.

I know a parking lot in Marathon that would be wild.

Just know the NHC tonight is being cautious with any changes to the forecast, it is possible the morning Cone will be different. Sunday Morning is the time to really decide what you need to do. I said earlier Key Large to Marathon and I’d still go with that though further to the West because the Keys run East to West at that point. Key West could get this. But everyone will get weather that’s the point here. Also often when storms move off of Cuba they more often “bounce” to the right then correct their movement but November storms are more difficult to figure out than a close election. So watch in real time.

Keep reading as I wrote this about 20 minutes ago.

New advisory at the top.

Compare and contrast with what’s below from 5 PM. 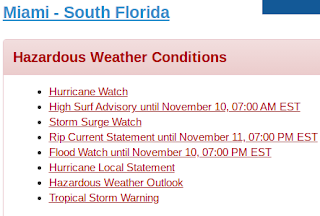 Warnings and watches up for Miami.

Is anyone watching or paying attention?

From the NHC below. 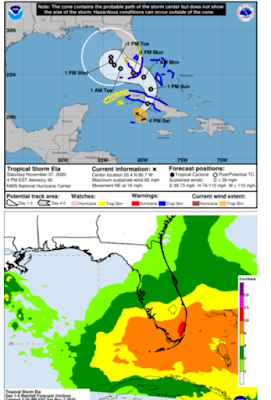 As of 7 PM Saturday Night. 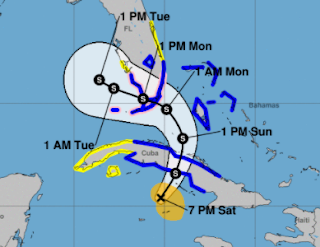 …Miami has a Hurricane Watch.

I’m wondering if anyone is watching?

But trying to get any discussion on ETA is difficult.

And that worries me….

ETA is a huge weather maker.

And that’s at worst…

..amps up the weather in South Florida.

At worst it’s a hurricane no one sees coming.

Few people love politics as much as me. I was a Political Science Major with another Major in English and have spent my life working for and in political campaigns; as a small child I was babysat on street corners by campaign workers who told me “wave and hold the sign high up” and I waved apparently thinking I was on a float at the Orange Bowl Parade. But as I watch the news tonight it strikes me that everyone I talk to in Miami is very nonchalant about ETA coming as a real deal breaker weather wise because they are talking about the election or worrying on Covid and apparently people in Florida believe there’s a shield deflecting every tropical event up the coast like Dorian or up into the Gulf of Mexico like Michael, Sally, Laura and all the other storms that got away. What if Eta does not get away and actually makes landfall in South Florida or the Florida Keys? There is a Hurricane Watch up, that is the forecast yet no one believes it will happen except for my hurricane chaser friends and meteorologists who work in the Miami area. Trust me I’m thinking on Covid, my younger brother in Miami tested positive this past week and so my mind is obsessing a bit on him that he gets well and kick this but I’m a bit concerned that ETA has been the back story and people are going to wake up tomorrow and not fully comprehend they have Tropical Storm Warning up and probably a Hurricane Warning if the NHC posts it as a Watch is already in effect as I type this waiting on the new advisory. 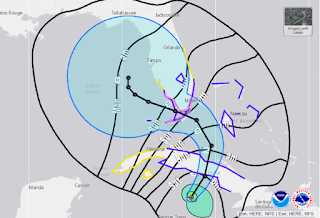 It is not forecast to be a strong hurricane.

But it can deliver a strong punch.

Especially IF the time frame verifies.

That’s a slow moving system through the Keys.

Miami would be receiving weather for a long time.

Not just an afternoon passing thunderstorm.

Rain will be there way before Eta. 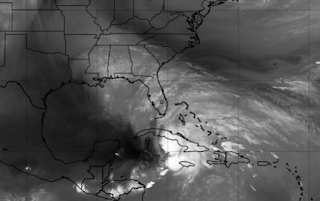 No more sunny days for a while.

What will you take in from the yard?

Pay attention this is not a drill.

Elephants counted from space for conservation