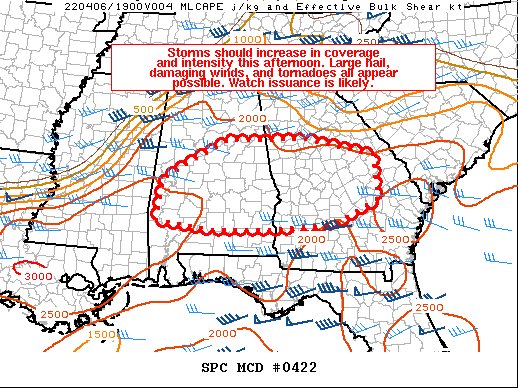 The Storm Prediction Center has just released a mesoscale discussion on the likelihood of a tornado watch being issued over the next few hours, as thunderstorms will develop in the area outlined and increase in coverage and intensity. Large hail, damaging winds, and tornadoes all appear possible with any storm that becomes severe. The probability of a watch being issued is at 80%. Here is the text from the SPC:

SUMMARY… Storms should increase in coverage and intensity this afternoon. Large hail, damaging winds, and tornadoes all appear possible. Watch issuance is likely.

DISCUSSION… Visible satellite imagery shows an outflow boundary/gravity wave extending from southern/central MS northeastward into middle TN, moving quickly east/southeastward across AL. Modest ascent associated with this boundary combined with filtered diurnal heating across AL will probably be sufficient to erode/overcome the low-level inversion shown on the 12Z observed sounding from BMX within the next couple of hours. A zone of differential heating acting as an effective warm front also extends from parts of central AL eastward across central GA. A related instability gradient is generally draped east-west across this area as well.

Storms should develop and increase in coverage along the outflow boundary across central AL by early afternoon (18-19Z), as lingering convective inhibition further erodes. Additional convection may also form and spread northeastward across parts of southern AL into central GA. This activity ahead of the outflow boundary should be tied more to modest low-level warm advection and ascent preceding a low-amplitude, southern-stream shortwave trough presently over southern LA/MS. Steep mid-level lapse rates noted on the 12Z soundings from LIX/TLH will overspread much of the surface warm sector. These lapse rates aloft combined with diurnal heating and rich low-level moisture will support moderate to strong instability, and MLCAPE of 2000-3000 J/kg appears likely by peak afternoon heating.

The region from central AL into central GA may have a relative minimum in mid-level flow, with stronger winds aloft remaining both to the north (primary upper low over the Midwest) and south (southern-stream shortwave trough). Regardless, around 25-40 kt of effective bulk shear should support a mixed storm mode, with both supercells and multicells possible. Large hail will be a concern with any discrete convection that forms initially. With time, one or more small bowing clusters may evolve and track eastward along/near the diffuse warm front across central GA. If this occurs, then damaging winds would likely become the main threat.

Finally, the overall tornado threat remains a bit uncertain, as a messy storm mode should exist. Still, enough low-level flow related to a 30-35 kt south-southwesterly low-level jet will be present to support updraft rotation and some threat for tornadoes. The best threat for embedded tornadoes with a bowing cluster may focus in central GA along the differential heating zone/warm front later this afternoon, where low-level shear should be locally enhanced.