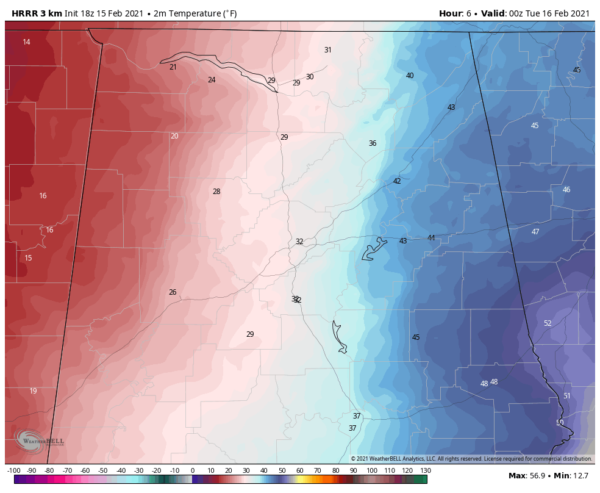 The latest run of the HRRR shows that temperatures will be dropping to the freezing point by 6:00pm tonight in the Birmingham metropolitan area. The good news is that the back edge of the precipitation will have passed through the Magic City by 5:00 pm, if not a little earlier. Temperatures will quickly fall through the evening and black ice is likely to form on the roadways, especially on the bridges and overpasses. By 10:00 pm, the temperature will be around 25 degrees, and will continue to drop to an expected low of 17 degrees.

*** Please, if at all possible, leave a little early, so you can safely make it home from work. Once the temperatures hit the freezing mark, it will not take long at all for those icing issues to start. *** 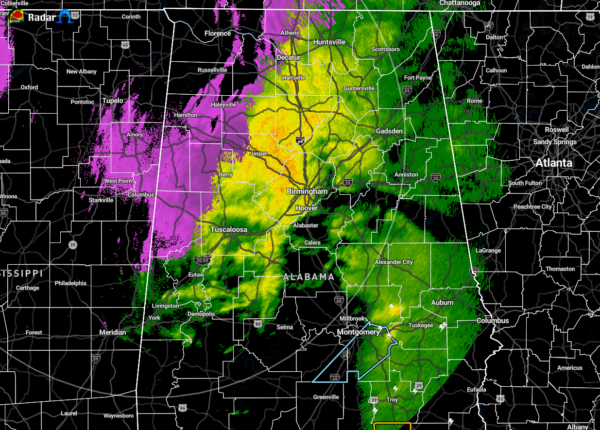 Precipitation just recently reduced from a heavy rain to a light rain Tuscaloosa, but temperatures off of the latest observation was at 34 degrees. At this point, no ice accumulations reported around the city.

Precipitation has already come to an end in the northwestern parts of North/Central Alabama, but whatever has accumulated will stick around throughout the rest of tonight and potentially through all of Tuesday and into the late morning hours on Wednesday. Temperatures are expected to drop into the upper single digits to the lower teens tonight for lows and is not expected to get above the freezing mark until late Wednesday morning.

Sleet and freezing rain continues for many locations west of a line from Ardmore to Double Springs to Aliceville. West of that line, it is all rain at this point. Thunderstorms are occurring in the southeastern parts of the area where temperatures are much warmer compared to what the central and northern parts of the area are experiencing.