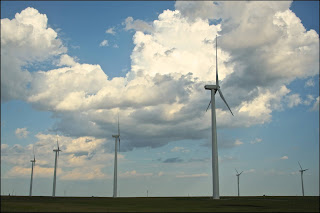 A story from the Texas Tribune was published this afternoon that allows me to demonstrate the deception that often occurs when discussing wind energy.

Power from wind turbines on Monday afternoon was between 3,500 to 6,000 megawatts, according to ERCOT, which was 1,500 megawatts lower than what the grid operator typically expects during the peak time of usage in the summer afternoons. ERCOT officials said wind output will likely increase as the week continues. [emphasis mine]

It is politically incorrect to say bad things about wind as that could get you in trouble with Big Climate which is very loud and well-financed. So, please allow me to break this down:

With nuclear, gas and coal, interruptions are usually random. With wind, the system is designed to fail when it is hottest and coldest — when power is needed the most — because meteorologically calm winds usually occur with extreme temperatures.

As more and more wind energy is installed, expect more and more of these failures. As the chief energy correspondent for Bloomberg posted this afternoon: 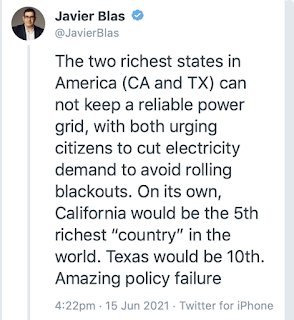 I can’t imagine why we want to continue this nonsense. There are good reasons to decarbonize energy. That can be done, safely, with nuclear. Otherwise, gas is a good alternative.

Europe has already learned this lesson and is rapidly cutting back on wind energy.

Politicians, are you paying attention?