CALM DAYS: The deep upper trough that brought clouds to the northern half of the state last night will move away this morning; we expect a good supply of sunshine today with a high in the mid 60s. The average high for Birmingham on October 30 is 71. Tonight will be clear and cool with a low in the mid 40s for most communities.

THE ALABAMA WEEKEND: Sunny weather continues tomorrow and Sunday. Highs will be in the 68-72 degree range, the low early Sunday morning will be close to 50. Don’t forget the time change; we “fall back” to standard time Sunday, so set your clocks back one hour before you go to bed tomorrow night. The sunset time for Birmingham Sunday comes at 4:54p CST.

NEXT WEEK: Dry weather continues all week. Colder air rolls into the state early in the week; we expect lows well down in the 30s both Monday and Tuesday morning. Colder spots could see a freeze, and frost is likely. The high Monday will be in the mid to upper 50s, followed by. mid 60s Tuesday and upper 60s Wednesday. Then, we rise into the low 70s Thursday and Friday. Days will be sunny, nights clear. See the Weather Xtreme video for maps, graphics, and more details.

TROPICS: Shower activity associated with a large area of disturbed weather over the Lesser Antilles and the eastern Caribbean Sea has become a little more concentrated this morning. Conditions are expected to be conducive for development of this disturbance during the next few days, and a tropical depression is likely to form by the time the system reaches the western Caribbean Sea early next week. It remains to be seen if the system will move into Central America, or turn north toward the Gulf of Mexico. If tropical storm strength is achieved, the name will be “Eta”. 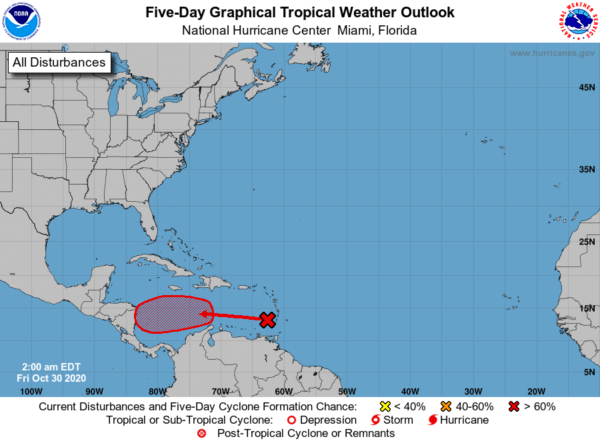 ON THIS DATE IN 1991: The Perfect Storm, also known as the No-Name Storm reached maximum strength on this day with a low pressure of 972 mb and sustained winds of 69 mph. The National Hurricane Center left it unnamed to avoid confusion amid media interest in the precursor extratropical storm. It later received the name “the Perfect Storm” (playing off the common expression) after a conversation between Boston National Weather Service forecaster Robert Case and author Sebastian Junger. The system was the twelfth and final tropical cyclone, the eighth tropical storm, and fourth hurricane in the 1991 Atlantic hurricane season. In the middle of the storm, the fishing vessel Andrea Gail sank, killing her crew of six and inspiring the book, and later movie, The Perfect Storm.

Look for the next Weather Xtreme video here by 4:00 this afternoon…. enjoy the day!