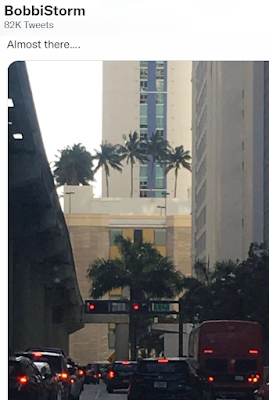 I took this picture on Monday morning while stuck in traffic in Downtown Miami when I realized that’s the pool deck where my kids live where I love taking pictures of the new Miami Skyline! I watched the sunset there the other day while wathcing them set up for the Ultra Music Festival this past weekend in the nearby Bayfront Park.

Yes, Miami has changed and it seems at times the whole city is one large construction site. Though to be fair in Raleigh it seems the whole city is being rebuilt in real time as well. Corona may have destroyed Malls, department stores and many boutiques that were not able to make it. Restaurants closed down unable to find people to work as servers, yet whole blocks of older homes have been bought, torn down and become construction projects as newer homes go up and tall Condos reach up towards the sky with cityscape views both in Miami in Brickell and Midtown there or in the fast growing Midtown area in Raleigh. The one constant has been construction dust blowing in the wind. 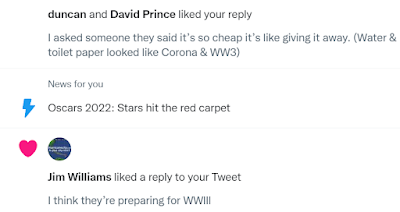 Speaking of living in real time. I went with my husband and my kids to Costco to buy some Matzah and see what Passover products they had on Sunday and noticed everyone was buying water and toilet paper. Visions of March 2020 danced in my head.  And, when I say that I mean I saw 4 carts in a row coming out with only water and toilet paper. I was pretty sure there was no hurricane on the horizon, but as a life long Miamian when I see that much water being bought my mind goes there. Some online friends suggested it was out of a concern of WW3 going down. But, I spoke to several people as well as my kids who actually go to Costco to buy water and no it’s just life in Miami. Note the water often tastes from chlorine so it’s not just a bouchie thing not to buy bottled water. My daughter-in-law said it is cheaper to buy the 48 size water than to buy 24 bottles in Publix. But in the middle of my brief few moments of checking my Twitter feed, Twitter felt the need to tell me the Stars “hit the red carpet” which is ironic in retrospect as the red carpet was nowhere near as watched and rewatched as the nonstop replays of the uncensored slapping, hitting the face of Chris Rock by Will Smith later in the evening.

It’s one of the first Oscars I have not watched and yes have even been out there years back Oscsar Weekend so generally unless it’s Passover I usually watch. Note living in LA Oscar week is worst than living in Miami near the Ultra Music Festival.  That said apparently Rock and Smith have had a long running, off and on feud like the one between Kanye and Jay Z — so was this really a surprise? Kind of messy and everyone has an opinion but it’s not the Oscars of the glam days of the 1930s nor was it as shocking as the streaker in 1974. There was talk then that the streaker was planned but who knows what was planned last night; the joke was not in the rehearsals and by the way they rehearse endlessly (I know that) so perhaps he adlibbed or just added something in the last few minutes. A lot of that adlibbing at the end going around it seems.

Who did it better?

I was at a Dinner Party at my daughter’s Sunday night she made for me and then I got busy with other stuff and didn’t watch the Oscars. My kids have big screen TVs they use to show their toddlers videos on or they use for gaming or watching NetFlix so just ignored it until my family WhatsApp Group that is pretty quiet exploded with videos of the big event and discussion on whether it was planned or a too spontaneous reaction of Will Smith to a bad joke made concerning his wife’s medical condition. Who knows… but it did sort of sully the rest of the awards. Years from now will anyone remember the Best Picture award or Best Producer or just the moment when everyone in America remembered the Oscars were on TV? In 1974 the Best Picture was The Sting and indeed the streaker may have been a funny sting for the viewers!

Lastly on a weather note there has been a lot of talk about how cold it is this March and records have been set for the high LOW Temperature in NY and other places, one record that held it’s place in  history since 1892 felt to 2022, go figure. Heavy Spring snow, which by the way is really heavy, froze an Interstate in Pennsylvannia when 60 cars piled up or rather slammed into each other and killed 3 people sadly.  So of course my first thought after “damn that’s sad” was to google the 1892 Hurricane Season and check it out to see if it could be an analog year for this year or not. Yes, I’m getting closer to that April period when everything reminds me of the ongoing hurricane season 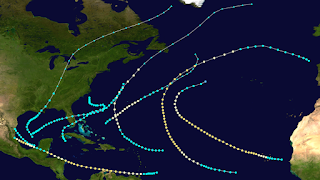 To be honest this looks similar to a few pre-season maps that some of my hurricane specialist friends have made for possible landfalls. Many say it’s a Florida season, but does that mean landfalls up in the Florida Big Bend catching fronts or hurricanes taking aim at Florida and recurving offshore as the local Floridians expect every hurricane to do until one like Andrew comes along.

Time will tell and pretty soon I’ll be back in Raleigh writing about the 2022 Hurricane Season. My tip for now is if you have a Costco card, go buy some water!

From a hotel bed in Jax where we spent the night …on my way back to Raleigh.

Ps When I was a kid and studied dance I had a crush on Gene Kelly. Every kid dancer loves either Fred Astaire or Gene Kelly the best, well until others came along. So I’ll just add…Oscars is really all about entertainment!