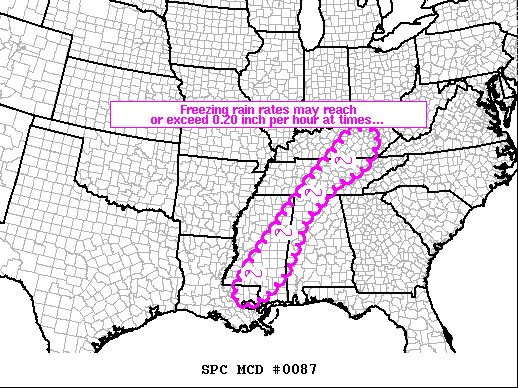 DISCUSSION
Recent radar mosaic imagery and observations indicate areas of moderate to occasionally heavy freezing rain along an axis from BTR/HUM to HSV. The precipitation was being enhanced by strong ascent associated with an upstream mid-level wave centered over Oklahoma and Texas. Impressive hourly freezing rain rates have been observed – including 0.11 inch per hour at BTR as of 8:53 am. Weak mid-level instability was allowing for localized enhancement of precipitation rates in a few areas due to the convective processes. A few lightning flashes have also been observed across Mississippi.

Over time, the band of heavier precipitation will migrate northeastward, with freezing rain becoming increasingly likely across Tennessee and Kentucky. Accumulations of 0.05-0.20 inch per 3 hours are possible (locally heavier near convection). Current observations/models indicate that areas of freezing rain have already begun south/southeast of Nashville, and heavier precipitation will begin in the Nashville area in the next hour or so. 3-6 hours of freezing rain is expected. The onset of heavier freezing rain will spread from southwest to northeast across central/eastern Kentucky beginning after around 12 pm-1 pm. The axis of heavier freezing rain will shift eastward out of southeastern Louisiana and southern Mississippi this morning (in the next hour or two), though lighter accumulations of freezing drizzle/rain and sleet may continue throughout the afternoon.

7:00 AM | *Windy, cold next couple of days and a chilly weekend…a big warm up by the middle of next week* — Perspecta Weather