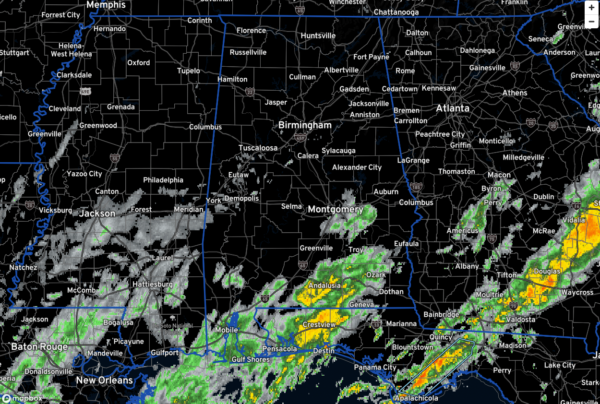 It is a cloudy and dreary day across Alabama on this next to last Sunday of January 2023.

A couple of showers were over East Alabama earlier on this Sunday morning, and even where the radar didn’t see much, observation stations were reporting a little light rain.

Temperatures started off in the 40s over all but the southern third of the state this morning. They really haven’t rebounded much yet, with widespread 40s still being observed, including 47F at Birmingham and Anniston, and 48F at Tuscaloosa, Calera, and Auburn.

Highs this afternoon will not get out of the 40s over the Tennessee Valley of North Alabama, with lower and middle 50s across the rest of Central Alabama. Lows tonight will be in the 30s over the northern half of the state, ranging between 34F at Hamilton and 41F at Montgomery and Auburn.

We will see a few breaks in the clouds right around sunset today, with partly to mostly cloudy skies on tap for tonight and a return of at least some sunshine for your Monday. It may be a little breezy at time tonight.

But the real winds will come Tuesday night. Winds will gust to 30-40 mph at times.

The potential for severe weather will exist across the southern part of Alabama Tuesday night. The SPC has edged the severe weather outlook a little further northward: 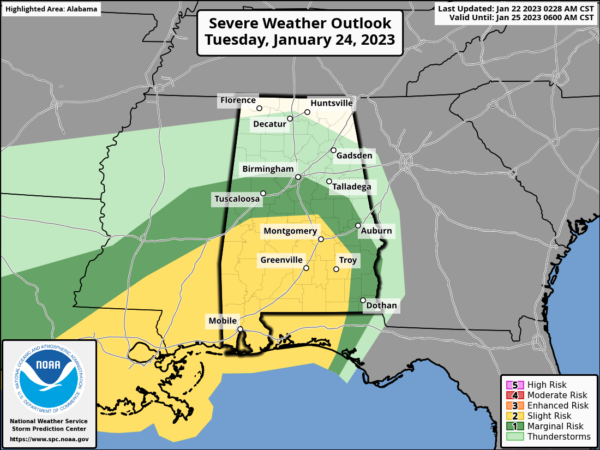 Damaging winds are the main risk, but a couple of tornadoes are possible as well.