Some late summer heat is in store for Alabama in the week ahead as we get ready to turn the page to autumn. The Autumn Equinox will occur this Thursday at 8:03 p.m. CDT. This marks the official start to fall.

DEWPOINTS RISING: Moisture levels have been rising over the past couple of days, as evidenced by dewpoints across Alabama and the Southeast. Saturday was a warm and humid day across the area with beautiful blue skies High temperatures across Central Alabama yesterday ranged from 83F at Alex City to 85F at Anniston, to 86F at Birmingham, to 88F at Tuscaloosa.

MORE OF THE SAME, JUST HOTTER: High pressure covers much of the eastern two-thirds of the United States, It is centered over the Red River Valley between Oklahoma and Texas. That high will intensify as we move into the new work week. Most everyone will be in the upper 80s across North and Central Alabama today, with an isolated 90-degree reading. Highs tomorrow will edge toward 90 degrees in most parts of Central Alabama. By Tuesday, lower and middle 90s will be common across the area. Expect the same on Wednesday and Thursday. Lows will be in the upper 60s to near 70F.

HEAT BACKS OFF BY WEEKEND: As it amplifies, it will buckle the upper air pattern over the northeastern United States. While the high will tenaciously try to hang on to its control, the eastern trough will allow a weak cold front to approach Alabama from the north and northeast. It appears that the front will slide through Thursday night, and it will be mostly dry. By Friday morning, low temperatures will be back in the 60s. Dewpoints will drop back into the 50s. This will set the stage for a very comfortable evening for high school football across the area after a warm afternoon that will see highs near 90F.

WEEKEND: By Saturday morning, a few spots in North Alabama will be in the 50s, with lower 60s across the rest of the area. Highs both Saturday and Sunday will be around 90F.

VOODOO: Indications are that a wetter pattern is ahead for Alabama in that final week of September. The GFS tries to spin up a tropical storm or hurricane in t he southern Gulf of Mexico by that time. We will see.

FIONA: Tropical Storm Fiona is near the coast of Puerto Rico about 50 miles southwest of San Juan this morning. The center of the storm will cross Puerto Rico today and emerge into the Mona Passage between Puerto Rico and Hispaniola. It is moving northwest now. It is very near hurricane intensity and will become a hurricane today as it exits Puerto Rico. It will continue moving northwest for the next 36 hours before beginning a gradual turn to the north and eventually northeast ahead of the trough over the eastern U.S. This will keep is safely offshore of the East Coast. It will be gradually intensifying as it moves along and should reach 110 mph intensity by Wednesday or Thursday. It should stay west of Bermuda.

ELSEWHERE IN THE TROPICS: There is a disturbance over the Central Atlantic. The NHC puts its chance of developing at about 20 percent. 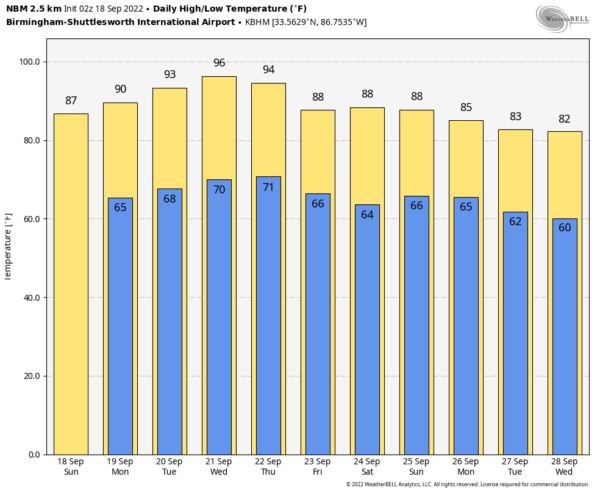 BEACHCAST: An absolutely perfect week of weather is ahead along the beautiful beaches of Alabama and Northwest Florida. There will be a chance of rain today, but rain chances will be nil through much of the rest of the week ahead. A chance of a few showers will return next weekend, but even then, the chance is small. High temperatures will be in the lower 90s, lows will be in the middle 70s. Water temperatures are in the lower 80s. The risk of rip currents is moderate at worst over the next few days.

NATIONALLY: Not much going on nationally. In fact, there are almost no watches, warnings, or advisories anywhere across the United States.
DANCING WITH THE STATS: 0.38 inches of rain fell at beautiful Lake Yellowstone, MT yesterday. It was a record for the date there.
ADVERTISE WITH US: Deliver your message to a highly engaged audience by advertising on the AlabamaWX.com website. The site enjoyed over 29 MILLION page views in the past 12 months. Don’t miss out! We can customize a creative, flexible, and affordable package that will suit your organization’s needs. Contact me, Bill Murray, at (205) 687-0782 and let’s talk.

WEATHERBRAINS: This week, the panel will entertain. Check out the show at www.WeatherBrains.com. You can also subscribe on iTunes. It’s now easier than ever to watch the show live at . You will be able to see the show on the James Spann 24×7 weather channel on cable or directly over the air on the dot 2 feed.

ON THIS DATE IN 1926: The 1926 Hurricane devastated Miami during the early morning hours of September 18th. Fifty miles west of Miami the residents around Lake Okeechobee were worried. The Lake was at a very high level after a summer of heavy rains. Through the night of the 17th, men worked to shore up the mud dike around the southern end of the Lake. As the hurricane passed south of the Lake during the morning hours, easterly winds of up to 100 mph piled water up against the western end of the Lake around the town of Moore Haven. Waves crashed over the four foot high mud dike, weakening the levee. The dike collapsed in several place, sending water over the first floor of most homes and buildings. 250 people died around the Lake. The disaster would be a prelude of an even greater disaster to come two years later. Follow my weather history tweets on Twitter. I am @wxhistorian at Twitter.com.