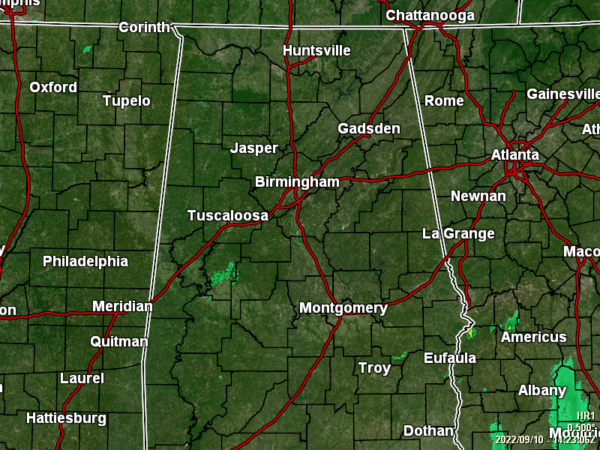 RADAR & TEMPERATURE CHECK: As of 9:28 am, skies are mainly cloudy across the area with only a few pockets of light rain over portions of Hale and Perry counties, along with another batch over portions of Bullock County. Temperatures were in the upper 60s to the mid 70s as of the 9 am roundup. Montgomery, Troy, and Tuscaloosa were tied as the warm spots at 74 degrees. The cool spot was Haleyville at 68 degrees. Birmingham was sitting at 70 degrees.

A FEW SCATTERED SHOWERS LATER TODAY: The latest run of the HRRR shows that isolated to scattered shower and thunderstorm development may hold off until much later into the afternoon and into the evening hours, mainly over the southern parts of the area and eventually moving northward. Skies will remain mostly cloudy, and I wouldn’t be surprised if a few showers form earlier than projected. Highs in the upper 70s to the mid 80s. A few showers may last into the late-night and overnight hours across the central parts of the area. The rest will be mostly cloudy and some patchy fog may develop. Lows in the mid 60s to the lower 70s.

SHOWERS & STORMS LIKELY ON SUNDAY:
A cold front will approach Central Alabama on Sunday, and will move into the area during the latter half of the day. More scattered to numerous showers and storms will be possible with mostly cloudy skies. Most activity will occur over the northern half of the area. No severe weather is expected with this front, and highs will be in the 80s. 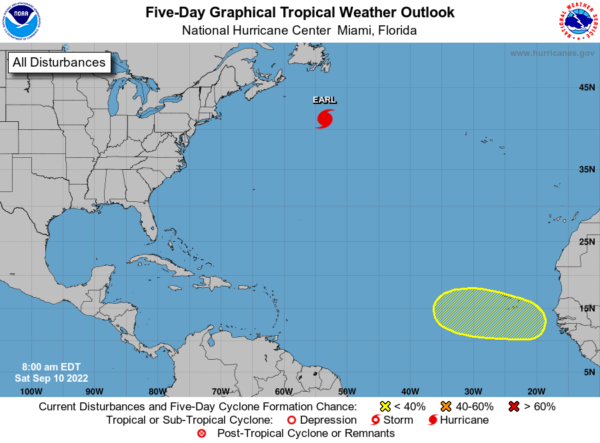 THE TROPICS ARE CALMING DOWN AT THE SEASON’S PEAK: As of 4 am, the center of Hurricane Earl was located near latitude 41.2 North, longitude 53.5 West. Earl is moving rapidly toward the northeast near 35 mph (56 km/h). A significant reduction in forward speed is expected today, with Earl moving slowly northeastward to the southeast of Newfoundland tonight through Monday. Maximum sustained winds are near 105 mph (165 km/h) with higher gusts. Earl is forecast to become a powerful hurricane-force extratropical low this afternoon. Weakening is expected during the next few days, and Earl’s winds are likely to fall below hurricane force tonight or early Sunday. Earl’s wind field is expanding. Hurricane-force winds extend outward up to 90 miles (150 km) from the center and tropical-storm-force winds extend outward up to 415 miles (665 km). The estimated minimum central pressure is 955 mb (28.20 inches).

We also have a tropical wave is forecast to move off the west coast of Africa on Monday. Gradual development of the wave will be possible during the early to middle part of next week while it moves westward or west-northwestward across the eastern tropical Atlantic Ocean.
* Formation chance through 48 hours… low… near 0 percent.
* Formation chance through 5 days… low… 30 percent.

The good news is that there is nothing else out there, especially over the Gulf of Mexico, and no new development is expected over the next five days.

ON THIS DAY IN WEATHER HISTORY – 1960: Hurricane Donna struck the Florida Keys, with winds gusting to 180 mph and a thirteen-foot storm surge. The hurricane then moved north along the eastern coast of Florida and inundated Naples before moving out to sea. Hurricane Donna claimed fifty lives, injured 1800 others, and caused more than 300 million dollars in damage. The Marathon/Tavernier area was almost completely destroyed, and in the Citrus Belt, most of the avocado crop was blown from the trees. Hurricane Donna wreaked havoc from Florida to Maine, with wind gusts to 100 mph along much of the coast. Hurricane Donna produced wind gusts to 121 mph at Charleston, SC on the 11th, and wind gusts to 138 mph at Hill Observatory, MA on the 12th. The hurricane finally died over Maine two days later, producing more than five inches of rain over the state.