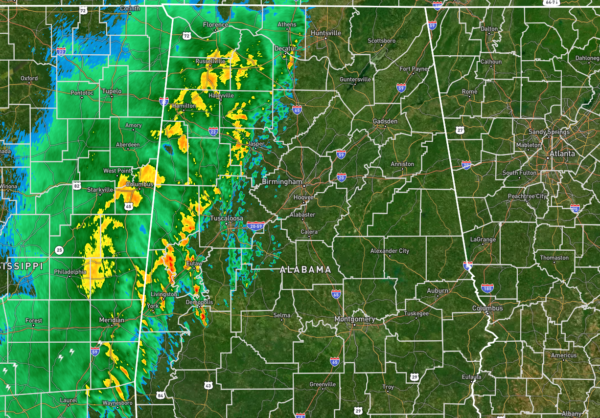 As of 10:20 am, much of the western-third of Central Alabama is seeing rain and a few embedded claps of thunder, and that activity is now encroaching into the central portions of the area. At this point, the heaviest activity was occurring around Gainesville and Boligee in Greene County. None of this activity is particularly strong at the moment, but a strong storm may be possible in the extreme southwestern portions of the area. 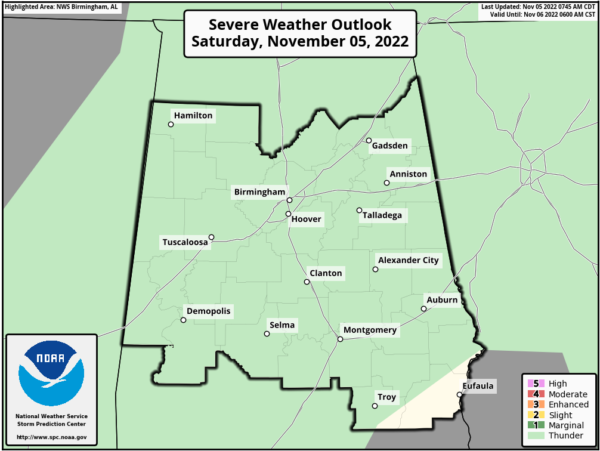 The good news is that there is no risk of severe weather across Central Alabama, according to the latest Severe Weather Outlook graphic from the SPC. There was a marginal risk up earlier this morning for the southeastern parts of Mississippi and the western parts of South Alabama, but the SPC has removed those risks.

Models are actually trending drier for Sunday as there will be a very small chance of showers during the early morning, but skies will become mostly sunny and afternoon highs will range from the mid 70s in the northwest to the mid 80s in the southeast. 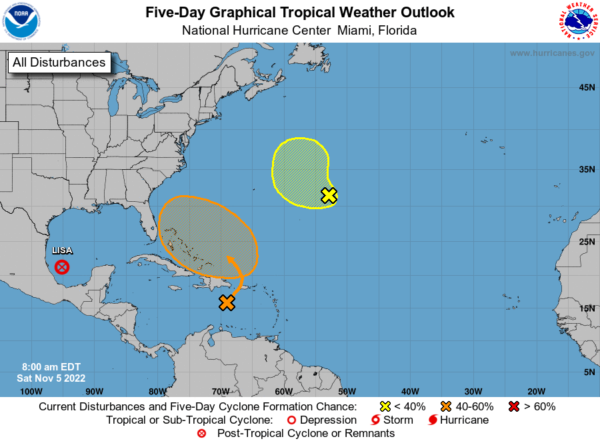 For the Southwestern Atlantic, a trough of low pressure located over the eastern Caribbean Sea is forecast to move northward over the southwest Atlantic on Sunday where a broad area of low pressure is expected to form north of Hispaniola. The system is initially expected to be very broad and disorganized. However, it could begin to acquire subtropical or tropical characteristics, and a subtropical or tropical depression could form during the early to middle portion of next week while the system moves generally westward to west-northwestward over the southwestern Atlantic. Regardless of development, there is an increasing risk of coastal flooding, gale-force winds, heavy rainfall, rough surf, and beach erosion along much of the southeastern United States coast, the Florida east coast, and portions of the central and northwestern Bahamas during the early to middle part of next week. The disturbance is also expected to bring locally heavy rainfall to Puerto Rico and the Virgin Islands this weekend. It has been given a 60% formation chance through the next five days.

For the Central Subtropical Atlantic, showers and a few thunderstorms located several hundred miles east of Bermuda are associated with a non-tropical area of low pressure. The circulation of the low has become better defined since yesterday, and a slow tropical or subtropical development of this disturbance is possible during the next two to three days. After that time, the system is forecast to encounter stronger upper-level winds and further development is not anticipated. It has been given a 30% formation chance through the next five days.