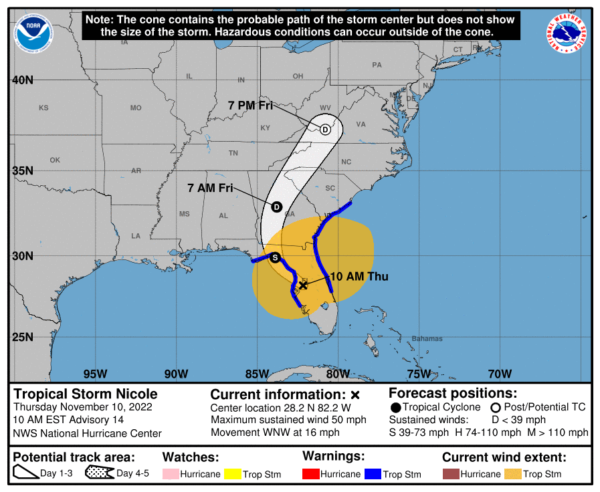 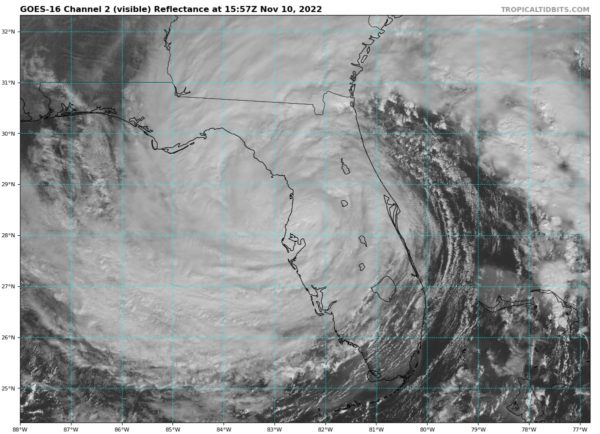 DISCUSSION AND OUTLOOK
———————-
At 1000 AM EST (1500 UTC), the center of Tropical Storm Nicole was located near latitude 28.2 North, longitude 82.2 West. Nicole is moving toward the west-northwest near 16 mph (26 km/h). A turn toward the northwest and north-northwest is expected later today, followed by a turn toward the north tonight. Nicole is expected to accelerate north-northeastward on Friday. On the forecast track, the center of Nicole will continue to move across the west central Florida peninsula this morning and emerge over the far northeastern Gulf of Mexico this afternoon. The center should then move across the Florida Panhandle and Georgia tonight, and then move through the southeastern United States on Friday.

Maximum sustained winds have decreased to near 50 mph (85 km/h) with higher gusts. Additional weakening is expected this morning while the center is over land. Little change in strength is expected while Nicole is over the Gulf of Mexico this afternoon and evening. Nicole is expected to weaken to a depression over Georgia tonight, and then it is expected to merge with a frontal boundary over the Mid-Atlantic United States by Friday night.

2. A dangerous storm surge is expected along portions of the east-central and northeastern coast of Florida, portions of coastal Georgia, and the Florida Big Bend along the Gulf coast. The storm surge will be accompanied by large and damaging waves along the Atlantic coast. Residents in the warning area should listen to advice given by local officials.

3. Do not focus on the exact track of Nicole since it is a large storm with hazards extending well to the north of the center, outside of the forecast cone. These hazards will continue to affect much of the Florida peninsula and portions of the southeast United States.

4. Nicole will produce heavy rainfall today across the Florida Peninsula. Flash and urban flooding will be possible across portions of the Florida Peninsula along with renewed river flooding on the St. Johns River. Isolated flash, urban, and small stream flooding will also be possible on Friday in the Southeast through the central Appalachians, including the Blue Ridge Mountains, and extending northward through eastern Ohio, west central Pennsylvania, into western New York by Friday night into Saturday.