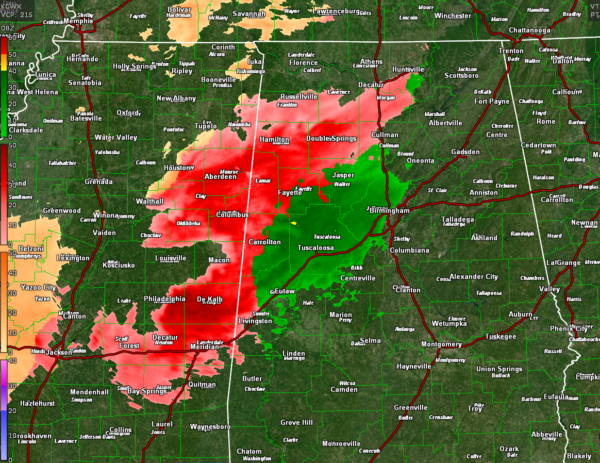 A large area of freezing rain and rain is moving through eastern Mississippi and West Central Alabama this morning. The areas in red are receiving freezing rain, with the green and yellow echos indicating a cold rain. 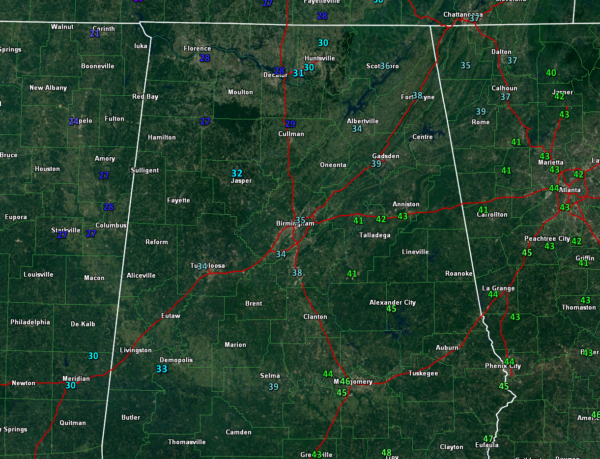 The issues are occurring in areas that are at 32F or lower. It’s 27F at Haleyville and 31F at Huntsville International. Tuscaloosa has 34F, Birmingham 35F, and Calera 38F. It’s 33F in Demopolis.

Freezing rain is falling in western Sumter and Pickens Counties. Even heavier precipitation is poised to move into these counties shortly. Freezing rain rates could approach a tenth of an inch per hour.

In North Alabama, bridges and overpasses are already icy from last night’s precipitation. A wreck was just reported on I-565 in Huntsville.

To the west, sleet, snow, and freezing rain is falling across much of Central and northern Louisiana. Lots of lightning is being observed now in Central Louisiana with temperatures in lower 20s! In Louisiana, State Police report that all roads in the northwestern part of the state are now impassable. A crippling ice storm is occurring from Shreveport to Monroe across Northern Louisiana.

Severe weather is possible today over extreme Southeast Alabama, Northwest Florida, and southern Georgia. A few significant tornadoes are possible in Northwest Florida from Panama City to Marianna to Tallahassee.