With a southwesterly flow over the area, moisture levels will be on the rise today. With the heating of the day, we can expect scattered to numerous showers and storms to form during the late morning through the afternoon. Shower chances will continue through the late-night and into the overnight hours. Highs in the mid to upper 80s.

Sunday’s weather will not be much different, as more scattered to numerous showers and storms can be expected to form during the heating of the day and continue into the evening. Highs in the 80s.

Troughing will be just off to our west on Monday that will keep a southwesterly flow over the area. With a few impulses expected to move through the area, we’ll continue to see scattered to numerous showers and storms at any time, with most of the activity occurring from late morning through the early evening. Highs in the 80s.

Nearly the same story on Tuesday… scattered to numerous showers and storms will continue to be possible, especially from late morning through early evening. Highs in the 80s.

Wednesday’s weather will be similar to Tuesday… more scattered showers and storms will be possible at times, especially from noon through 7 pm. Highs in the 80s.

A low will start to develop off to our southwest that will increase the flow of moist air over Central Alabama on Thursday, that will make scattered to numerous showers and storms likely at times. Highs in the lower to mid 80s.

And at the end of the forecast period on Friday… That low will move up into the western parts of the area and weaken, while another low forms just off to our south. That will keep scattered to numerous showers likely at times throughout the day. Highs in the lower 80s. 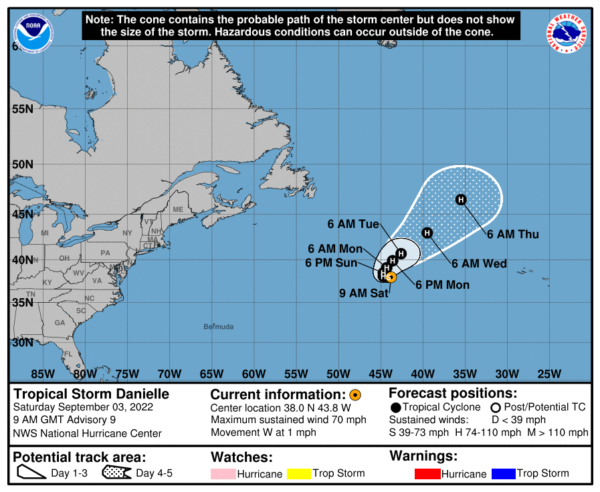 As of 4 am this morning, Tropical Storm Danielle was located over 900 miles to the west of The Azores and was crawling to the west around 1 mph. Maximum sustained winds were around 70 mph. Danielle is expected to strengthen back into a hurricane while staying nearly stationary over the next couple of days, followed by an accelerated move to the northeast into open waters. 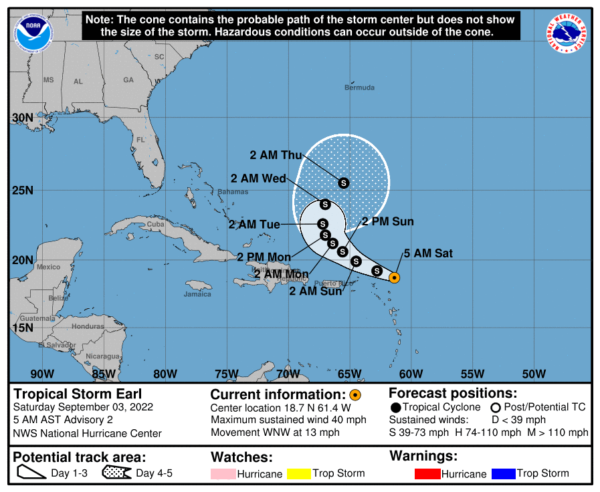 We also have Tropical Storm Earl that was located around 115 miles east-northeast of the Northern Leeward Islands and was moving to the west-northwest around 13 mph. Maximum sustained winds were around 40 mph, and some slow strengthening is expected over the next five days. Earl is also expected to curve back out over open waters away from land, and just like Danielle, will only pester the fish.

The good news is that there is nothing else out there, especially over the Gulf of Mexico, and no new development is expected over the next five days.