Talking to a friend online.

They so want the EURO’s support.

So let’s look up close and personal. 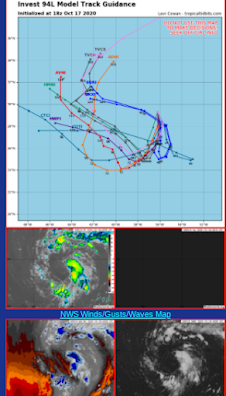 So why does it do that?

This time of year in the “tropics” and that includes the Mid Atlantic area (not the coast, the actual Atlantic) fronts move down, move out …then a high buiolds in (dark purple being dry) and pushes down a bit, then an opening opens up but depending on the strength of the front or the high it snaps shut and that’s why you get those odd October storms that draw huge scribble scrabble tracks across the Atlantic. Yet sometimes you get one that can come close enough to the East Coast to cause real trouble, so you can’t count them out totally. Speaking of counting things out those two healthy waves South of our Invest with 80% chances are nice, strong, healthier than they should be westbound waves.  Yeah, some of the energy will get pulled North and depending on what Epsilon does many things can or can’t happen. But they can also get into the Caribbean in time for the party to happen.

A few late season waves. The front near Florida. 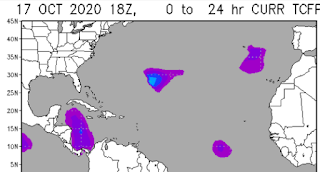 Regarind models……. spent some time looping models. Yes, GFS does odd things with a looping Zeta near Florida, yet if the high snaps shut as the CMC shows that’s not such an odd track afterall for deep into Fall. Another funny or lets say ironic thing about ZETA is that Miami for years had a Classic Rock Station named ZETA and it changed music styles over the years but it’s a name Miamians are very familiar with … if it does indeed form in the Caribbean and threaten to move close to South Florida.

Meanwhile we are still waiting for Epsilon to form. I had the TV on mute earlier and the local weather was on and they did the tropical update and because I leave the closed captions on for when I’m on mute I realized they translated what the meteorologist said wrong and said that the next named storm forming in the Atlantic most likely will be named Abasalon. I giggled. So much for computers.

Have a wonderful weekend. I’ll update Sunday morning at some point. This post was just for me and a few friends and anyone who wanders in…

Sweet Tropical Dreams and may you always have good health and good radio stations!