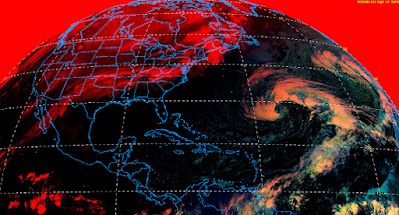 Invest 99L Out in the Atlantic.

A front is draped across the SE.

Reinforced by moisture from the EPAC

Arctic Fronts not dipping DOWN yet.

What goes up… pushes something down.

…is what cyclones are all about. 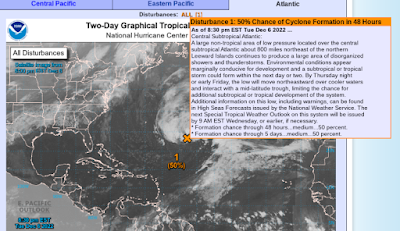 NHC on the fence.

Out there …going nowhere. 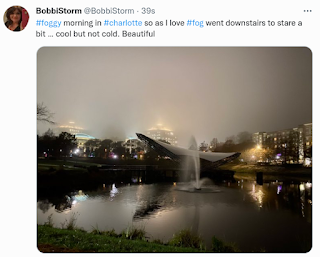 As for me…. it’s a foggy morning in Charlotte and that’s where I’m at and of late it seems to be my second city. Though on my Weather App it’s my third city after Miami that still is officially second.  Fog always makes everything seem a bit surreal and I like that. Weather is a muse and it makes a writer feel poetic as words and thoughts flow easily when meteorologically inspired. The climax of The Great Gatsby takes place on the Longest Day of the Year when it’s so hot and there’s no air anywhere; hope I didn’t spoil that one for you.

My first trip to Charlotte I drove in with my husband after driving up through Georgia and South Carolina on a December foggy evening and the Queen City was cloaked in the thickest fog I’ve seen since I left LA. The lights of the city just appeared far off in the distance like a colorful, alien glow til the shape of the hotel finally came into view partially hidden by the fog. Yes, it was that thick. Miami rarely gets a fog like that though in Santa Monica one year the fog “rolled in” fast and furious and we had to race outside to bring everything inside that was set up for the afternoon lunch on the patio as fog… low lying, fast moving clouds rolled in so fast that before the whole buffet was taken inside you could not see the garage. I knew I was not in Miami anymore…….

Tropical breezes almost all year round. If you like weather that rarely dips below 75 degrees as a high and is usually  more like 90 degrees then Miami is for you, if not try San Diego where it’s warm, dry and is prone to cool mornings and very little rain.

Enough weather talk I have things to do and places to go while here.

Have a great day.

Hope you get the weather you’d like. As for me I’d like winter weather right now, but it’s a process in December and we aren’t there yet.