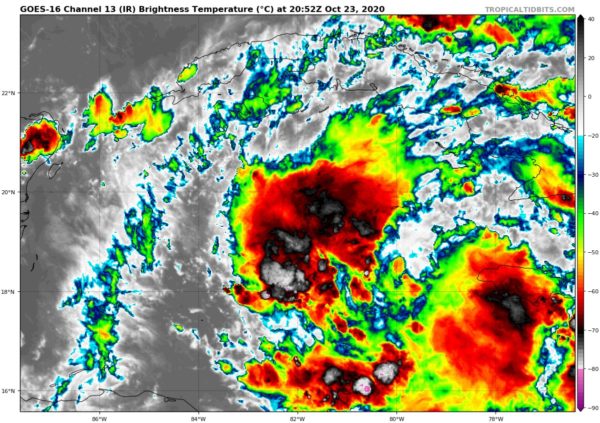 NHC UPDATE ON INVEST 95L
Satellite images and radar data indicate that the broad area of low pressure located just west of Grand Cayman Island is gradually becoming better defined. Environmental conditions appear conducive for further development, and a tropical depression will likely form during the next day or two while the low drifts toward the northwest. The system could move near western Cuba by Sunday and move slowly across the southeastern Gulf of Mexico by early next week. Interests in western Cuba, the Florida Keys, and southern Florida should monitor the progress of this disturbance. Regardless of development, locally heavy rainfall will be possible over portions of the Cayman Islands, Jamaica, Cuba, southern Florida, the Florida Keys, and the northwestern Bahamas through the weekend.
* Formation chance through 48 hours…high…70 percent.
* Formation chance through 5 days…high…70 percent. 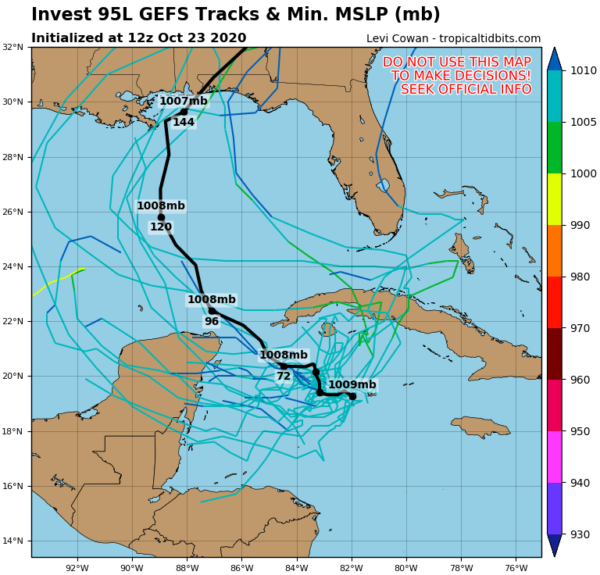 The mean of the GEFS members has the center of what could possibly become Tropical Storm Zeta splitting the gap between Cuba and the Yucatan Peninsula and moving onshore on the northern Gulf Coast. We’ll have to watch as we may see some effects up here in Central Alabama, mostly rain and some breezy conditions. No severe weather as we’ll be on the calmer and less-active left-side of the circulation. We could see some of that activity up this way within the next 5 to 6 days from now, around Wednesday or Thursday. A lot can change between now and then, so we’ll keep you updated. 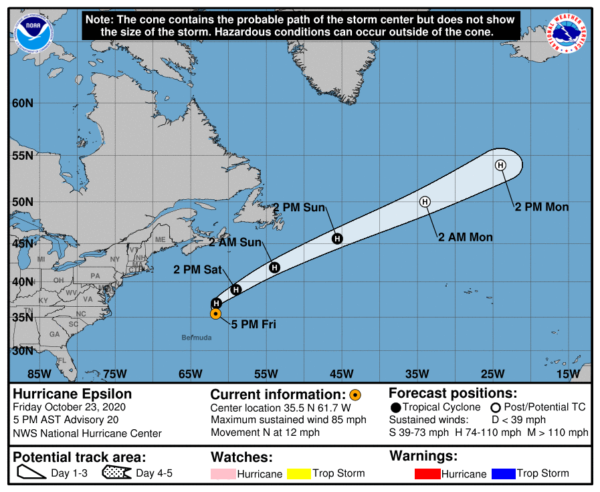 NHC UPDATE ON HURRICANE EPSILON
The latest update from the NHC has the center of Epsilon around 285 miles to the northeast of Bermuda and moving north at 12 MPH. A general northward motion is expected to continue through early Saturday, with a very fast forward motion toward the northeast anticipated early next week. The maximum sustained winds remain near 85 MPH with higher gusts. Some fluctuations in strength could occur for the next day or so before gradual weakening begins on Sunday. Epsilon could lose tropical characteristics late Sunday.

Large swells generated by Epsilon will affect Bermuda, the Bahamas, the Greater Antilles, the Leeward Islands, the east coast of the United States, and Atlantic Canada during the next few days. These swells are likely to cause life-threatening surf and rip current conditions.