The latest Tropical Weather Outlook was just released by the NHC and it states that Invest 95L continues to get better organized and a tropical depression will be likely by this afternoon or evening if the trends continue. Hurricane Hunter reconnaissance aircraft is currently en route to the system to investigate. Here is the text from the NHC:

Satellite, radar, and surface data indicate that an area of low pressure located about 125 miles west-southwest of Grand Cayman Island continues to become better organized, and if current trends continue, advisories will be initiated on a tropical depression this afternoon or evening. Environmental conditions are conducive for further development while the low drifts toward the north and northwest this weekend. The system could move near western Cuba on Monday and move across the southern Gulf of Mexico or the northeastern portion of the Yucatan Peninsula on Tuesday. Interests in western Cuba and the Yucatan Peninsula should monitor the progress of this low. A NOAA Hurricane Hunter reconnaissance aircraft is en route to investigate the disturbance this afternoon. Regardless of development, locally heavy rainfall will be possible over portions of the Cayman Islands, Jamaica, Cuba, and northeastern Yucatan through early next week.

Model members continue to show a northwestward movement across the Gulf of Mexico before making a curve to the north just before landfall on the northern Gulf Coast then turning northeast and moving across the Deep South. The mean of the members has the center making landfall around Biloxi in five days (Thursday) and eventually moving through Central Alabama and eventually into North Georgia and the Carolinas.

If this plays out like it’s modeled, we could see tropical moisture start to move into the area as early as Wednesday and stick with us possibly into Friday. Much of the area will be on the calmer side of the center but the southeastern parts of Central Alabama may be on that more active side with heavier rain and the potential for a brief spin-up tornado. BUT… we are still way too early to know exactly what is going to happen and we’ll start to get a better idea as the system continues to get better organized over the Caribbean Sea and eventually over the southern Gulf of Mexico.

If this strengthens into a tropical storm, it will be called Zeta. At this point, the model members are roughly leaning toward it becoming a tropical storm, but several members keep this as a depression, so we’ll have to wait and see. 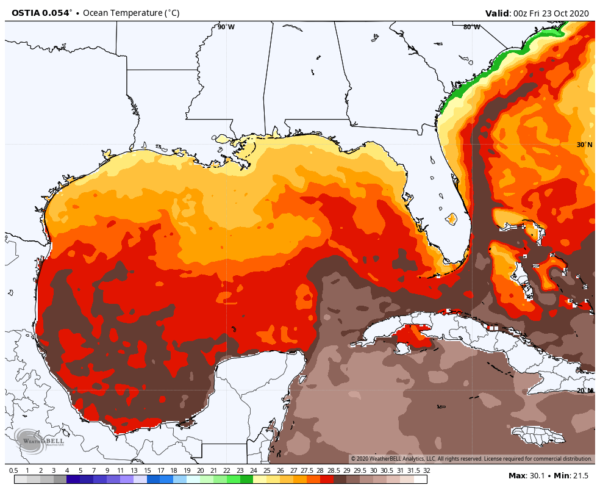 Sea surface temperatures where the system is currently located are running right around 30ºC or 86ºF, more than warm enough for a tropical system to develop. Those temperatures do drop off somewhat as you move closer to the US Gulf Coast, but those are still in the 25ºC-27ºC range or 77ºF-81ºF range. Those cooler waters are still warm enough to either maintain strength or perhaps slightly weaken the system as it gets closer to shore. All of that will be dependent on the possibility of drier air being pulled into the system or if wind shear may disrupt the convection, both of which would inhibit strengthening and may cause weakening.

We’ll continue to have updates throughout the weekend and into the start of the workweek.

Elephants counted from space for conservation