Fast blog this morning and I will update this afternoon in depth more. The area of most concern has finally been highlighted in the Caribbean with a 70% red chance of development. This is, in my mind, pretty much a done deal. And, at the same time I’ll say I’d spend less time worrying on what is East of the Bahamas with fronts on the move and a nonstop messy vertical flow that will pretty much suck the moisture North in the constant flow. Though it was worth keeping an eye on the constant attention given it has seemed flawed in that the real concern for tropical development was down in the Caribbean. And, I’ll add this area has given birth to more systems than just off Africa or the Gulf of Mexico. 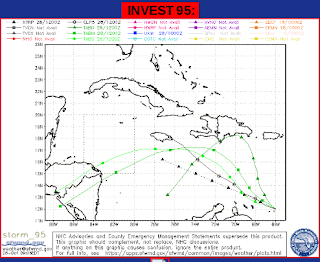 Models currently keep this South of Cuba. High pressure to the North as well as SHEAR will make a track such as Ian’s very unlikely. While development is likely, the current track keeps it down in the Caribbean. Down the distant road opportunities can always happen for it to do something odd (we are really in a November pattern even though it’s October 28th) and so we should always watch what’s down below, it’s good to know that currently the models keep it South and hopefully weaker. 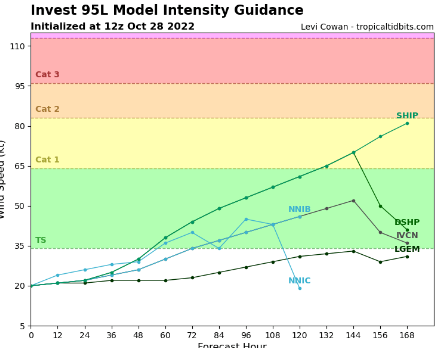 Waiting for a center to form …
..as always models better after a center forms. 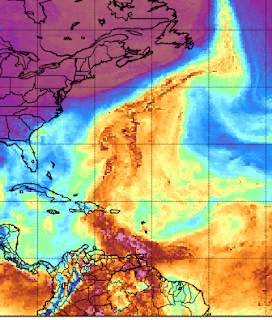 Note concentation of color near 95L
Energy to the N is there but compromised.
Due E of Carolinas u can see the other area. 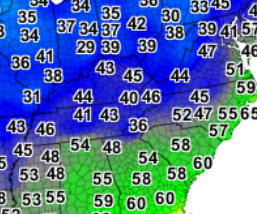 Anytime you have such a set up in the Atlantic you watch the base of the trough. I’ll add though that once 95L forms and moves West and pulls away fom that zone, you can always have development closer in to the North this time of year … closer in to our coasts. Not very tropical off the coast of the Carolinas, though sometimes subtropical storms form and often the energy from the offshore system can get wrapped up (caught) by the next approaching front.
So as always keep watching the tropics while you enjoy Pumpkin Spice Latte (I just ordered more from Nespresso) while debating buying Egg Nog flavored candies. Anytime you have that period where one season fights with another there is always an opening for something tropical or subtropical to form. This time of year brought us Sandy as well as the Perfect Storm so we never count it out.
My husband who was raised in upstate NY told me it felt “frosty” this morning in Raleigh, not frost on anything but it just felt colder than expected. Folks from way up North always have coloful words for “colder than I thought” … so do those of us in the South but they can be a bit more colorful!! The Maple tree outside my window that usually is red aound Thanksgiving is turning red in spots this morning and the views on the drive back from Chalotte yesterday were pure heaven to anyone who loves Fall color. 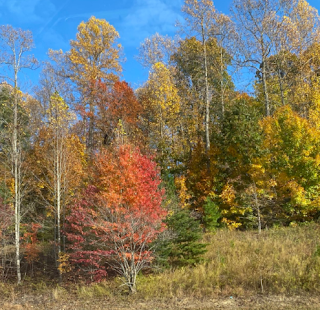 Raleigh has a lot of pines and oaks, than other areas nearby that have more hardwoods than Pines but they do punctuate the colors beautifully with that dark vibrant green showing off the various gold oaks, red maples, yellow poplars beautifully. While it’s beautiful to look out across an area all yellow or red, the mixture to me is incredibly beautiful. AND… IF YOU WANT TO GO SEE FALL COLOR …. DO IT NOW! I keep hearing on TWC how “peak color” in certain areas are later in November, trust me that’s an average and if they check with their local experts they will know that the peak will have peaked by the time you get there. Can’t tell you how many trees had already lost their leaves or only had a few yellow leaves still spiraling down to the ground that is littered with fallen leaves. So if you don’t go this weekend, you may miss it. Just saying.
I’ll update this afternoon but for now, it’s worth knowing a named storm will form in the Caribbean and the area off the East Coast is still there but iffy and how it interacts with other weather systems is the question. Until the next really strong diving cold front comes down this has become a semi-permanent feature in the Atlantic and you can see 95L consolidating at it’s base. To the North, only time will tell…
I’ll update later today. Stay tuned!
Enjoy….