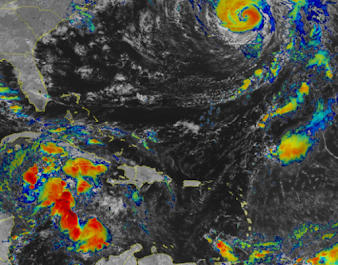 Isn’t the world a beautiful place as seen from a model that looks as if it is painting a portrait more beautiful than any that Van Gogh even did and he did a whole lot of portraits! Hurricane Epsilon looks like a bright yellow sun up in the heaven and Invest 95L looks like a red scropion down in the Caribbean debating where it wants to go after it crosses Cuba.

I went to sleep a bit late last night after the big debate and woke up around 5:30 AM and promptly fell back to sleep until 10 AM. I never sleep til 10 AM. After looking at what wasn’t Invest 95L when I fell asleep I was greatly amused that overnight based on a few model runs and a “look” the NHC went from nothing to something really fast and we were suddenly at 60% in the 5 day and the 5 day would impact parts of Florida possibly so everyone is back on board the boat that barely 24 hours ago people didn’t think would ever float.

Visible Imager on the left of the “center”

Earthnull on the right showing a center ish area.

Shows a few things but won’t discuss that now.

I wouldn’t call it a strong circulation yet.

But it’s getting there one hour at a time.

This is why I talk about a pattern set up and how it’s better to watch the flow in the atmosphere more than just whether or not the EURO has joined the GFS in an unholy union creating a hurricane somewhere that everyone feels could actually form. It’s late October and we watch the Caribbean and there has been consistent convection and Earthnull has showed a weak signature and models have given iffy support off and on so you ignore the models and you wait for it to develop and it it indeed it seems to be developing. Remember this is the same system the NHC pulled the plug on and then rushed to plug it back in once again as I pointed out the other day as all other agencies and sites were assigning possibility percentages as if it was the line in Vegas saying something will develop in the Caribbean eventually.

So let’s look close up at Invest 95L

Scorpions can have a real sting to them. 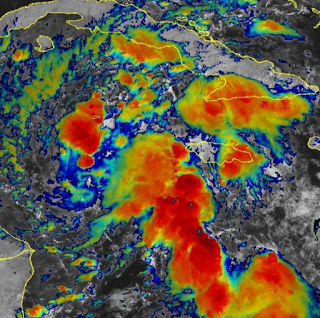 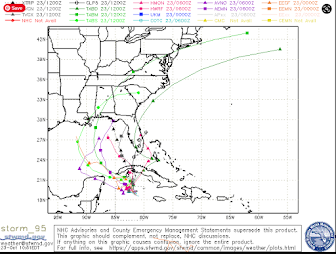 Yes, they are not very helpful.

Well it lifts out of the Caribbean.

That is for sure. 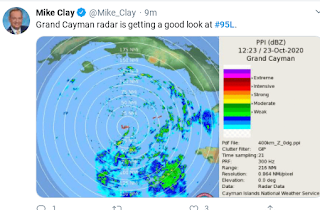 It’s on radar out of Cuba.

Cuba is watching it carefully.

But where is it going really? 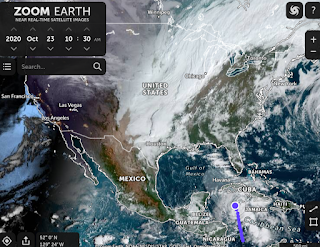 Here’s our view from Zoom Earth.

A great site to use.

Note the huge front to the North.

This is the formation zone for what would be Zeta. 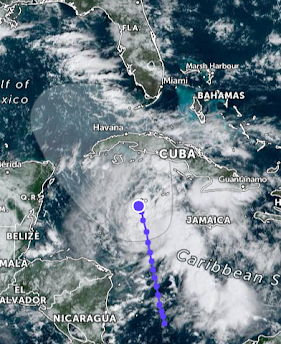 So the real problem is obvious and I’ve talked on it often online and here and that is it all depends on what the frontal boundary does and each model right now is feeling up one part of the elephant and putting out their own headline “ZETA HEADS INTO THE GULF OF MEXICO!” and another model is all excited and screams “ZETA SLAMS MIAMI!!!” and yet another model shouts “ZETA FORMS AND RUNS UP THE COAST OF FLORIDA”  and you think to yourself …”wait, which coast the West coast or the East coast” and then you see the last model and that one shoots it off towards Louisiana and you think “oh no that can’t happen again” and everyone all at once in a loud choir from their individual homes screams “when is 2020 gonna end??” and the answer is… not yet, it’s not over yet so buckle up and settle down and get a grip and wait for this to form, wait to see how strong the front really is and wait for a few more model runs.

It’s also logical that something forms and heads into the Caribbean and the strong convection gets sheared to the East over Florida and we’ve seen that set up more often than the stars shine at night and the moon eventually goes full. Or it develops much the way the GFS said and EURO hinted at in long term models several days back and slides off of Cuba and moves towards South Florida and then does it go to the Bahamas or slide up the coast? It is possible if the front is strong that the front grabs it and runs with it up the coast, but what if the strong Halloween front doesn’t go Boo and goes OOPS and stalls out and then what? Late October and early November bring so many odd possibilities track wise so let’s wait and see what develops, where it develops and how strong the cold front is in real time. 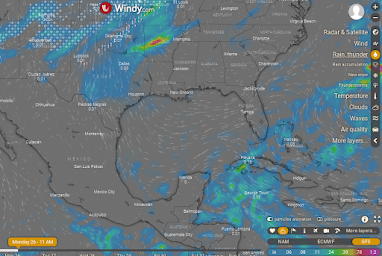 The GFS God Bless it is advertising snow in New Mexico and the Panhandles of Texas and Oklahoma, I’ve got friends there and the snow stole my attention from the blue tropical moisture in the Caribbean. Other models hint it stalls, falls apart or pushes through and stops and ….well whatever you get the idea, it’s too soon to know for sure so check back later as the old Magic 8 Ball loves to say. 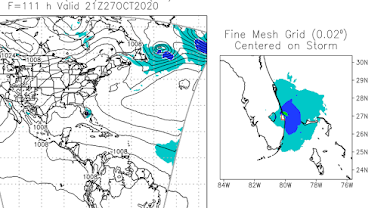 Oh and yes there is always that model.

Forms off of Miami Beach kind of….

… I can promise Florida gets more rain.

…after the next model runs.

And the satelites fix themselves a bit.

But hey isn’t this arty fartsy? 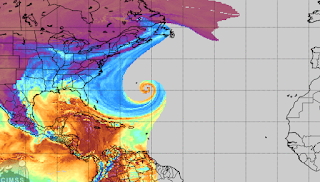