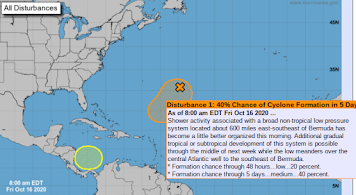 Another colorful view of the Tropics. 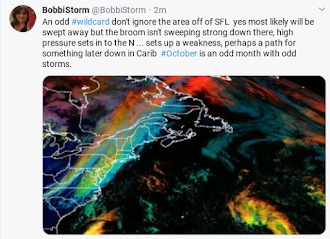 Note the area on either side now of South Florida.

Down in the Carib…

How do these interat down the road? 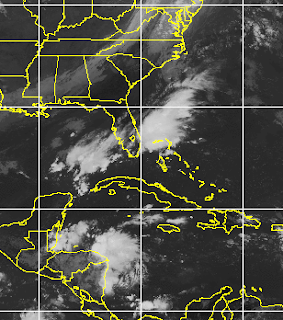 Oh and any cold front goes flat and…

…snaps back as a warm front often in October.

So let me make this clear … I am obsessing on the area off of South Florida that I was watching last night, and my kids sent video of crazy lightning (note Miami Kids see that all the time so it has to be unusual as thunderstorms don’t impress them much.  I’m looking at steering currents out ahead of a system developing, before the front moves in and then it goes flat and stays there a bit as high pressure to the North builds in briefly before the next front … each front gets stronger but it’s not November in Miami it’s October and that is why Miami got Wilma. I’m looking at “influencers” who make a diffence in the atmosphere and it bugs me that models show the Caribbean system where the Florida Blob is today but down the road. Patterns exist and if you don’t believe me then remember Laura and Delta or Katrina and Wilma in 2005 so stay tuned but remember it is very possible whatever tropical energy comes out of the Caribbean ends up along the East Coast so after Florida from the Carolinas to New England (NY included) needs to watch the interplay and tropical drama between the front next weekend and something coming out of the tropics.

As for the Atlantic system that I do think will become Epsilon … could be some odd October Surprise because hey it’s 2020….so nothing is off the table.

A bit late today here but wasn’t feeling it.

I want to update later after the next model runs.

But for now here goes with 94L

And 95L should be the Carib soon.

ATL has 40% chances and is an Invest.

Carib has 30% but good model support.

As usual the Euro this year is slow to go.

The GFS is ready to party.

Problem is could the party be on South Beach? 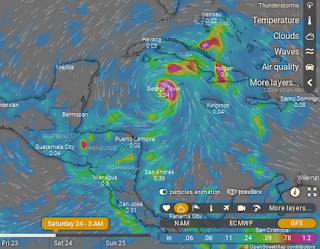 Continunity in modeling is important.

GFS and others have consistently shown this.

Then it crosses Cuba…. 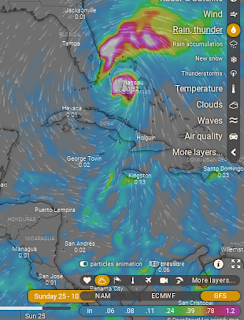 The EURO comes on board…

Oozing together with the front.

Then the whole East Coast could be n play.

I said “could” remember that.

Nothing has formed yet. 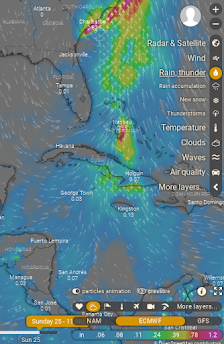 but GFS starts wrapping it up in the Carib.

Models flip flop a lot til something forms.

So there’s something there……..

Models murky in ways yet all see it.

Climo calls for it.

I’m going to update this afternoon after the models come in and see what has changed if anything as well as watching the actual water vapor loop, mimic and such to see how strong is the front and the next front and where I believe low pressure will set up in the Caribbean. As for 94L it has a strange retrograding track that takes it to the left currently vs right out to sea but eventually with fronts in play it will indeed go out to sea.

My concern is will a system form South of Florida and impact Florida as well as ride the East Coast with a front in a similar but different way to Isaias way back when?

Stay tuned. For now 94L looks a lot like a Parrothead. It probably wants to do Margaritaville in Key West or Hollywood Beach or even Myrtle Beach but don’t think it has enough gas in the tank to get there so let’s just keep watching.  Have a wonderful weekend!

Ps… a video I made below that may or may not show up in the blog. Blogger wants you to use YouTube but on every run of the blog it either shows or doesn’t show. Again FOR NOW nothing is there it’s all Florida speculation like how they used to sell swamp land to the tourists up North.

WILL PROOF LATER so forgive me any typos it’s raining in Raleigh my allergy is making my eyes go crazy after a few days of not and cooler weather is coming and then my allergies are way better. Please make winter come soooon! Thanks