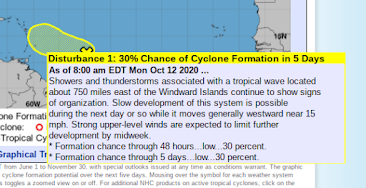 This is Invest 93L 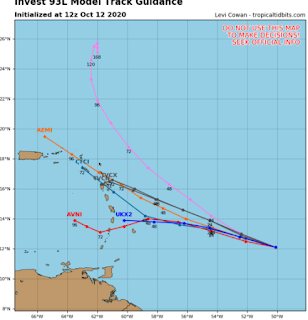 These are my thoughts on Invest 93L and the future of the tropics this week. It’s very possible that something gets into the Caribbean be it this system or something flares up down there and depending on the timing it will lift up towards South Florida, Cuba and or the Bahamas. Models show a low pressure area in the Carib forming, I’m not sold on the exact ignition of this situation but I’m sure that something can form down there the question is what.

Sometimes this time of year a diffuse elongated African Tropical Wave moving towards the Islands can slide into the Caribbean with a small center while much of it’s convection goes up over the islands and gets swept away as if Mother Nature swat at it with a broom. Again fronts are the drivers of tropical systems this time of year.  Satellite imagery shows some signs of a center trying to form better seen on visible imagery, but it’s a murky picture so hoping to update later in the day with a better one. We are in a time will tell stage. For now the IR imagery shows it best so using that one here. 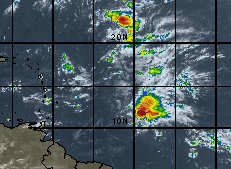 Note here the lower part of the wave with intense color.

But note also the top part of the way moving away.

So where do we go from here…..

Later this weekend a window for development opens up in the Carib, is it this wave wandering Westbound? Possibly models differ but part of it should get into the Caribbean. Something in the Caribbean should form somewhere around the 20th to the 26th time frame period. Until then watch the tail end of any front that goes flat and yeah they are going flat and going stationary and sometimes they back up as a warm front. A period of warmer weather is forecast and then a cold front comes through later this week in the Southeast. Let’s see how this plays out in real time.

Note also something could form closer in, near the Bahamas if and that is a big IF part of an old front draws in tropical energy from the top part of this wave. Again waves are vertical, North to South clusters of convection that can often produce a Tropical Depression and often produce two areas to watch this time of year without a huge high propelling it fast towards the West and tail ends of fronts calling out beckoning the top part of the way to join them for a tropical party.

Today there is nothing going on, other than this Invest that could always pull itself together fast, come to life and then get weak for a bit wandering West. Time will tell. It’s currently at 30% so keep that in mind, because many online are hawking development today and I’m not sold on that currently but maybe later today… it’s still early for me to change my mind.

Today is my day to get back on track and take care of things after being offline and preoccupied for the last few days.

I’ll update later today with some videos from both Mike from Spaghetti Models that went chasing with Delta as did Jim Williams as did pretty much every chaser around. Money was made by that Motel 6 down there, because every chaser around was staying there.

That part of Louisiana being slammed by 3 hurricanes needs help and I don’t see concerts or fundraisers which is sad, real towns and cities with real people get overwhelmed and homeless after hurricacnes, multiple hurricanes, yet when New Orleans is in the news it’s on the air everywhere and when Charleston gets slammed with Hugo every influencer of the day was there trying to raise funds but when backwater towns where people live have their lives ripped from them after three hurricanes in the area … lifes goes on with the election and Covid. Mike is right on that, come October no one cares about hurricanes and yet October brings the meanest hurricanes. People need to ramp up the caring and give to their most trusted charity or the Red Cross if you don’t know of a local charity you know you can trust.

www.redcross.org  There are other good charities but if you aren’t aware of one please give to the Red Cross because they are there doing their thing or trying…

Ps til then enjoy some Autumn October visuals of the beautiful Appalachian music with a beautiful picture to meditate on a bit and if you want to see the Fall color you better hope on the bus gus because those strong cold fronts are going to blow those Autumn Leaves away soon.

Saint Elmo’s Fire displaying itself on the windshield of an Airbus A300.

Cliff Mass Weather Blog: The Election Day Weather Forecast: Who Will it Favor?

Zeta is a Little Stronger as of 10:00 pm : The Alabama Weather Blog

Saint Elmo’s Fire displaying itself on the windshield of an Airbus A300.

Cliff Mass Weather Blog: The Election Day Weather Forecast: Who Will it Favor?

Zeta is a Little Stronger as of 10:00 pm : The Alabama Weather Blog