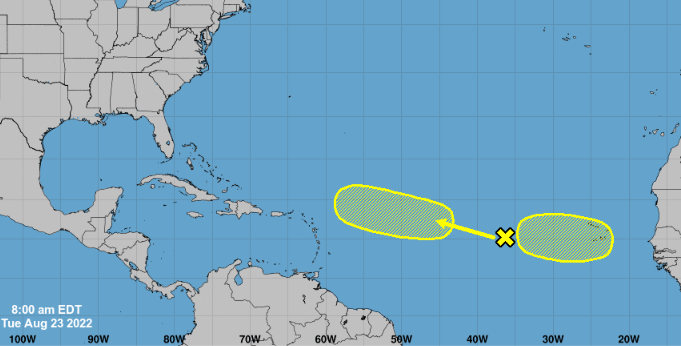 Well there’s the image from the NHC that we have been waiting for to show up. The second wave that many feel is the stronger candidate for tropical development. The lead wave Invest 90L has lost lots of it’s oomph and chances are decreasing for development. The yellow bouncing ball is passed behind it to what could be 92L. 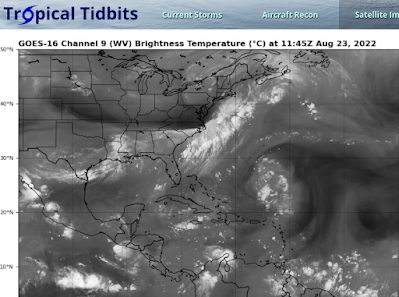 On our side of the world, the Water Vapor Loop shows us a stuck, stalled out front that will at some point rain itself out. The models were extremely good at nailing the threat of flooding in Texas and the South from this stalled out front. We see a large dry air to the North pushing slowly down and East. A large Upper Level Low, known by many names, that isn’t a Low to worry on though sometimes they can work down into the atmosphere after injesting too much moisture. Lots of sloppy leftovers from previous waves that did not develop. Waves have had problems developing and yet, forecast models show that the MJO is moving into town and giving the town a whole new coat of paint and possibilities.

The models shown below are for Invest 90L As 90L is barely there, it is most likely IF it continues as an entity we can pick out on the satellite loops it will trend further West and stay lower. So err on the side of the lower models going West vs the ones that are chasing the ghost of the hurricanes that were seen on earlier runs. That is not to say it cannot bounce back as many do, as I explained in the previous post. 90L was a large wave and large waves have a harder time finding their true center and only after finding a true center will a wave develop and then feel the pull of the Poles to go North, otherwise it’s westbound into the Caribbean and they take their best shot later… if there is a later. 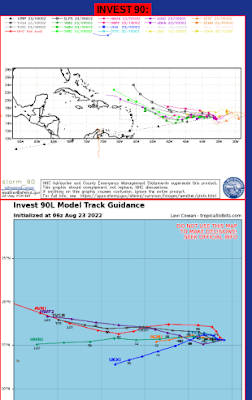 My problem is that the new wave doesn’t look all that great yet. It looked great over Africa a few days ago and now it looks like a shriveled up shadow of itself over Africa. 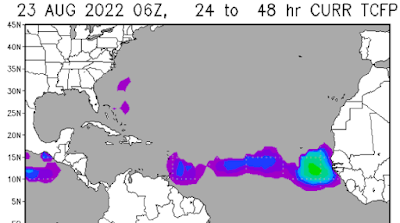 There are still chances in the ITCZ that’s now all hot to trot.

Off the East Coast slivers of possibilities.

Meteorology is all about math afterall.

Below is the infamous GFS

The GFS has an Early September to remember in the tropics.

This run has most of them scaring people and then… 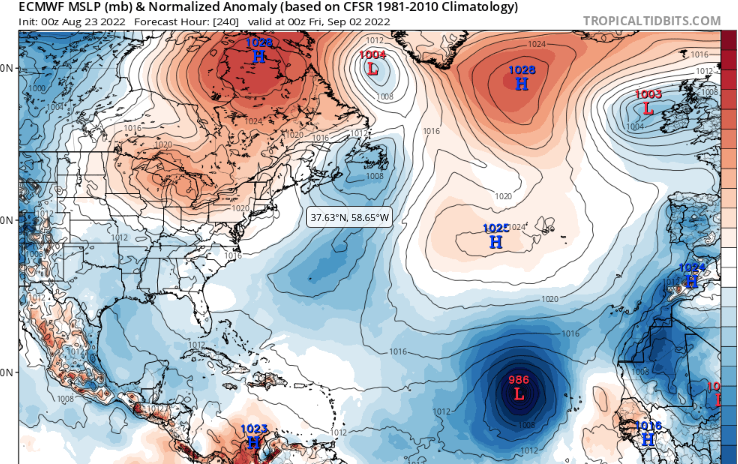 Meteorology is about models also.

Models are tools, meant nicely, to help us forecast.

The EURO above sees nothing til early September.

The truth may lie somewhere in between.

There are other models aside from the EURO and the GFS, good models but they have not earned their wings yet or dislodged the GFS (American Model)  or the EURO from their throne. This is a Game of Thrones in ways.

Two things to say today. One is that I am packing to go to Miami for a variety of reasons and may get their Wednesday if the plan remains the plan. I really need a bit of a vacation and as much as I love Miami it’s never quite a vacation as I usually have fifteen things to do in seven days. But, trying to stay focused and also trying to relax and enjoy a road trip watching the world go by a bit. The plan is to be back before Labor Day obviously and start September back in Raleigh. One of the things I am going to is a memorial program at the month mark of my friend Sharon’s passing; it’s in her honor and memory and this was usually her time of year. She loved weather and most of all tropical weather and she was glued to The Weather Channel always as well as watching in real time any time Bryan Norcross spoke. In truth, she liked him before Andrew that made him famous as he said more than the others and went deeper into modeling and discussion rather than parroting back the NWS and NHC forecast. Her gut was almost right when it came to the tropics and though she didn’t understand the dynamics of tropical meteorology she was good at reading the satellite loops and the signs that nature shows us.

That brings us to the 2nd topic and that is the anniversary of ANDREW that apparently was 30 years ago back in 1992 and everyone is talking about it today, especially with a lack of named storms to steal our attention. Thirty is a big number and it’s a relevant anniversary this year as that year in Miami was hot as hell, beastly hot and the hot air hovered there a real tangible thing. The mango trees had three blooms, two happens often but three rarely. The Almanac mentioned a hurricane and many who used to do the Almanac the way people watch oddly reliable sites on YouTube talked on a hurricane coming this year.

This NOT Invest 90L 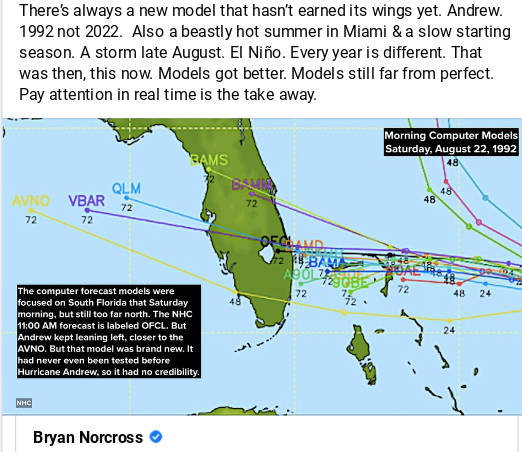 Pretty sure Sharon would want to hear what he has to say about NOW more than about Andrew as Andrew is now apparently ancient history, when models were first really being used and new models were popping up with promise and old models were being thrown in the trashcan. The Aviation Model was newer and better.  Oddly the forecast went with a rather weake hurricane catching a trof and missed in both weakness of that trof and the strength to which the High would build in and the models also missed the rapid intensification offshore as it leaped from Cat 1 to Cat 2 and then leapfrogged to Major Hurricane to Category 5 just offshore staring down South Florida that literally was in panic mode and could not wrap their head around how this all escalated so quickly. There was no water to be found at Publix, the local watering hole, but Sharon and I had water because Sharon insisted that we WERE HAVING A HURRICANE this year and she had 70 bottles of washed out Publix Soda bottles stored away, constantly rotating the older bottles and refilling then with water as her brother in Maine told her the water would go bad after a while; fine for washing but not for drinking. As Sharon was doing it, I did too because well you know how it goes with best friends…. “sure why not” and I did have an awfully lot of water to drink and wash with as well as kids complaining about “all the bottles of water” everywhere. I also kept every extra “to go” Heinz ketchup the Pizza shop would give out with the French Fries (who uses that much ketchup really) and despite their annoyance with that they were happy to have it when we had no power for way over a week, can’t even remember exactly how many days. But we had Mayo, Ketchup, Peanut Butter as well as old bread and Matzah (wonder bread sold on Passover that never goes bad ever) and well you get the idea.

Sharon didn’t believe the forecast nor the models. She knew it was weak, it looked like crap and the front was dying out (it was August she’d keep reminding me) and the High looked to be building in and we were getting that hurricane. Of course no one expected a Category 5, Sharon loved hurricanes and was routing it in (sorry Miami) and so that was the way it was 30 years ago.  I had a family guest in from California, a lot going on and I was a bit distracted with family drama and I trusted Sharon’s gut.

It went from this ….

…doesn’t that kind of familiar?

To this rather quickly. 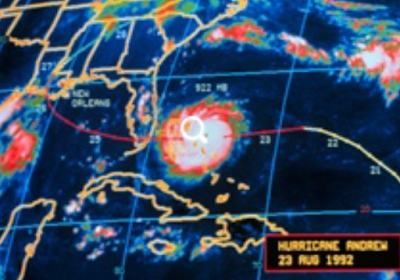 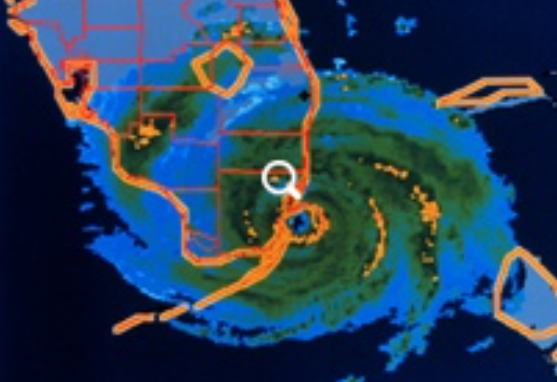 Take aways from the Andrew Anniversary:

1. Forecasts are easily busted when something changes fast in the atmosphere.

3. Models miss a lot and are often wrong and updated quickly.

4. There’s always a new model everyone thinks is better.

5. Worst case scenarios can happen and will eventually.

6. At some point every city’s luck runs out.

7. Better to be prepared than to be stuck in Publix with nothing but canned oysters!

Those are may basic take aways and I will add always trust your best friend’s gut when they have been proven to be right time and time again. Trust that the atmosphere is fluid and in motion and will change when you least expect it. Trust CLIMO at some point weighs in and hurricanes happen.

Everything changed the year after Andrew in subtle ways. Some of the best times in my life actually, and I’ve had a few wild times probably more than most people. New people came to town, the town didn’t look the same, we had gone through a crazy period where nothing was normal and we wanted to party again and laugh and enjoy life and we did.

Learned that from Sharon.

Don’t be lulled into a false sense of reality because you think the hurricane season is over, it’s not over.

Ps… not proofing, I can do that later rushed for time and gotta go!

A very old song that came to mind when watching the satellite loops this morning trying to discern something about the new wave in town. Stay tuned. It’s not over til it’s over……..