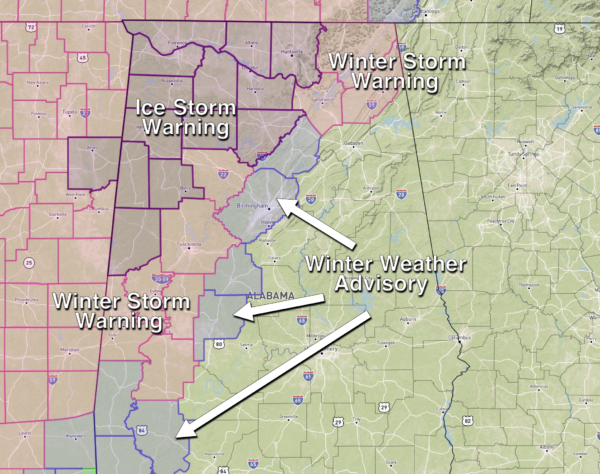 The primary concern is for ice accumulation in the ice storm warning area; some spots across Northwest Alabama will see ice accumulation of 0.25″ to 0.50″ due to freezing rain that is moving into the state this morning. This will be enough to bring some power outages, and travel will be difficult if not impossible. 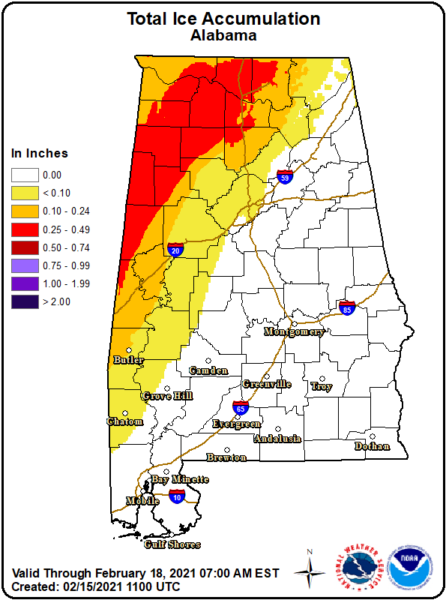 To the east of the ice storm warning, a cold rain will fall today with temperatures in the 34-44 degree range, and the precipitation should be mostly out of the state by 6:00 p.m.

CITY BY CITY: Here is what we expect today for some of the major cities in North/Central Alabama…

BIRMINGHAM: Cloudy with a cold rain late this morning and this afternoon. Temperatures will be in the mid to upper 30s; no icy travel is expected as the rain falls. But tonight (after the rain ends), temperatures will fall through the 20s, and black ice will likely become an issue on bridges and perhaps some road surfaces. Be aware that travel impact is a definite possibility for the Birmingham metro tonight and tomorrow morning. Temperatures will have a hard time climbing above freezing tomorrow, and some ice issues on roads could linger into Tuesday night and Wednesday morning. We rise into the 40s Wednesday and any lingering ice will melt.

TUSCALOOSA: The situation will be much like Birmingham; mostly a cold rain, but the potential for black ice on roads and bridges will begin this afternoon as temperatures drop below freezing… that will continue into tomorrow morning.

ANNISTON/GADSDEN: A cold rain is likely, ending tonight. Temperatures in East Alabama will be close to 40 as the rain falls, so there is no threat of freezing rain. But, we can’t rule out some scattered black ice tomorrow morning where water remains on roads as temperatures drop well below freezing. There are no advisories for this part of Alabama.

FLORENCE/MUSCLE SHOALS: Freezing rain and some sleet will fall again today. Ice accumulation of .25″ to .50″ is forecast, with potential for a little snow on top of the ice before it ends. Roads and bridges are already icy and dangerous, and conditions will only worsen today. Power outages are also possible. Temperatures hold in the 20s.

HUNTSVILLE: Freezing rain and some sleet here also. Ice accumulation of around .10″ to .20″ is likely. Roads and bridges will likely become icy and dangerous; isolated power outages are possible.

SOUTHEAST ALABAMA: We should note while an ice storm will unfold for North and West Alabama today, there is a risk of severe thunderstorms over the southeast corner of the state today around Dothan, where the air will be unstable. 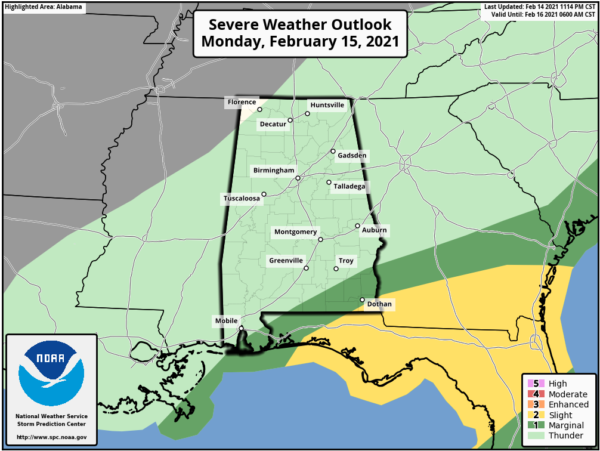 Temperatures will drop quickly late this afternoon and tonight, and “black ice” will become a problem on bridges and some roads in the winter weather advisory areas. Some scattered black ice is even possible over East Alabama tomorrow morning. We project a low between 10 and 20 degrees tomorrow morning, with potential for a few single digit readings over Northwest Alabama where ice accretion is high.

Tomorrow will be cold and dry with some sun, but temperatures will likely remain below freezing for the northern third of the state, and icy roads over Northwest Alabama won’t show much improvement.

WEDNESDAY/THURSDAY/FRIDAY: Temperatures rise into the 40s Wednesday, so any lingering ice on roads should melt by midday. Then, the next storm system will push another batch of precipitation in here Wednesday night and Thursday. This one looks like mostly rain for the state, although some freezing rain or sleet is a possibility for the northwest corner around the Shoals as it begins. Rain will end from west to east Thursday afternoon, and another shot of cold air rolls in Thursday night and Friday. The northern third of the state won’t get out of the 30s Friday despite a clearing sky.

But, the good news is that this will be the last in the series of cold air shots for a while.

THE ALABAMA WEEKEND: The weekend will be dry with a mostly sunny sky Saturday and Sunday. The big news is a warming trend… we rise into the upper 50s Saturday, and low 60s Sunday.

NEXT WEEK: Highs will be in the 60s through much of next week… we will have a chance of showers Monday, and then again at mid-week Wednesday. No risk of snow or ice through the week; See the Weather Xtreme video for maps, graphics, and more details.

ON THIS DATE IN 1982: A “meteorological bomb” exploded in the Atlantic southeast of Newfoundland. The term is used to describe a storm that rapidly intensifies. An intense cyclone off the Atlantic coast capsized a drilling rig killing 84 persons and sank a Soviet freighter resulting in 33 more deaths. The storm produced 80 mph winds that whipped the water into waves fifty feet high.

Look for the next Weather Xtreme video here by 3:00 this afternoon…. enjoy the day!